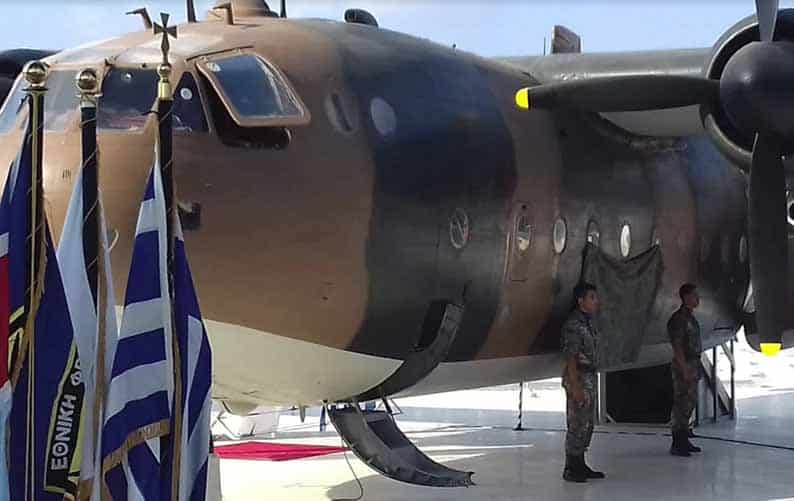 An aircraft, similar to the Noratlas transport plane which was shot down by friendly fire during the 1974 Turkish invasion, was unveiled on Friday by Cyprus President Nicos Anastasiades, in a sombre ceremony marking the 44th anniversary of the Turkish invasion.

In his address, Anastasiades said the new Noratlas, dedicated to the Greek commandos and crew of the originals who were killed during operation NIKI 4, in the early  hours of Monday, July 22, 1974 and a memorial, dedicated to the ‘mother of the missing, unveiled Thursday, constituted a reminder of the state’s debt to present and future generations to reach a “just and viable solution of the Cyprus problem and to find out what has become of each and every missing person.”

Anastasiades said the ceremony was “a minimum mark of respect and gratitude” to those who died. He acknowledged the failings of successive governments to excavate the site where the plane was buried to give closure to the families and allow a proper burial.

The president unveiled the plane in the presence of the ministers of defence of Cyprus and Greece, as well as the Chief of the National Guard and the Chief of the Airforce. The unveiling followed a memorial service for army officers and soldiers killed during the invasion which took place at the Makedonitissa Tomb.

Political party leaders, religious and military leadership and other officials also attended and wreaths were laid in honour of all those who perished.
Greece was represented by National Defence Minister Panos Kammenos, Georgios Varemenos, Second Deputy Speaker of the  Greek Parliament, as well as representatives of Greek fighters’ associations and relatives of the crew on board the fatal flight to Nicosia.
“We will continue their fight in defence of the Republic of Cyprus. We shall strive to reach a just, functional and viable solution of the Cyprus problem,” Anastasiades said.

He assured that the government would continue its effort to put an end to the unacceptable stance of Turkey and establish what had happened to each missing person on the basis of specific proof.
“We will continue trying without giving in to reach a solution which will guarantee the territorial integrity and the full sovereignty of our country,” he added.

He also expressed the “Cypriot people’s gratitude for Greece’s longstanding support in the effort to end occupation and to reunify our country.”
Noratlas, along with other Greek transport planes, set off in an operation code named “Victory”, to transport a battalion of Greek commandos from Souda, Crete, to Nicosia, to help in the heavy fighting that took place at Nicosia International Airport. The Greek aircraft however, were caught in friendly fire, which resulted in the loss of 31 men and the destruction of three aircraft.
Sixteen of the commandos, whose bodies were located at the site of the crash, were buried in Lakatamia military cemetery. One commando, Thanasis Zafiriou, survived the crash. He died in September 2016. The remaining commandos and crew were found inside the Noratlas plane when it was recently unearthed. The remains of 13 were identified and returned to their families. Three commandos are still missing.

Sanchez resolves US visa issue, to join United on tour