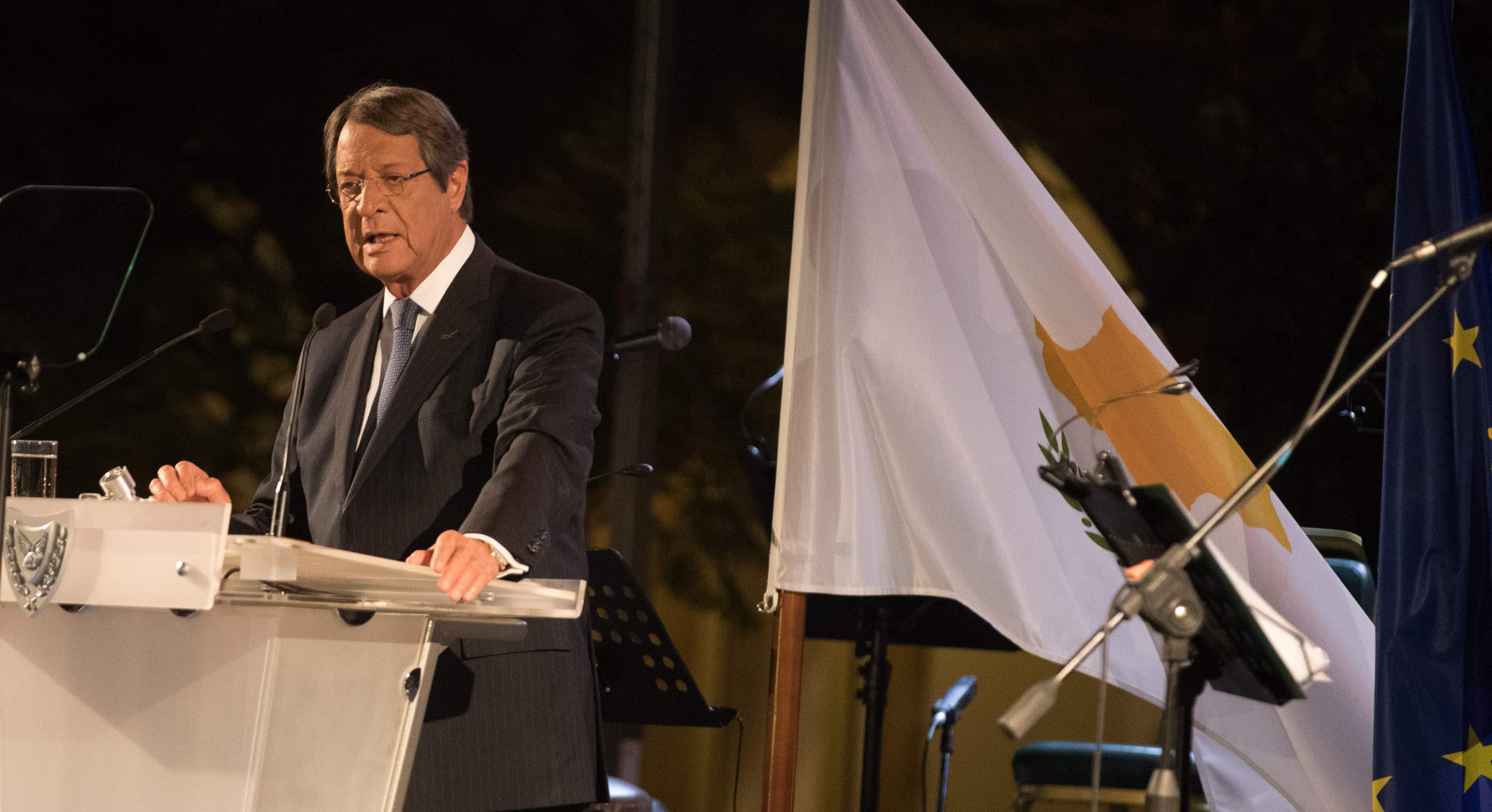 Turkey’s stance on Cyprus has not wavered for more than four decades, President Nicos Anastasiades said on Friday night.

He was speaking at the presidential palace at an evening event to mark the 44th anniversary of the 1974 Turkish invasion.

“Turkey says that seizure of property, the violation of human rights, the settlements, and the presence of Turkish troops, are all supposedly because our compatriots feel unsafe,” he said.

The President added that Ankara is ‘voluntarily’ ignoring the fact that the Greek Cypriot community accepted the bizonal bicommunal federation with political equality, following a difficult compromise.

Regarding the Cyprus talks, the President said he is ‘sorry’ for this pretext Turkey is using, as it is in complete opposition to what was agreed during talks, namely that the security of one community could not come at the expense of the other.

“A member state of the UN and a full member of the EU cannot be considered independent and sovereign if it is subject to anachronistic guarantees and intervention rights of any third country.”

He said the UN also accepts this stance, as set out by organisation’s secretary general.

“We proposed an overall security architecture that would replace the anachronism and the strategic aspirations of third countries in Cyprus,” he added.

Responding to Turkish Cypriot leader Mustafa Akinci’s comment that the Greek Cypriot community continues to see itself as the ‘only landlord’ of Cyprus, the president said: “Our respect towards our Turkish Cypriot compatriots is a fact and we prove it through the acceptance of political equality, and also their full participation in the governance of the country.”

However, Anastasiades said the Greek Cypriot side could not accept provisions that would equate to a numerical equality in governance or create a state where one community, ‘and in fact the lesser population-wise’, would enjoy benefits that would make the solution non-viable and dysfunctional.

“A state, which instead of creating the conditions for peaceful coexistence, would be stillborn through the constant impasses that would be caused by the constitutional provisions that are not prevalent in any federal member state of the UN and the EU,” he said.

The president added that he has reiterated the Greek Cypriot side’s will to restart talks to the international community, the EU, and the UN.

Anastasiades said he hoped UN envoy Jane Holl Lute’s meetings on July 23 would allow the UN secretary-general to start a new round of talks.

He added that he hoped the Turkish Cypriots and Turkey would meet the new perspective positively, and take into account all the parameters the secretary-general set during Crans-Montana and not just some of them.

“In closing, I would like to emphasise that despite the differences between us, we share the same principles and values but, above all, the common will to end the occupation and create prosperity for future generations, and, I repeat, in security and stability. This is the most important.”

Cypriots woke up Friday to the sound of sirens at 5.30am, the time the Turkish invasion was launched and its troops landed on the island`s northern shores.

On Friday morning, a memorial service for army officers and soldiers killed during the invasion took place at the Makedonitissa Tomb in Nicosia, presided over by Anastasiades. The Greek Defence Minister Panos Kammenos also attended with his Cypriot counterpart Savvas Angelides, representatives of the Church and political leaders. This was followed by the ceremony for the Noratlas plane, and the main church service at Phaneromeni in Old Nicosia.

A series of other anti-occupation events took place throughout the day in all district. Political parties and various associations and organised groups have issued statements, condemning the Turkish invasion and the continuing occupation and reiterating their determination to fight for a just and viable solution.

In a message, Greek Foreign Minister Nicos Kotzias said the key to a functional and viable solution to the Cyprus problem was to make the reunited state of Cyprus a normal modern state for the benefit of the entire Cypriot people “a state with full sovereignty, complete independence and territorial integrity, free from foreign occupying troops, foreign dependencies and unilateral third-country intervention”

Kotzias hoped that the recent appointment of a UN envoy would create new momentum in the talks.

Greece would remain a supporter of the Cypriot people, he added.

Our View: Diplomatic dispute between Greece and Russia looks set to continue