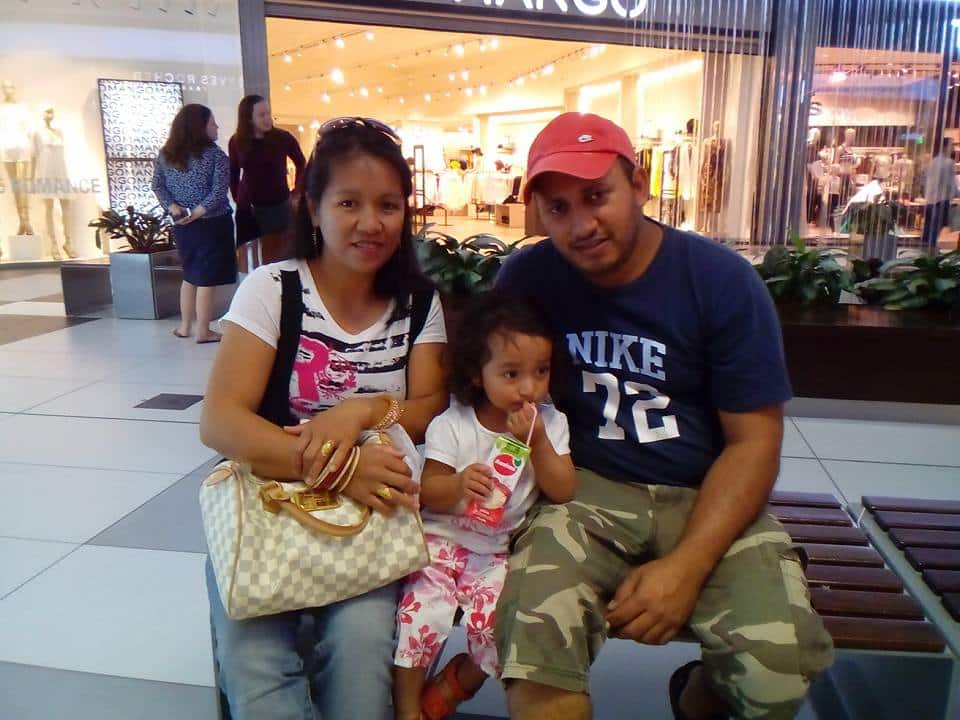 The lawyer of the father of a baby who had a life-saving operation in Israel in 2013 after the minister of health stepped in, is appealing his arrest to the supreme court and the ombudswoman, requesting that the government allow the family to stay in Cyprus on humanitarian grounds.

John (Sanjeev) Dhull, 36, from India was arrested in Paphos on Wednesday morning when he visited immigration at their request to collect a letter. On July 20, his 36th birthday, he was moved to Menoyia Immigration Detention Centre in Larnaca.

Speaking from the facility, Dhull told the Cyprus Mail that he has been shocked by his arrest and is missing his family.

“I would really like to be allowed to go home and take care of my family,” he said.

In Paphos, despite being pressed, he refused to sign papers allowing the state to deport him, said his distraught wife, Virginia Tuguinay.

Nicosia-based lawyer, Maria Serghi Mirbagheri was only engaged by the couple last week, as they had been unable to contact their previous lawyer for some time.

An email from the ministry of the Interior to the Cyprus Mail on Friday lists the couple’s immigration history and notes that they both remained in Cyprus illegally after their visas had run out – before Zoe was born – and noted that Dhull was given a ‘final residence permit’ which expired on 3/10/17. The ministry said this ‘cancels out any requests filed by him, his wife or daughter’, despite him having a work permit valid until October 2018.

However, Dhull’s lawyer said she is not disputing the point that their visas had run out a number of years ago and noted that subsequent permissions to stay had been granted on humanitarian grounds.

“We are asking the government and Leda Koursoumba, to put the family unit first on humanitarian grounds by granting Sanjeev an extension. The welfare of the child must come first and the emotional stress and removing the child from a familiar doctor and environment may have a negative effect on Zoe,” Mirbagheri said.

However, regarding the previous attempt to secure an extension to Dhull’s visa, the ministry said in its email that the “demand of the aliens cannot be approved as, according to the medial report, the child’s health problem was no longer/has been restored. They were asked to immediately leave the Republic but did not do so.”

Mirbagheri disagrees and said that the doctors report is the same as in previous years, stating that Zoe must attend check-ups at Makarios Hospital every six months and may need a second operation at the age of 16, in Israel.

“Not everything in law is black and white, circumstances are also important and we request to take a humane approach. By removing her father unexpectedly from the home and making the family leave Cyprus, who knows what complications could happen,” she said.

Mirbagheri added that although Dhull was given a letter by immigration to leave Cyprus, it also includes the right to appeal the decision, which is what he is doing.

“How can you have the right to appeal at court and also be deported at the same time, this doesn’t make sense,” she said.

Zoe, now 5, was born in Paphos general hospital on June 25, 2013 and the family planned to leave Cyprus shortly after her birth. However, she was diagnosed with a heart defect which had gone undetected during pregnancy.

Zoe was rushed to the Makarios Hospital and her parents had less than two weeks to raise the €15,000 needed to pay for a vital cardiac catheterisation in Israel as the operation could not be done in Cyprus.

They had no private medical insurance and were unable to obtain a state medical card as their visas had expired. The health ministry stepped in and offered to pay the costs, and at just three weeks old Zoe underwent the life-saving operation at the Schneider Children’s Medical Centre in Israel. The family said they were extremely grateful for this act.

“ Zoe is constantly asking where her father is and she is missing him terribly, so am I. I am asking the Cyprus Government to please help us,” said Tuguinay.

Our View: Diplomatic dispute between Greece and Russia looks set to continue

Neophytou and Christodoulides part of the problem, not the solution, Akel says