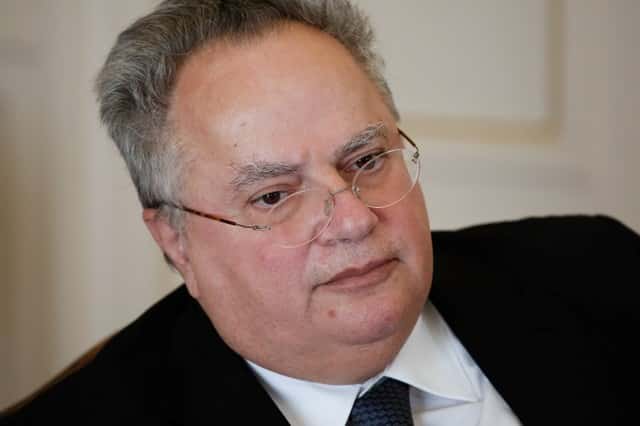 The Greek and the Greek Cypriot side can head towards any new round of negotiations under better conditions than those prepared by the previous UN envoy Espen Barth Eide, Greek Foreign Minister Nicos Kotzias said on Saturday.

“We are heading [to negotiations] with the proposals of the very serious UN Secretary General, as he expressed at the end of the talks in Crans-Montana,” the Greek FM said in an interview with the Greek newspaper, Efimerida ton Sintakton.

He added that the Greek and Greek Cypriot side would head into any new round of talks on the understanding that the existing conditions on security and guarantees cannot be maintained.

Kotzias also told the newspaper that the solution to the Cyprus issue based on the UN resolutions, and the removal of Turkish troops is a core prerequisite to the peaceful development of relations between Athens and Ankara.

Asked about the energy role of Greece in the Eastern Mediterranean, the Greek foreign minister said that issues can be better dealt with through the closer cooperation of Cyprus and Greece and other partners in the area.

“We will seek to have better relations with Turkey, but that is not only dependent on us. We will take part in stopping crises developing and wars in the Middle East and the Eastern Mediterranean,” he said.

On Thursday it was reported that Kotzias is due to release a book about the Cyprus problem from 2015 to 2018, a period which, the minister says, changed the issue.

Kotzias also includes among other things, unpublished letters he had sent to Eide, reports said.

According to the Greek website news24/7, the book will also include a letter from Kotzias to the UN Secretary-General shortly before the Conference on Cyprus in Crans-Montana, last summer, which was not sent, and also a text rejected by Turkey on the abolition of the guarantee system and a new friendship and security pact under a solution. The book will be published in Greek and English.

In it, Kotzias indirectly implies that some journalists in Greece and Cyprus who had connections with Eide, were traitors, controversially referring to them as “Ephialtes”. The word refers to the man bearing the same name, who, according to Greek historian Herodotus, betrayed his homeland by showing the Persian troops a path around the allied Greek position at the pass of Thermopylae, which helped them win the Battle of Thermopylae in 480 BC.

Today, the word ‘ephialtes’, which also means ‘nightmare’, is used to characterise someone who has betrayed their country or social group.

In the prologue of the book, published by Greek website news24/7, Kotzias makes extensive reference to Eide: “In the negotiations on the Cyprus issue, especially at the two international conferences, a special problem emerged: unlike the UN Secretary-General, his personal envoy […] had not helped in their good preparation, but he also did not understand the importance and the weight for the solution of the Cyprus issue, the question of the guarantees and the military occupation of Cyprus.”

In the process, Kotzias said, “he {Eide] did unprecedented things”, such as forging connections with journalists in Cyprus and even more so in Greece to create an opposition front to the two governments, something he did not even try to do in Turkey.

“On the one hand, because the Ankara regime would not allow it, on the other, because Greece, and Hellenism in general, has a tradition in ephialtes.”