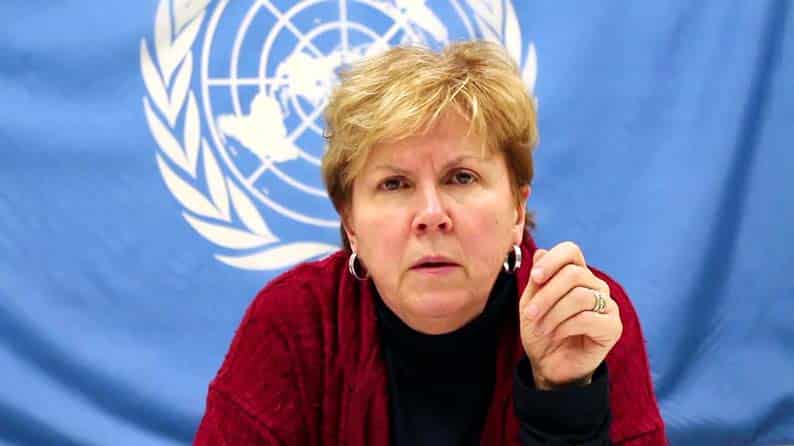 UN envoy, Jane Holl Lute, is due to hold meetings in Greece, Turkey, the UK and the EU after her meetings on Monday with President Nicos Anastasiades and Turkish Cypriot leader Mustafa Akinci, Foreign Minister Nicos Christodoulides said on Saturday.

“We have one wish and goal, and that is that through these meetings, with all the involved members, the conditions will arise that will allow us to continue negotiations from where they left off in Crans- Montana,” Christodoulides said on the sidelines of the International Batroun Festival in Larnaca.

Asked to comment on statements from Turkey, he said they have not been helpful.

“But we are focused on the essence, and the essence is that Ms Lute is coming, and the meetings are starting on Monday with the President of the Republic, and through meetings Ms Lute will have with Britain, Greece, Turkey and the EU, our wish and goal is she hears approaches that will allow for the restart of talks.”

The foreign minister also noted that the fact Lute is coming for these meeting shows the personal interest of the UN secretary-general.

Lute is set to meet with Anastasiades in the morning and with Akinci in the afternoon.

In the meantime, in an interview with Greek newspaper, Ta Nea, President Anastasiades said that he is ready to restart talks.

“We are ready, and I will reiterate to Ms Lute, what I have told Mr Guterres many times. We want the continuation of negotiations,” he said.

Anastasiades added that he wants talks to restart from the point they left off and within the ‘Guterres Framework’.

“I believe that the Greek Cypriots and the Turkish Cypriots can find ways and methods to understand each other. Turkey just has to let go of the idea that it can control and align Cyprus with its own interests and goals.”

The president said that during the Conference on Cyprus in Crans-Montana, the two sides had come ‘very close’ to achieving a solution due to the fact that in negotiations prior to the conference, important convergences were achieved.

“Unfortunately, the Turkish side was not ready to let go of the control it believes it should have in Cyprus, be it through guarantees, or military presence,” he said. “They wanted to have a permanent military base in Cyprus.”

Anastasiades said that the Greek Cypriot side was the only side to submit written proposals within the UN secretary-general’s framework.

Asked about the Republic of Cyprus’ ‘red lines’, the president said: “It is inherent that the possibility of repeating the invasion must be avoided.”

The president also said that after 2004, the international climate for Cyprus was difficult, as the results of the referendum could not be understood by some. However, he added that the mood towards the Republic of Cyprus changed over time, following the referendum on the Annan Plan, where the Greek Cypriots voted ‘no’ to the solution.

Anastasiades said that the climate had improved, due to the active role of Cyprus in the EU, and the role the island could play as a European pillar of stability and security in the area.

Turkish foreign minister, Mevlut Cavusoglu, is also set to arrive in the north on July 23, the same day Lute will meet with the two leaders.

Cavusoglu is due to arrive after Lute’s visit, Turkish news agency Dogan reported. The minister is set to meet with Akinci and the Turkish Cypriot political parties.

Spain’s conservatives swing to the right as new leader chosen