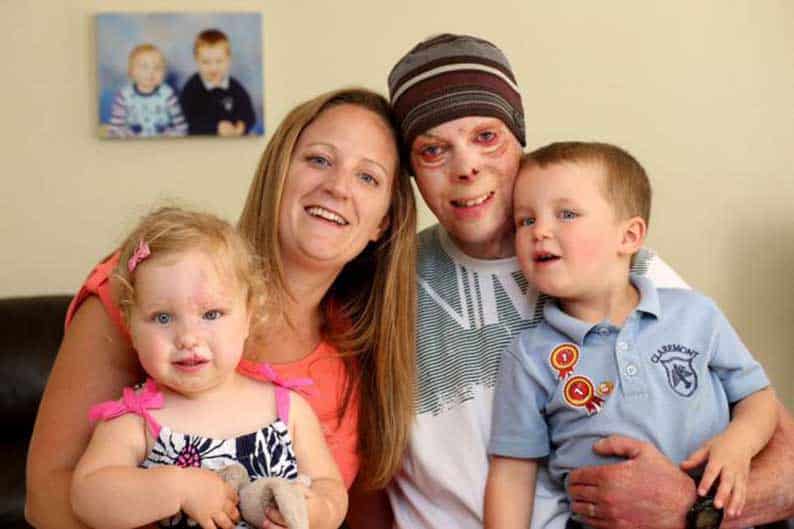 Martyn Compton pictured with his family. He suffered 75 per cent third-degree burns all over his body while serving in Afghanistan (Press People)

A non-profit organisation offering donated holiday homes to injured or traumatised military personnel is short of properties this year, due to the increase in tourists holidaying in Paphos.

The Military and Retired Cyprus Holidays for Heroes (March) is in desperate need of properties this year, in particular a three-bedroom villa with a pool and a suitable three-bedroom property for a wheelchair user, said Alan Wilson, a March representative.

“We urgently need a villa for Martyn Compton and his family. He has severe burns and PTSD (post-traumatic stress disorder) and will come to Cyprus on August 18 for two weeks. Because of the influx of tourists, the suitable properties that are usually donated to us have all been rented out,” he said.

Compton, who suffered 75 per cent third-degree burns all over his body while serving in Afghanistan, has visited Paphos before and served in the Household Cavalry for 14 years.

In 2006, on his first tour of Afghanistan, his armoured vehicle was blown up by the Taliban, killing three of the crew. As the only remaining crew member, Compton was shot at with rocket propelled grenades which blew up the engine block and engulfed him in flames.

He managed to crawl out, whilst on fire and was shot twice. He was in a coma for three months and has since undergone more than 500 hours of operations and years of rehabilitation.

Compton has since joined ‘Team Brit’ a motor racing team of disabled drivers with an aim of competing in Le Mans by 2020.

“He needs these breaks, as does his family and it means so much to be able to help them and others like him. They can come with their families and relax in the sunshine, we would be really grateful for any properties we can use,” he said.

March operate holidays for injured or traumatised military serving or non-serving personnel with all types of injuries including: tetraplegics, paraplegics, the blind, burns’ victims and amputees, and also those suffering from post-traumatic stress disorder.

Homeowners donate their properties for free for one or two weeks. The non-profit organisation pays for it to be cleaned, and has a welcome package placed at the property.

All used items are laundered and put back in place, and the house is thoroughly cleaned once the individual or family leaves.

Wilson said they are also desperate for a suitable property that is equipped for a disabled person and large enough to also house his family, at the end of August for two weeks. The personnel is an ex-major who was injured in an explosion in Afghanistan and lost the use of his legs, he said.

“He is wheelchair bound and has no movement below the waist. We need a property so that along with his family, he can have a well-deserved break.”