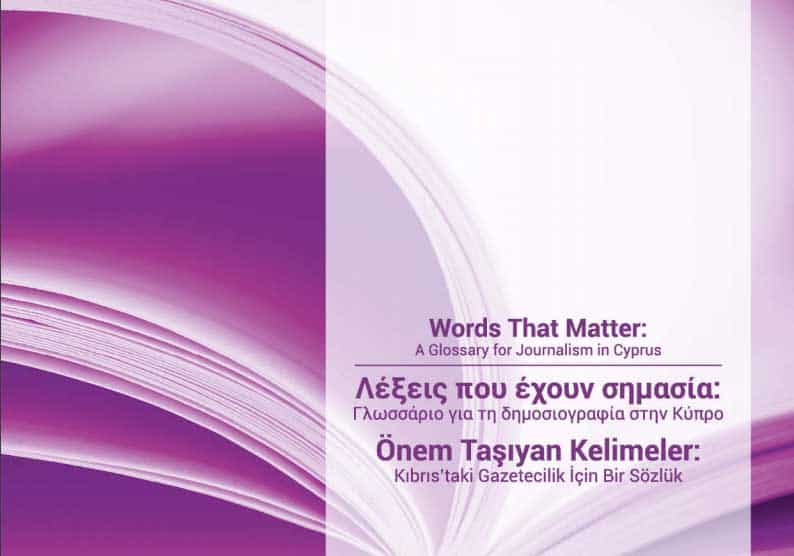 The ‘Initiative for Freedom of Expression’ called on Saturday for the board of the Journalists Union to officially reject a glossary proposed by the OSCE which suggested Cyprus problem-related terminology which could be deemed mutually acceptable to both sides.

The glossary, which was presented last week, called ‘Words that matter: a glossary for journalism in Cyprus’ was a joint undertaking between two Greek Cypriot and two Turkish Cypriot journalists – Maria Siakalli, Christos Christofides, Esra Aygin and Bekir Azgin.

Under the wing of the organisation for security and co-operation in Europe (OSCE), the glossary had already hit the wrong nerve in some quarters of the media before it was even published with some journalists referring to it is a restriction on freedom of the press.

“We were extremely disappointed by the announcement of the Cyprus Journalists’ Union board, in which they distance themselves from the ‘glossary’ – that caused an uproar in Cypriot society – but did not reject it,” the initiative said in a statement on Saturday.

On Tuesday, the union had released a statement saying that they ‘in no way adopt’ the complete contents of the OSCE’s glossary.

The statement added that the editors and inspirers of the glossary had good intentions, but that the final result did not ‘justify those intentions’.

However, the initiative said that the union ‘continues to think it is a useful tool and has ignored the appeal of over 170 journalists’.

In June, a group of journalists signed a petition, condemning the glossary which offered journalists more neutral options when writing about the Cyprus problem.

“We consider even discussing this idea to be dangerous as it centres on a philosophy which turns journalists into a spineless means of transmitting information,” the letter the journalists sent to the union said.

The initiative said that the board of the union should file a complaint about the OSCE, to the European Federation and the International Union of Journalists.

“These actions will obligate the OSCE to withdraw the ‘glossary’, thus losing the right given to them by the Cyprus Journalists’ Union, to use it as an official document, following the purported agreement and acceptance of Cypriot journalists,” the initiative said.

The initiative added that the union stands to ‘lose the confidence’ of journalists, if they do not take the proper actions against the OSCE.

During the glossary’s presentation, OSCE representative for freedom of the media Harlem Desir said the words used to describe the world are often a reflection of positions, and that the power of words could be used to start a war or bring peace.

The glossary seeks to “open up a debate about how journalism can be an inspiration for mutual understanding,” he added.

“While journalists are not in charge of negotiations on the future of the island, their approach, the way they report on the situation and even the choice of words they use can have a direct effect on perception and public opinion.”

Desir stressed in his speech that the glossary is only optional, saying it does not impose anything on journalists, but serves as a platform for discussion in a newsroom.

The glossary contains a total of 56 terms considered to be offensive by either of the two sides of the divide. Most terms contain mutually acceptable alternatives while for others such as ‘pseudo state’ there was no agreed alternative.

Germany and the Netherlands contributed to the funds required to creating the glossary.

The German embassy posted on its Facebook page that “Germany is proud to be one of the main sponsors of this meaningful project that is contributing to the rapprochement of the Turkish and Greek Cypriots”.

Berlin is reported to have contributed €25,000 for the glossary.

The glossary can be found online at https://www.osce.org/representative-on-freedom-of-media/cyprus-dialogue

Behind every great man, there is a woman willing to sacrifice it all