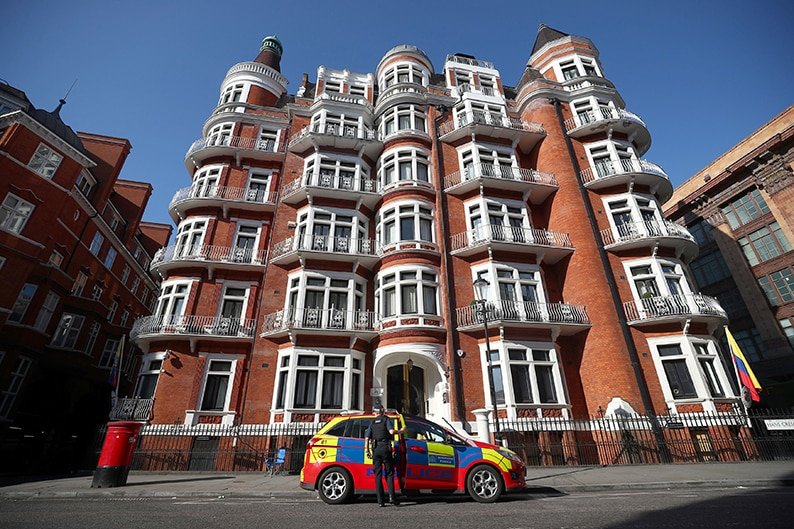 A police officer parks their car outside the Ecuadorian embassy, where Julian Assange remains inside, in central London

The diplomatic impasse over Julian Assange’s six-year stay in Ecuador’s London embassy is coming to a head, a source close to the WikiLeaks founder said on Monday, after media reports the South American country would rescind his political asylum.

Assange has been living in Ecuador’s London embassy since June 2012 when he successfully sought asylum to avoid extradition to Sweden to face questioning about allegations of sex crimes which he has always denied.

Those allegations have since been dropped but Assange would be arrested by British police should he leave the embassy for breaching bail conditions.

He believes that would pave the way for extradition to the United States for the publication of a huge cache of US diplomatic and military secrets on the WikiLeaks website.

Speculation about the Australian-born Assange’s future has grown this month after the Sunday Times newspaper said senior officials from Ecuador and Britain were now in discussions about how to remove him from the embassy after revocation of his asylum.

“The situation is very serious. Things are coming to a head,” the source, who spoke on condition on anonymity, told Reuters. He said the latest information from inside the embassy was, “It’s not looking good”.

However, both the Ecuadorean government and British government sources played down suggestions that there was likely to be any imminent movement to break the stalemate.

Ecuadorean President Lenin Moreno, who has described Assange’s situation as “unsustainable” and “a stone in his shoe”, is in to London this week to attend a global disabilities summit when newspapers suggested he could finalise an agreement.

However, the Ecuadorean government has said neither Moreno nor his delegation would address the Assange issue on his visit.

“The Ecuadorian state will only talk and promote understandings about Mr Assange’s asylum, within the framework of international law, with the interested party’s lawyers and with the British government,” Ecuador’s foreign ministry said in a statement ahead of the visit.

SOLUTION ‘NOT IN SIGHT’

“At the moment, due to the complexity of the topic, a short- or long-term solution is not in sight.”

A British government source also said there was no sign of immediate progress. Last month, Foreign Office minister Alan Duncan told parliament that they were increasingly concerned about Assange’s health.

“It is our wish that this is brought to an end, and we would like to make the assurance that if he were to step out of the embassy, he would be treated humanely and properly,” Duncan said. “The first priority would be to look after his health, which we think is deteriorating.”

In May, Moreno ordered the withdrawal of additional security from Ecuador’s small diplomatic headquarters in London. That followed a decision in March to suspend Assange’s communication system and direct voice to the outside world.

Assange’s supporters regard him as a champion of free speech who has exposed government abuses of power at great personal cost. His critics seem him as a criminal who recklessly endangered lives in many countries by exposing secrets.

His attempt to halt British legal proceedings failed in February when a judge said Assange appeared to consider himself above the normal rules of law.

Britain ended a permanent guard outside the embassy in October 2015 after spending almost 13 million pounds in policing but has vowed he will be arrested should he leave the embassy.

A US Department of Justice investigation into WikiLeaks is continuing but a US law official close to the investigation told Reuters there was no sealed indictment against Assange.

Assange has said the United States would unveil charges against him if he were arrested by British police and this would pave the way for his extradition.

Rising heat linked to suicide spikes in US and Mexico