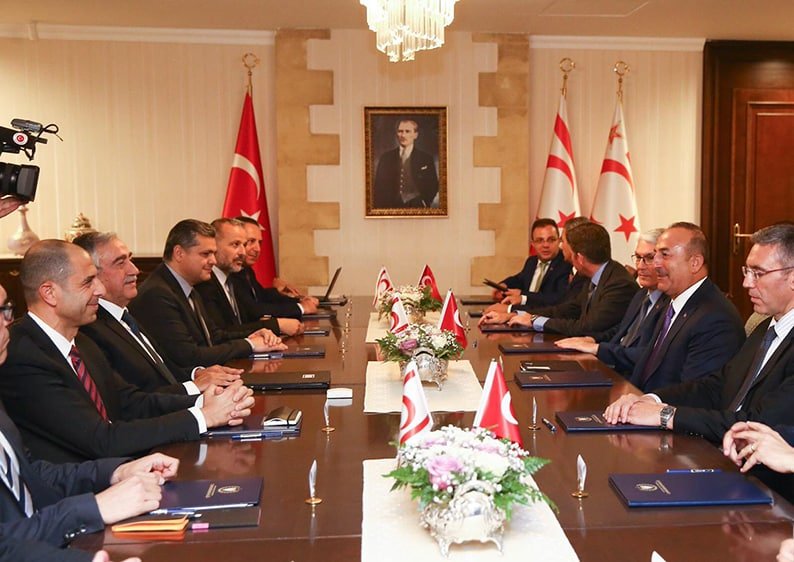 If the Greek Cypriot side starts drilling in the autumn, Turkey will also, Turkish Foreign Minister Mevlut Cavusoglu said on Tuesday.

Cavusoglu, who was in the north for a meeting with Turkish Cypriot leader Mustafa Akinci, told the Turkish Aksam news outlet that where Cyprus was concerned, the process could not bear another failure.

“We have a platform and we will start drilling. If they start in the fall, we will also begin,” he said referring to plans by ExxonMobil to drill in block 10 of Cyprus’ EEZ in the autumn.

Cavusoglu said Turkey had blockaded Italian giants ENI in block 3 last February. “For the last three years we have been telling the Italians and ENI ‘do not enter here, we will not allow it unless the rights of the Turkish side are guaranteed.’ So if the Greek Cypriot side takes unilateral steps, we will start drilling this time,” he added.

He also said that Turkey had agreed with Greece and Britain as the three guarantor powers as far as what they would discuss and the context prior to the talks in Crans-Montana last year which failed to reach a deal. “If we rush to negotiate and fail again, negotiations may not be reopened again. The process cannot bear another failure,” he said.

He later tweeted: “At our meeting with President Akıncı of #TRNC we shared our views concerning the establishment of a just, viable and realistic settlement that will also guarantee the future and the security of Turkish Cypriots.”

Speaking at a joint news conference after the meeting, Akinci said that the visit on Monday by Lute to assess prospects for talks, should not be seen as a resumption of negotiations. He said she had come to assess the situation and was a very good listener.

“This should not be interpreted that it means the resumption of the Cyprus negotiations. It is a visit in order to test the waters in the light of an evaluation by the UN Secretary-General,” he stressed.

Akinci said he said he had tried to explain to the UN Secretary-General’s envoy the outlets that might exist for talks, and that the Turkish Cypriot side had always been positive in this direction.

“We, together with Turkey want peace and tranquillity in Cyprus. We want peace, cooperation and stability in the Eastern Mediterranean. We want good relations between Turkey and Greece. We wish for a fair and lasting solution to the Cyprus problem. We have always undertaken positive steps and we will not give up from doing so, as long as we get reciprocity.”

This was true especially in the matter of hydrocarbons, he said. “We have told the entire international community that from now on our attitude in this matter will be different”. “Turkish Cypriots have rights to natural gas,” he said. “They will not give them away to anyone and we will not let them seize the rights of the Turkish Cypriot people.”

He also said Turkey continued to have a constructive attitude on the Cyprus issue as they had in Crans-Montana. “Talks are now underway with the UN on how the process will move ahead and in time we expect the picture will clear.”

Cavusoglu also said the Turkish side was not being treated fairly. “Today’s embargoes and isolations are continuing. The Greek Cypriot side should give up acting as the sole owner of the island. The truth that both sides on the island are politically equal does not change and it will not change. We will continue to have the same position in the coming period,” he added.

Both Akinci and Cavusoglu also expressed their sorrow over the deaths caused by fires in Greece. The latter said he had already spoken to his Greek counterpart Nicos Kotzias and offered Turkey’s help.

“I told him we were ready to help,” he said, adding that Turkish planes and helicopters were on standby. Kotzias responded that for the moment they did not need any additional help, and were expecting rain, Cavusoglu said.

“I share the pain of the Greek people over the fires, I hope they will soon be under control, I express the Turkish Cypriots’  condolences to the Greek people,” Akinci added.

Plant of the week: Tea made from plant brings on tranquility