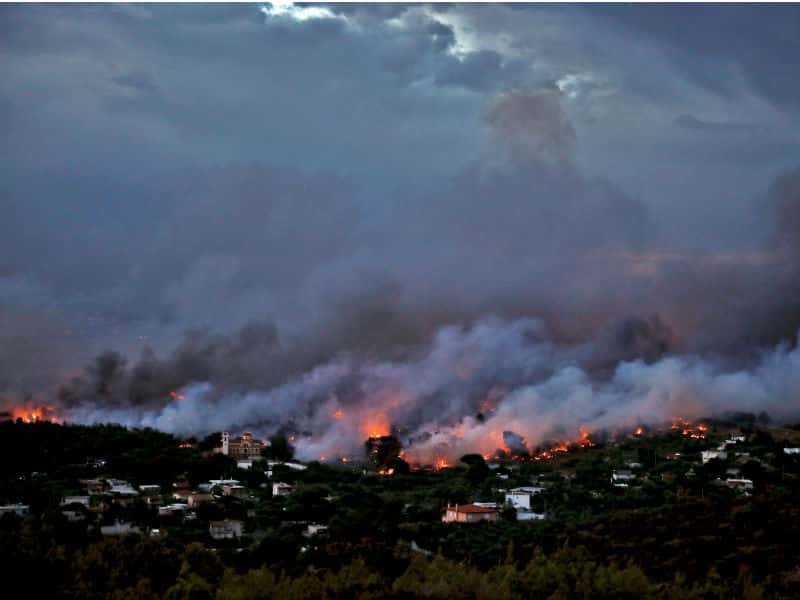 A 64-member team from Cyprus’ fire, civil defence, and ambulance services was sent to Greece on Tuesday to aid in battling wildfires that killed at least 74 people, including families with children found clasped in a last embrace as they tried to flee the flames.

“Greece is going through an unspeakable tragedy,” Greece’s Prime Minister Alexis Tsipras said as he appeared on television to declare three days of national mourning.

Cyprus’ fire Chief Marcos Trangolas said that the Cypriot team was dealing with the aftermath of the blaze in the Mati area, approximately 29 km from Athens.  Other members of the Cypriot mission were in the Kineta area.

Two fire trucks were also sent with the Cypriot mission, which was picked up in Larnaca by a Greek C130 military aircraft. The Cypriot team is set to stay in the area to ‘secure the perimeter and deal with any potential fire resurgence’, Trangolas said.

Following a conversation with the head of the island’s mission in Greece, Trangolas said he was informed: “The fire must have been spread very quickly.”

He added that the area is a pine forest, but that there is also brush growing underneath the pines, which caused some of the trees to be burnt up to their middles.

“Due to the strong winds, which were 10 to 11 on the Beaufort scale, the spreading fire’s pace was disproportionate to the pace used for the areas evacuation,” the fire chief said.

There were no Cypriot citizens among the dead and wounded, Cypriot Ambassador to Greece, Kyriakos Kenyevos, told the Cyprus News Agency.

He said the Cyprus embassy in Greece assisted ten Cypriots who asked for help. Most of them were elderly people trapped in the Mati area. The embassy intervened in order to free them and informed the Greek authorities of their whereabouts.

Cyprus fire service spokesman Andreas Kettis told CNA that a second 40-member team would be on standby in case they were needed.

“Thank you very much in Cyprus and Spain for the immediate mobilisation of teams of firefighters, rescuers, firefighting vehicles and aeroplanes to help Greece fight the devastating #fires in Attica, European solidarity in action,” Stylianides tweeted.

Emergency crews found the bodies of 26 victims, some of them children, lying close together near the top of a cliff overlooking a beach. They had ended up there after apparently searching for an escape route.

Many hours after the blaze broke out, the strong smell of charred buildings and trees lingered in the air in parts of Mati. White smoke rose from smouldering fires.

Residents, their faces blackened by smoke, wandered the streets, some searching for their burned-out cars, others for their pets.

Many in the area were unable to escape the fast pace of the blaze even though they were a few metres from the Aegean Sea or in their homes, the fire service said.

“We went into the sea because the flames were chasing us all the way to the water. It burned our backs and we dove into the water,” said Kostas Laganos, a middle-aged survivor.

Greece’s fire service said the intensity and spread of the wildfire at Mati had slowed as winds died down on Tuesday afternoon, but it was still not fully under control.

It urged residents to report missing relatives and friends. Some took to Twitter and Facebook, posting photographs of young children and elderly couples they hoped to track down.

Greece issued an urgent appeal for help to tackle fires that raged out of control in several places across the country, destroying homes and disrupting major transport links.

“Our thoughts go to Greece and the victims of the terrible fires,” French President Emmanuel Macron said in tweets published in French and Greek.

Pope Francis said in a telegram he was deeply saddened by the tragedy and prayed for the victims and their families.

“The country is going through an unspeakable tragedy,” Greek Prime Minister Alexis Tsipras said in a televised address. “Today, Greece is mourning and we are declaring three days of national mourning in the memory of those who perished,” he said.

Meanwhile, President Nicos Anastasiades had a telephone conversation Monday with President Prokopis Pavlopoulos during which he expressed his full sympathy for Greece and the Greek people.