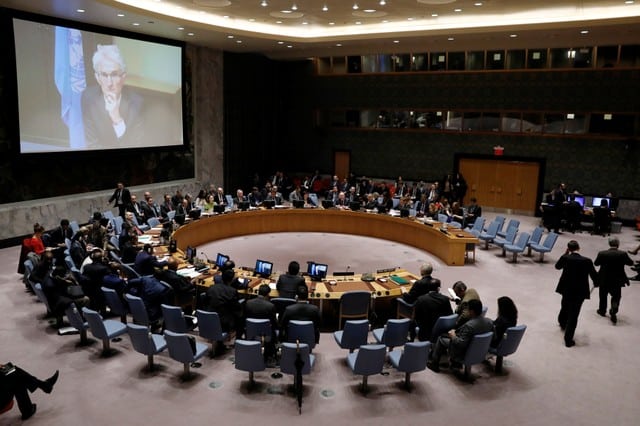 All members of the UN Security Council gave their consent on Wednesday night to a draft resolution they had agreed on earlier in the day on the renewal for another six months of the mandate of the UN Peacekeeping Force in Cyprus (Unficyp) and are expected to vote on Thursday.

According to the Cyprus News Agency (CNA), the council is to hold a formal meeting on Thursday , to vote on the resolution.

Prior to the meeting, Cyprus’ permanent representative, ambassador Kornelios Korneliou was expected to meet with the president of the Security Council, Olof Skoog, to give the consent of the Cypriot government.
Earlier reports had said that the council had not reached a conclusion on the final draft of the Unficyp’s mandate by Wednesday evening which would lead to a delay of the vote that was scheduled on Thursday morning.

During discussions on Monday and Tuesday, some amendments had been filed in line with the direction of US authorities.

Noting that the Government of Cyprus is agreed that in view of the prevailing conditions on the island it is necessary to keep the United Nations Peacekeeping Force in Cyprus (UNFICYP) beyond 31 July 2018,

Echoing the Secretary-General’s firm belief that the responsibility for finding a solution lies first and foremost with the Cypriots themselves, and reaffirming the primary role of the United Nations in assisting the parties to bring the Cyprus conflict and division of the island to a comprehensive and durable settlement,

Welcoming the commitments set out in the Greek Cypriot and Turkish Cypriot leaders’ Joint Statement of 2 April 2017 on the basis of the Joint Declaration adopted on 11 February 2014, the reconvening of the Conference on Cyprus under United Nations auspices in June 2017, further welcoming the participants’ commitment to support the process towards a comprehensive settlement in Cyprus, and the support provided by the Secretary-General and Secretary-General’s Special Representative Elizabeth Spehar,

Recalling resolution 1179 (1998) and the importance attached by the international community to all parties engaging fully, flexibly and constructively in negotiations to secure a settlement and noting that last year’s Conference on Cyprus did not result in an enduring, comprehensive and just settlement based on a bicommunal, bizonal federation with political equality, as set out in relevant Security Council resolutions, urging the sides to renew their commitment to such a settlement, and stressing that the status quo is unsustainable,

Welcoming the appointment of UN Consultant Jane Holl Lute, and urging the sides and all involved parties to demonstrate political will and to engage constructively with UN consultations,

Reaffirming the importance of continued crossings of the Green Line by Cypriots, and encouraging the opening by mutual agreement of other crossing points,

Convinced of the many important benefits, including economic benefits for all Cypriots, that would flow from a comprehensive and durable Cyprus settlement, urging the two sides and their leaders to foster positive public rhetoric, and encouraging them clearly to explain the benefits of the settlement, as well as the need for increased flexibility and compromise in order to secure it, to both communities well in advance of any referenda,

Highlighting the importance, both political and financial, of the supporting role of the international community, and in particular that of all parties concerned in taking practical steps towards helping the Greek Cypriot and Turkish Cypriot leaders to renew their commitment to a settlement under United Nations auspices; taking note of the assessment of the Secretary-General that the security situation on the island and along the Green Line remains stable, and urging all sides to avoid any action, including violations of the military status quo, which could lead to an increase in tension, undermine the progress achieved so far, or damage the goodwill on the island,

Recalling the Secretary-General’s firm belief that the situation in the buffer zone would be improved if both sides accept and actively assist UNFICYP in the implementation of the aide-memoire in use by the United Nations,

Noting with regret that the sides are withholding access to the remaining minefields in the buffer zone, and that demining in Cyprus must continue, noting the continued danger posed by mines in Cyprus, noting also proposals and discussions as well as positive initiatives on demining, and urging rapid agreement on facilitating the recommencement of demining operations and clearance of the remaining minefields,

Commending the work of the Committee on Missing Persons, highlighting the importance of intensifying its activities, and therefore the need to provide all information required as expressed in the press release of the Committee on Missing Persons on 28 July 2016 regarding review of archival materials, noting that the remains of 1,132 missing persons, from a total of 2002, have not yet been positively identified, urging the opening up of access to all areas expeditiously to allow the Committee to carry out its work, and trusting that this process will promote reconciliation between the communities,

Agreeing that the active participation and leadership of women is essential to the political process and can contribute to making any future settlement sustainable, recalling that women play a critically important role in peace processes as recognised in United Nations Security Council Resolution 1325, and related resolutions; recalling Resolution 2242 (2015) and its aspiration to increase the number of women in military and police contingents of United Nations peacekeeping missions; and further recalling the importance of the active participation of youth, consistent with Resolution 2250,

Urging the sides to step up their efforts to promote intercommunal contacts, reconciliation and the active engagement of civil society, including Bi-Communal Initiatives and development projects where the two communities can work together and jointly benefit, and the encouragement of cooperation between economic and commercial bodies and to remove all obstacles to such contacts, while also noting various initiatives to bring together particular sectors or actors on both sides for dialogue, including the Religious Track of the Cyprus Peace Process,

Stressing the need for the Council to pursue a rigorous, strategic approach to peacekeeping deployments,

Recalling resolution 2378 (2017) which requests the Secretary-General to ensure that data related to the effectiveness of peacekeeping operations, including performance data, is used to improve analytics and evaluation of mission operations, based on clear and well identified benchmarks, and emphasising the need to regularly review all peacekeeping operations including UNFICYP to ensure efficiency and effectiveness,

Noting the importance of transition planning in relation to the settlement, including the need to consider adjustments as appropriate to the mandate of UNFICYP, force levels and other resources and concept of operations, taking into account developments on the ground and the views of the parties,

Noting with appreciation the efforts of the Secretary-General and Special Representative Elizabeth Spehar,

Welcoming and encouraging efforts by the United Nations to sensitise peacekeeping personnel in the prevention and control of HIV/AIDS and other communicable diseases in all its peacekeeping operations,

(a)Put their efforts behind further work on reaching convergences on the core issues;

(b) Intensify work with the Technical Committees with the objective of enhancing intercommunal contacts and improving the daily lives of the Cypriots;

(c) Improve the public atmosphere for negotiation to secure a settlement, including by focusing public messages on convergences and the way ahead, and delivering more constructive and harmonised messages; and by refraining from rhetoric that could make a successful process more difficult to achieve; and

9.Further stresses the importance of the full and effective participation of youth; recognizes the important work of the Bi-Communal Technical Committee on Education and calls on both sides to facilitate intercommunal youth contacts;

18 Decides to remain seized of the matter.”

Greece’s deadly fire: a ‘blowtorch’ no one could stop