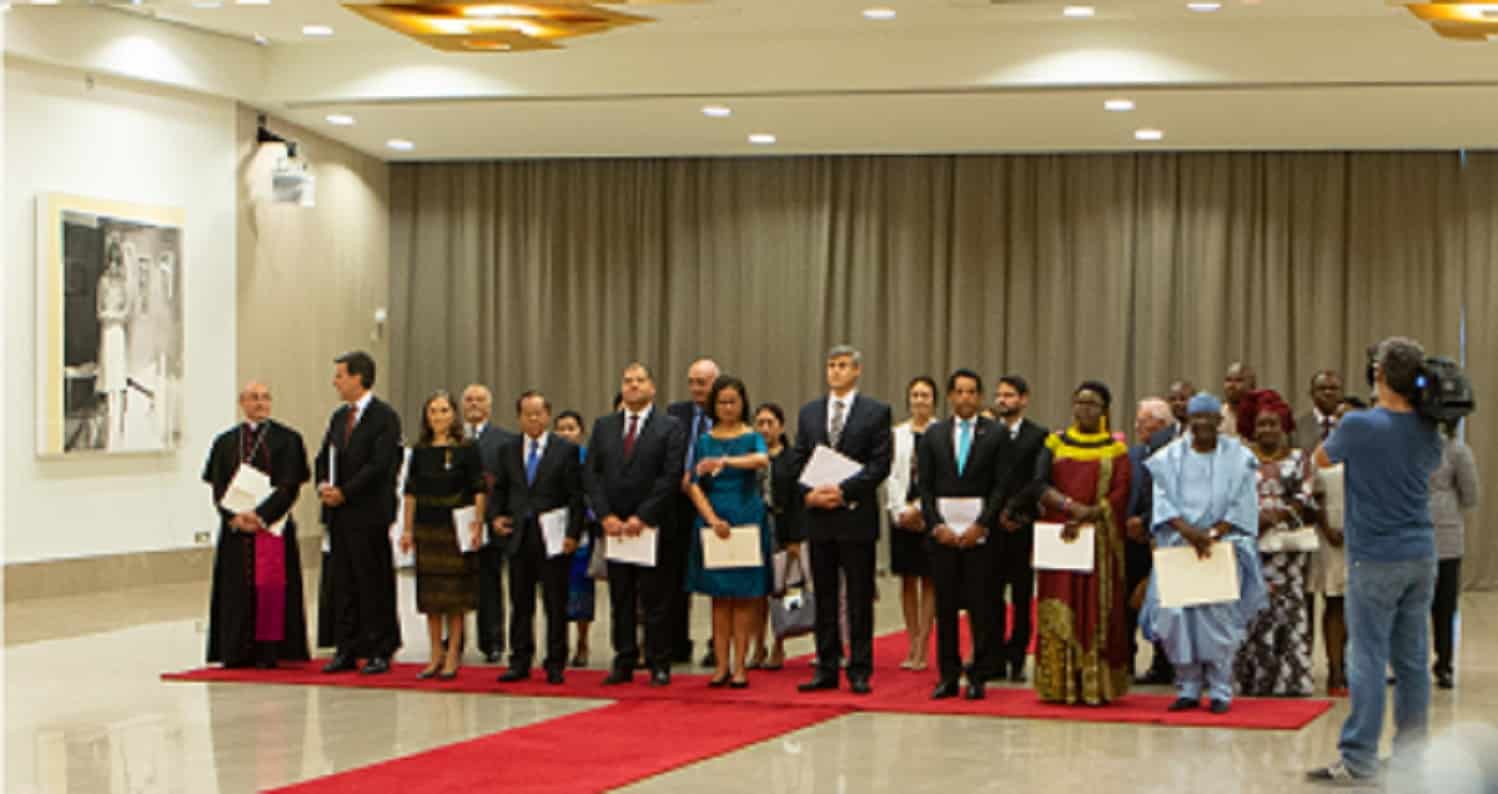 Cooperation in hydrocarbons development can have a positive effect in the political relations between the Eastern Mediterranean countries, building the foundations for regional peace, President Nicos Anastasiades said on Thursday.

He was addressing the new ambassadors of Switzerland, Portugal, the Holy See, Laos, Latvia, Ecuador, Moldova, Dominican Republic, Uganda and Nigeria to Cyprus, who presented their credentials in a ceremony at the Presidential Palace.

The president assured them that the government and he personally, would provide every assistance and support in the performance of their duties and in further advancing the relationship between the Republic of Cyprus and their respective countries.

He also offered his condolences to the Ambassador of Laos, Kham-Inh Khitchadeth, on “the catastrophic dam collapse in Southern Laos.”

Anastasiades said that the geopolitical role that a country could take was closely linked to its foreign policy orientations and objectives, including the ways and means of implementing them.

The main goal of his government, he said, had been the adoption of a comprehensive and outreaching foreign policy, aimed at “first and foremost, reaching a solution to the Cyprus problem, which would prove of immense benefit not only to Cypriots but also to regional stability.”

Another goal was safeguarding the exploration for and exploitation of Cyprus’ natural wealth and taking advantage of the internal and regional economic and political benefits that would arise, he said.

Cyprus aimed at contributing actively to building and promoting peace and security in the Eastern Mediterranean, “while at the same time deepening our bilateral relations with neighbouring countries of the region, so as to create a grid of alliances in support of our foreign policies and economic goals,” he said.

Anastasiades said that Cyprus wanted to step its involvement in all EU bodies, including becoming an integral part of the European Security System, and establishing a credible presence among EU member states.

As regards energy, he said that “it is our strong belief that the discovery of hydrocarbon reserves in the Eastern Mediterranean, including within Cyprus’ Exclusive Economic Zone, can serve as a catalyst for a broader cooperation on a regional level.”

He believed that cooperation in hydrocarbons development could have a positive effect in the political relations between the Eastern Mediterranean countries, building the foundations for regional peace.

“Over the past years, we have progressed remarkably towards the realisation of our exploration programme and despite the threats or aggressive acts we have encountered, we aspire to consolidate Cyprus as a natural gas producer and a transit country,” Anastasiades said.

During the past few years, he said, Cyprus has succeeded in “turning an economy in distress into a story of strong economic recovery that gained international praise.”

He added that a solution to the long-lasting Cyprus problem and the normalisation of relations with Turkey would bring significant multiple benefits as regards peace and stability in the region.

“My top priority remains none other than addressing the unacceptable current state of affairs with the continuing Turkish occupation of 37 per cent of the territory of the Republic of Cyprus,” he said. “There is no doubt that lasting peace and stability can only be achieved through the comprehensive settlement of the Cyprus Problem.”

Within this context, he said, “I do hope that the meetings of the special envoy of the United Nations which will soon take place with all other interested parties and stakeholders involved will allow the Secretary-General to be in a position to resume negotiations.”

Anastasiades also expressed hope that “both our Turkish Cypriots compatriots and Turkey will respond positively to the new prospects before us.”

Beyonce has shared a rare photo of her twins with fans