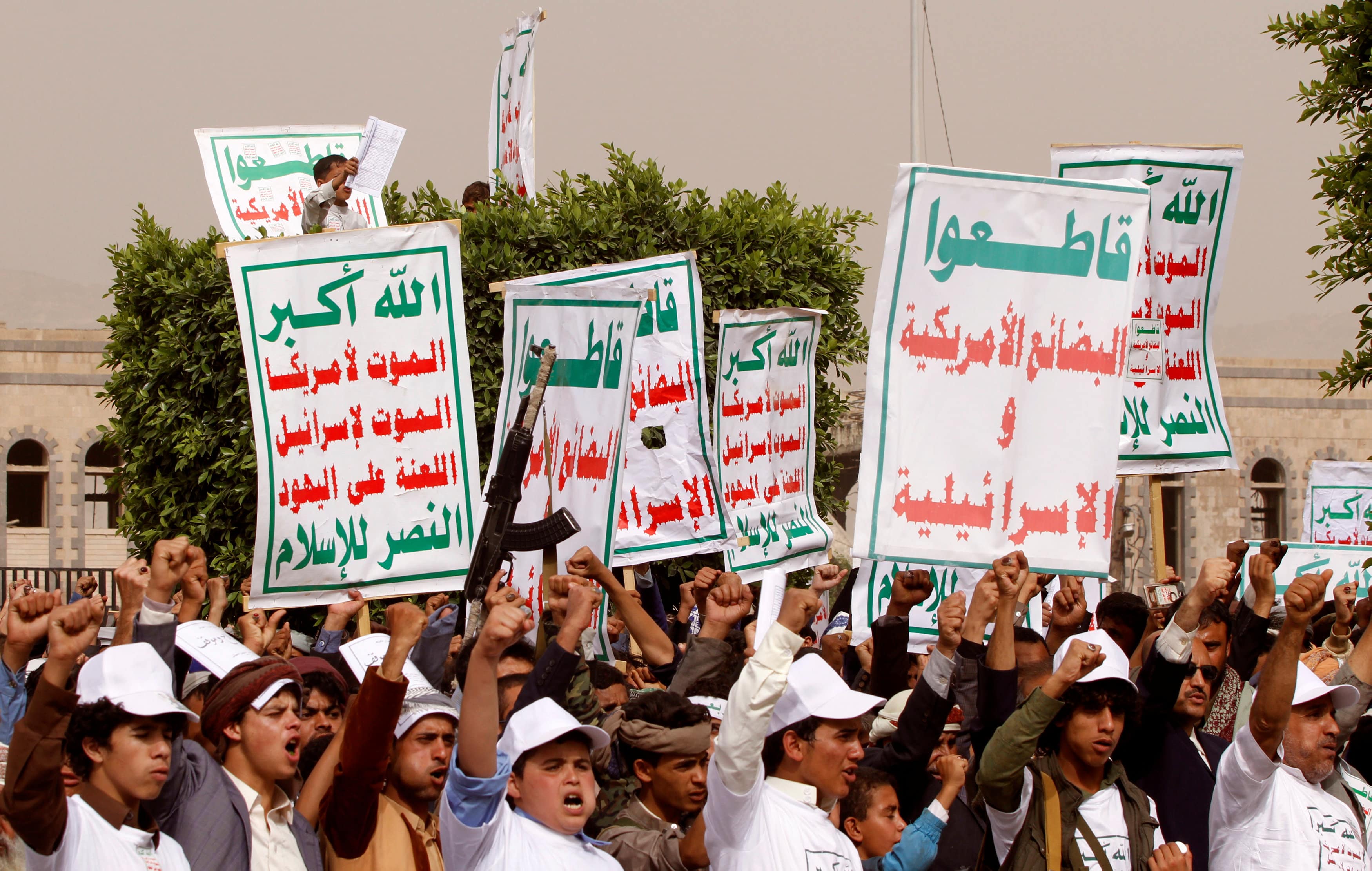 Houthi supporters rally to mark the anniversary of launching their motto (Sarkha), in which they call for the "Death of America and Israel", in Sanaa, Yemen

Saudi Arabia said on Thursday it was suspending oil shipments through a strategic Red Sea lane after Yemen’s Iran-aligned Houthis attacked two tankers in the waterway, underscoring the risk of an escalation in tensions in the region.

Saudi Arabia and arch-foe Iran have been locked in a three-year proxy war in Yemen, which lies on one side of the Bab al-Mandeb strait at the southern mouth of the sea, one of the most important trade routes for oil tankers heading from the Middle East to Europe.

The chairman of the Kuwait Oil Tanker Company said the country was studying whether to follow suit.

The powerful commander of Iran’s Revolutionary Guards Quds force, Qassem Soleimani, criticised the US role in the Red Sea.

“The Red Sea, which was secure, is no longer secure with the American presence … (US President Donald) Trump should know that we are nation of martyrdom and that we await him,” Soleimani was quoted as saying on Thursday.

Industry and shipping sources said the suspension was unlikely to impact Saudi crude supplies to Asia, but could add shipping costs to Saudi vessels heading to Europe and the United States due to a longer transit.

Traders said the suspension order was only for Saudi-owned vessels, so state-owned Saudi Aramco could still charter foreign ships to move its crude.

Saudi Arabia also has a pipeline route to the city of Yanbu on the Red Sea keeping Europe and North America well supplied — the 5-million-bpd Petroline.

The world’s largest oil exporter has kept its crude shipments flowing during previous regional conflicts, including the 1980-1988 Iran-Iraq war when the two sides sought to disrupt each other’s oil exports in what was known as the Tanker War.

The OPEC heavyweight, an important U.S. ally, has led a pact among oil producers to boost output to cool the market after Trump imposed sanctions on Iran and criticised OPEC for high prices.

Saudi state media reported shortly after Falih’s announcement that the kingdom’s Crown Prince Mohammed bin Salman chaired a meeting of the Political and Security Affairs Council but did not mention what topics were discussed.

Saudi Arabia leads a coalition of Sunni Muslim Arab states which intervened in Yemen’s war in 2015 to restore the internationally recognised government in exile and thwart what Riyadh sees as Tehran’s expansionist ambitions in the region.

Saudi Arabia and the United Arab Emirates strongly backed Trump’s decision to quit a nuclear deal with Iran. They accuse Iran of supplying the Houthis with weapons, including missiles, which the group and Tehran deny.

The latest attack on Saudi oil tankers could strengthen the two Arab states’ position ahead of possible UN-sponsored peace talks between Yemen’s warring parties, which aim to avoid an all-out assault on Yemen’s main port city of Hodeidah.

The Western-backed military alliance launched an offensive on June 12 to wrest Hodeidah from the Houthis in a bid to cut off the primary supply line of the movement, which holds the most populated areas of Yemen including the capital Sanaa.

But the alliance did not make major gains and on July 1 it halted operations to give the United Nations a chance to resolve the situation in Hodeidah and the wider conflict which has killed more than 10,000 people.

“The only way forward is to get Hodeidah. What we are planning to do is give diplomacy every possible chance to secure that,” Anwar Gargash, the UAE’s minister of state for foreign affairs, said in London.

The United Nations fears that cutting off Hodeidah may trigger a famine in the impoverished country where around 8.4 million people are believed to be on the verge of starvation and thousands are struggling with diseases such as cholera and diphtheria.

The United Nations says the Houthis have offered to hand over management of the port to the world body, but the Saudi-led coalition says that the Houthis must quit the western coast.

One of the coalition’s main justifications for intervening in Yemen was to protect shipping routes such as the Red Sea. It has said it foiled previous attacks there in April and May.

The Bab al-Mandeb strait is only 18 miles (28.97 km) wide, making hundreds of ships potentially an easy target. The U.S. Energy Information Administration said an estimated 4.8 million bpd of crude oil and products flowed through it in 2016.