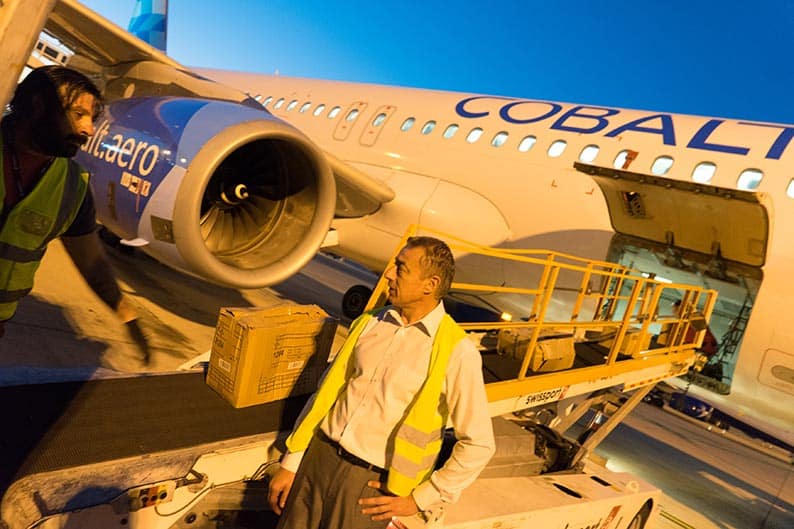 ONE thousand boxes of humanitarian aid left on a flight for Greece from Cyprus on Saturday morning, the first flight being sent with donations for people affected by the wildfires outside Athens on Monday that left 88 dead, hundreds injured and some still missing.

The first packages, which contained 10,000 kg of first-aid items, were transported to Greece at approximately 6:30am.  Representing President Nicos Anastasiades on the trip was volunteers’ commissioner Yiannis Yiannaki.

Yiannaki and Cyprus’ ambassador to Greece, Kyriakos Kenevezos delivered the packages the vice-head of the Attica region, Christos Kapatais.

The commissioner passed on a message from the President, saying that they would show their continued support for the people affected by the fires in Attica.

The Cyprus government has already sent €10 million to Greece as support and has opened a bank account for people wishing to send financial support.

Yiannaki thanked the people, organisations, regional governances, private companies, and government departments for their cooperation and their contributions.

He said that the support from the people had been a “tsunami of solidarity”.

In a post on Twitter in the morning, Hermes airport spokesman Adamos Aspris, said the boxes were ‘countless and precious’ and contained the ‘love of an entire population’.

Yiannaki is bringing together various media, banking institutions, national governing bodies and industries for a Pancyprian fundraising event and concert which will directly for the victims of the devastating wildfires that hit Greece on Monday. The money raised will help towards rebuilding public infrastructure that will primarily benefit the children of the Attica area.

Cybc will be organising an extra Radiomarathon fundraising event, starting at 6am on July 31. Television presenters, actors and artists which will help co-host the programme. From July 31 until August 3 any member of the public will be able to donate funds through the Bank of Cyprus or the National Bank of Greece.

The free concert will take place on July 31 between 5pm and 11pm in Nicosia’s municipal park near the House of Representatives. The bands performing will include Neon Knights, Cashiers and The Fuse.

Greece will begin burying the victims this weekend of a devastating wildfire near Athens which killed at least 88 people and raised recriminations over the government’s handling of the disaster.

Turkey, US relations can be saved, presidential spokesman says

Hamilton beats the elements to seize pole in wet Hungary