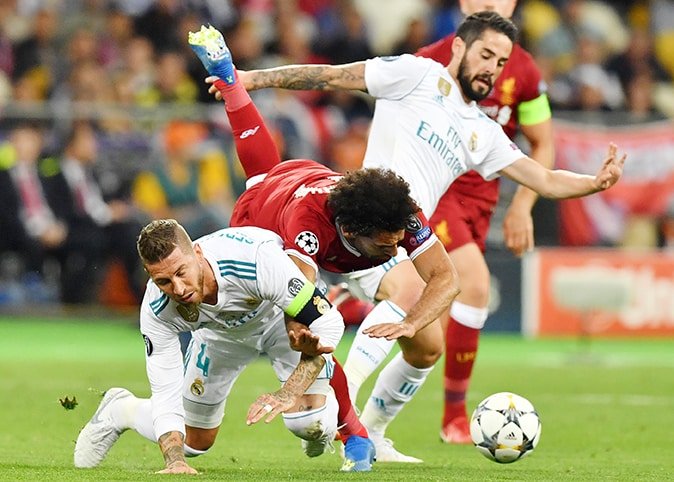 Liverpool star Mo Salah went down under a challenge from Sergio Ramos inside the first half an hour of the match and suffered shoulder ligament damage which forced him off the pitch.

Liverpool manager Jurgen Klopp has slammed Real Madrid captain Sergio Ramos for his foul on Mohamed Salah in May’s Champions League final, saying the Spanish defender brought down the forward like a wrestler.

Salah had a remarkable first season with Liverpool, scoring 44 goals in all competitions and helped the club reach the Champions League final against the Spanish giants.

The Egyptian talisman went down under a challenge from Ramos inside the first half an hour of the match and suffered shoulder ligament damage which forced him off the pitch.

“We are opening that bottle again?” Klopp asked in a news conference ahead of Liverpool’s International Champions Cup game against Manchester United at the Michigan Stadium in Ann Arbor.

“It is action-reaction-action-reaction and I don’t like that but – if you watch it back and you are not with Real Madrid – then you think it is ruthless and brutal.

“I saw the ref taking charge of big games at the World Cup and nobody really thinks about that later. But in a situation like that somebody needs to judge it better.

“If VAR is coming then it is a situation where you have to look again. Not to give a red card but to look again and say: ‘What is that?’ It was ruthless.”

Salah left the pitch in tears in Kiev with huge questions hanging over his participation at the World Cup in Russia.

Liverpool goalkeeper Loris Karius, who it later emerged had suffered a concussion during the match, made couple of blunders to concede two goals against Madrid who won 3-1.

Karius clashed with Ramos early in the second half and was seen holding the side of his head after the collision, which came before he made the mistakes that led to the goals.

Ramos later brushed off allegations that he had deliberately injured Salah, saying he was being unfairly painted as a pantomime villain.

“I’m not sure it is an experience we will have again – go there and put an elbow to the goalkeeper, put their goalscorer down like a wrestler in midfield and then you win the game. That was the story of the game,” Klopp said.

“Ramos said a lot of things afterwards that I didn’t like. As a person I didn’t like the reactions of him. He was like: ‘Whatever, what do they want? It’s normal’.

“No, it is not normal. If you put all of the situations of Ramos together then you will see a lot of situations with Ramos … It is like we, the world out there, accepts that you use each weapon to win the game. People probably expect that I am the same. I am not.”