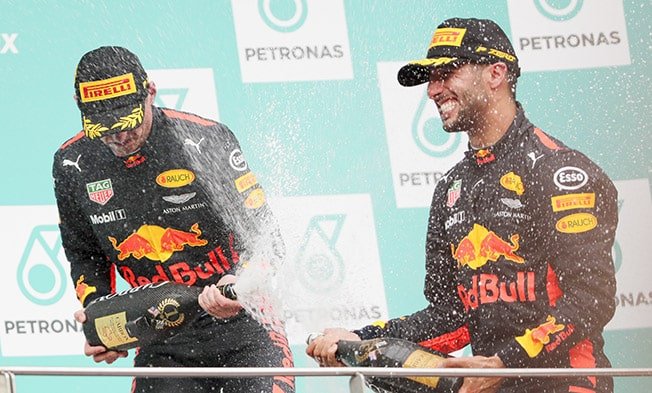 Red Bull fancy their chances in the heat of the Hungaroring this weekend but given that no driver has won in Hungary and gone on to take the title in the same season since Michael Schumacher in 2004 Lewis Hamilton will not lose too much sleep about that.

While the prospect of a Daniel Ricciardo or Max Verstappen victory is of little real concern to Mercedes’ championship leader what really matters is beating Ferrari rival Sebastian Vettel before Formula One heads into the August break.

Hamilton came away from an epic German Grand Prix win last Sunday having turned an eight-point deficit into a 17-point lead but he knows the stars were aligned for him in that race and a hurting Ferrari will come back strong.

“It’s usually not our strongest track,” said Hamilton, who has won a record five times at the circuit outside Budapest but never in a championship year.

Last year he sportingly handed back third place to team mate Valtteri Bottas, despite the loss of championship points, after the Finn had let him go past earlier to try to chase down the Ferraris.

“It’s not a power circuit so hopefully this extra chunk of power that Ferrari have doesn’t serve them as well there and maybe we can have a decent fight with them,” added Hamilton at Hockenheim.

“But they’ve always been really good on tyres and that’s quite a hot track so undoubtedly they’ll continue to be fast but … I’ve got high hopes for it still.

“Red Bull … will be very quick, I’m sure, in the next races where it is really strong for them. So it should be a closely matched race.”

Australian Ricciardo, whose new deal with Red Bull is expected imminently, took engine penalties in Germany for tactical reasons to give himself the best shot in Hungary.

That backfired as he retired from the race but the team say there should be no further penalties for a tight and twisty track that suits their car’s characteristics more than most.

Ricciardo won from pole in Monaco, a similarly slow track, and was triumphant in Hungary in 2014 but he is also fifth overall and 82 points adrift of Hamilton.

Verstappen is a point behind his team mate.

Vettel, who crashed out in Germany while leading on a slippery track, will want to atone for his dramatic error and he too has plenty of reason to be confident.

The German has won two of the last three races in Hungary, including last year, and his car has the performance to worry Mercedes.

The Ferrari engine has become a paddock talking point, with Hamilton and his team boss Toto Wolff impressed by their rivals’ evident improvement over the last two races with Vettel taking pole in Germany.

“In the cold light of day, we also know and recognise that we did not bring the quickest car to Hockenheim,” said Austrian Wolff after Hamilton went from 14th to first to record an almost miraculous victory.

“Hungary will see another tough fight with both Ferrari and Red Bull. It’s a high downforce track and on paper they should both be very fast in Budapest.

“However, if there’s one thing the German Grand Prix taught us, it’s the fact that predictions don’t determine race results.”