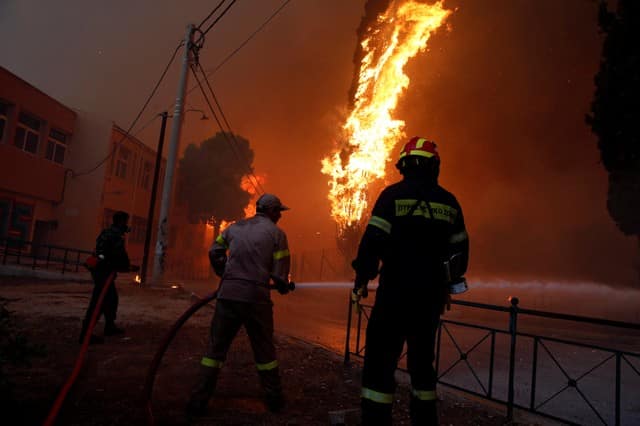 Firefighters and soldiers try to extinguish a wildfire burning in the town of Rafina, near Athens

I THOUGHT it would be like Nero playing the lyre while Rome burned, to write about the usual subjects this Sunday. Yet only those who witnessed the nightmare fire that engulfed the summer resorts at Attica last week can convey what it really felt like.

On the other hand, it does not feel right to go on about anything else. The Cyprus problem and Brexit are taboo anyway and it is far too early to engage in the blame game about the fire at Attica, if indeed any one is to blame at all: bad things happen sometimes.

More than 80 people died in the fire and many are still missing. They were trapped in their homes and in their cars. Even though they were near the sea they had no time to escape there. What cruel fate befell those who perished at Attica to die in a fire next to the sea! Still, there are questions to be asked and lessons to be learned and what the British do is have a judicial inquiry in front of an eminent judge.

There is one going on at present to look into the fire at Grenfell Tower in London’s richest borough last year in which at least 80 residents died in a fire that spread to all floors so fast many could not make it to ground zero in time.

In history, the conflagration closest to the cruel fate at Attica is the Great Fire of London of 1666. I don’t think as many people died in it but its destructive force had some similarities with the fire at Attica, like the speed with which the fire engulfed people fomented by strong winds.

Also, two notable diarists accurately recorded it in real time: Samuel Pepys and John Evelyn. Of the two I prefer Evelyn, as he was more observant about what was going on than what he was doing himself.

John Evelyn witnessed the Great Fire of London and his description of what he saw gives an impression of what it really feels like to go through such a nightmare.

Here is a compressed version of the entries in his diary of 4th and 5th September 1666:

‘The fire having continued all this night when conspiring with a fierce eastern wind in a very dry season; I went on foot to the same place and saw the whole south part of the city burning from Cheapside to the Thames, and all along Cornhill – for it likewise kindled back against the wind as well as forward – now taking hold of St. Paul’s church.

The conflagration was so universal, and the people so astonished, that from the beginning, I know not by what despondency or fate, but crying out and lamentation, running about like distracted creatures without at all attempting to save even their goods; such a strange consternation there was among them, so as it burned both in breadth and length, the churches, public halls, Exchange, hospitals, monuments, and ornaments, leaping after a prodigious manner, from house to house and street to street, at great distances from one the other; for the heat with a long set of fair and warm weather had even ignited the air and prepared the materials to conceive the fire, which devoured after an incredible manner houses, furniture, and everything. Here we saw the Thames covered with goods floating, all the barges and boats laden with what some had time and courage to save, as, on the other, the carts carrying out to the fields, which for many miles were strewed with moveables of all sorts, and tents erecting to shelter both people and what goods they could get away.

Oh the miserable and calamitous spectacle! All the sky was of a fiery aspect, like the top of a burning oven, and the light seen above 40 miles round about for many nights. God grant mine eyes may never behold the like, who now saw above 10,000 houses all in one flame; the noise and cracking and thunder of people, the fall of towers, houses, and churches, was like an hideous storm, and the air all about so hot and inflamed that at last one was not able to approach it, so that they were forced to stand still and let the flames burn on, which they did for near two miles in length and one in breadth. The clouds also of smoke were dismal and reached upon computation near 50 miles in length. London was, but is no more!

Rubbish is so endemic we stop ‘seeing it’

How Cyprus paid the price of vague wording