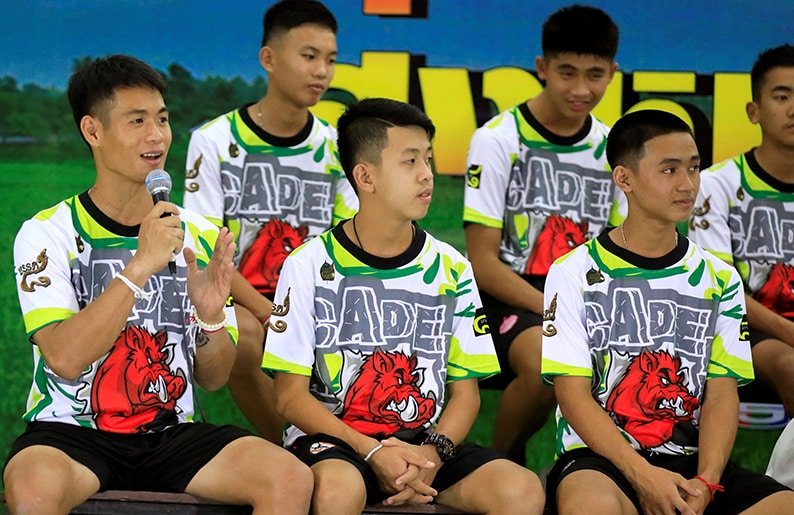 On June 23, a group of Thai teenagers got trapped in a chamber four kilometres deep inside the Tham Luang cave labyrinth in Thailand. This was an alien, pitch black and flooded environment. Seventeen days later, an international team of rescuers managed to bring them, and their football coach, out to safety and ended a remarkable and extraordinary odyssey. Thirteen lives were saved and one rescuer’s lost.

It is difficult to consider in concrete terms what the future for these rescued Thai teenagers holds. But if research findings on trauma are to be taken seriously, there is a significant likelihood that the teenagers and those closely related to them, including rescuers, may experience mental health issues following their ordeal.

Psychological studies have long demonstrated a link between PTSD (post-traumatic stress disorder) and an increased risk of anxiety, depression, phobias and other ailments. In situations of acute stress and fear of the unknown a cascade of physiopsychological (and neurochemical) changes take place. These changes include alterations in various hormones (e.g. cortisol, adrenaline and norepinephrine) which relate to the fight or flight response; and changes to the heart rate, blood pressure, blood-oxygen levels (e.g. chest pains, hyperventilation), mobility (e.g. muscle tension) and cognitive abilities (e.g. racing thoughts, confusion and inability to think clearly).

This cascade of changes and responses to stressors is loosely defined as the ‘general adaptation syndrome’. A crude analogy here may help. As in a modern car whose ‘brain’, the ECU (electronic control unit) or otherwise PCM (powertrain control module), registers fault codes in a ‘freeze frame’ and ‘live data’ and creates adaptive maps to correct the recorded imbalances, so does the human brain register stressors (e.g. tension, disruption of the circadian rhythm, breathlessness, fear, guilt, blame or despair). If these readings fall outside the usual normal parameters they may indicate a ‘malfunction’. It attempts to correct such deviations from the acceptable behavioural parameters by introducing modifications to physiopsychological states in the belief that the new ‘mapping’ will serve to deal with the situation and protect the person from more serious harm.

Following the registration of the mental and physiological reactions to stressors and their effects, an ‘adaptive memory’ (a block cell, if you wish) is formed for adaptive strategies. This is used as a reference point to compensate for the unusual and stressful experience in order to adapt and regulate behaviour and physiological functions thereafter in the belief that it reintroduces an acceptable balance to the disruption that has occurred. It means that the brain will use the registered combined responses to create a new standard of mental and physiological functions as a regulating guide to the future functioning and performance of the person in question.

Trauma, therefore, creates stressors which require the brain and body to adapt to the experience. This adaptation adjusts parameters and values in a plus or minus manner. For example, in physiological terms there may be an increase in blood pressure, blood sugar levels, stomach acid, blood lipids, immune deficiency, wasting of muscle and so on. The effects could include peptic ulcers, hypertension, stroke, diabetes, cardiovascular disease, opportunistic infections, cancer, osteoporosis, sexual dysfunction, weight loss or gain, nerve damage, nausea, increased worry and vigilance. In the long run the individual’s adaptation to these strategies takes its toll on mental and physical health. The person begins to struggle to maintain a workable balance. Therefore, unless matters are sorted in the short term, in the long run the mapped strategies become dysfunctional rather than functional. Psychologically, the effect can be an overriding feeling of haplessness and incapacitation.

When the teenagers first became aware of their predicament of being trapped, they may have temporarily neutralised trauma by seeing their entrapment as part of the adventure. But once they began to question their fate and suspect that they were trapped beyond the bounds or possibility of rescue; and found themselves in a stressful life threatening situation, their adaptive responses must have put them in a standby fight or flight mode. The registered stress about pitch black darkness, oxygen, health, food, safety and survival may have led to physiopsychological remapped responses to deal with the fear of vulnerability, dehydration, hunger, drowning, sleep deprivation, sickness or death; and the feelings of loss, anger, guilt, blame and disorientation. They may have also started entering a psychological shutdown process of resigning to the inevitable and gradually losing the will to fight on.  In extreme cases this leads to what is known as ‘psychogenic death’.

Once they were successfully rescued the teenagers passed, and are currently passing, through a long period of readaptation. Their brain is comparing the original physiopsychological default values and parameters exhibited prior to the experience in the cave; the physiopsychological maps of adaptation (which registered trauma and responses to it) in the period the teenagers were trapped in the cave; and the new physiopsychological values and parameters of life following rescue so as to reach a reconstructed homeostatic adaptive memory to allow the teenagers to engage in their everyday lives from that moment on. Crucially, though, the reconstructed memory mapping does not permanently erase the stressors and the trauma. Hence, despite the alterations in various physiopsychological values and components, the adaptive memory is still ‘contaminated’ with the traumatic experience.

So, although health professionals claimed that the Thai teenagers were in good health and not stressed; that in their first encounter with the rescuers the teenagers appeared to work together and draw on each other for support; that they appeared in good spirits and with a positive attitude, these impressions may camouflage the real underlying issues. The underlying matrix of physiopsychological processes could prove to tell a different story.

The teenagers may have survived the ordeal and emerged with a smile on their face. But it is inconceivable that having had that sort of traumatic experience they have not been affected and changed by it. Deep inside their physiopsychological adaptive memory cell blocks, there remains the registered trauma, fears and stresses of their nightmarish ordeal. These may emerge in the short and long term as mild or severe personality changes which may find expression, covertly and overtly, in the form of new physical and mental stresses.

A good comparative example is that of the 2010 Copiapo mining accident in Chile. The accident trapped 33 miners for 69 days three-quarters of a kilometre underground. All were safely rescued. At the time of rescue, they came out in great spirits. With the passage of time they were plagued with serious mental health problems. They spent time in and out of rehabilitation; turned to alcohol or other addictions; reported unexplained fears, disorientation, resentment and suspicion, alienation, isolation, depression, psychotic episodes, nightmares and flashbacks; and a few contemplated suicide.

In an interview, one miner retorted: ‘People saw the pictures of the rescue and they thought our hell was over…In fact it was just beginning’.

Whether the Thai teenagers’ real nightmare has finished or is about to begin, only time will tell.

Dr Andonis Vassiliades is professor emeritus of social science and penal studies at Middlesex University. He is also a qualified and experienced clinical psychotherapist.