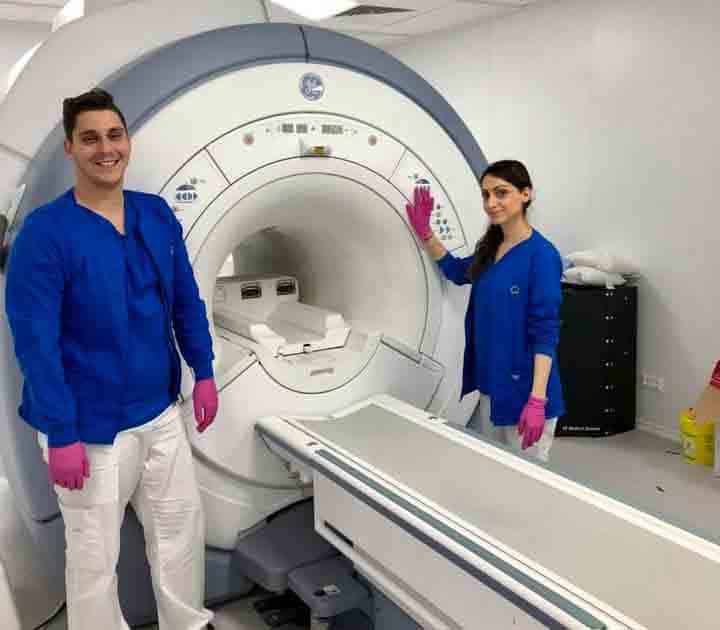 PET scan machine at Limassol's German Oncology Centre, one of the private clinics that has said it will join Gesy

Described as a small miracle, the German Oncology Centre in Limassol, which began operating nine months ago, has offered some desperately needed respite for patients undergoing debilitating cancer treatments.

The biggest change is that it offers radiotherapy treatments which formerly had only been available at the Bank of Cyprus oncology centre in Nicosia.

This meant patients from all over Cyprus had to make their way to the capital. Patients from Paphos and Limassol residents had to travel some 150km and 70km each way to get radiotherapy treatment which would only last some five minutes a day.

Charities such as Pasykaf and the Anti-Cancer Society have long offered free buses for patients taking them back and forth on a daily basis. The route is both exhausting and takes up patients’ days leaving them with little time to do anything else or even go to work.

In June, the health ministry signed an agreement with the German oncology centre, allowing the state to refer cancer patients to the private facility in Limassol for radiotherapy treatments and PET/CT (positron emission tomography-computed tomography) scans for which the government would cover the costs.

The deal is valid for a year and allows the state to renew it every year for the next two, provided there are no other contenders offering the same services which would then mean there would be a call for tender.

Applicants are examined by a health ministry review board, chaired by Dr Adamos Adamou, who was appointed by the Cabinet and patients receive their response within a week.

Since it began operating nine months ago, the centre has dealt with 2,000 cases, chairman of the German oncology centre Kikis Kazamias told the Sunday Mail, ranging from radiotherapy, PET scans and chemotherapy.

At present chemotherapy is not part of the deal between the government and the centre and is only offered privately for those who can cover their own expenses or have private health insurance.

There have been about 200 referrals from the state, roughly half have been for radiotherapy and the other half for PET scans.

Until now, patients who needed a PET scan had to be sent abroad, Kazamias said, but since the German oncology centre began operations, public health sector patients have been referred to them.

This has been beneficial for both the state and the public, he said, as prior to the oncology’s operations, people in need of a PET scan were sent abroad, most commonly Greece, the UK and Germany.

While the government would cover the cost of the scan, which ranges between €1000 to €2,500, patients had to cover flights and accommodation out of their own pocket. Now, they only have to go as far as Ayios Athanasios, Limassol.

Although radiotherapy treatments are not as draining as chemotherapy, Spyroula Argyridou, who heads Limassol’s branch of Pasykaf, said patients particularly from Paphos and Limassol have been helped tremendously by no longer having the trouble of journeying to Nicosia.

“Radiotherapy takes five minutes. Patients can go back home, go to work and go about their lives as opposed to losing out on their entire day just to get to Nicosia and back,” she said.

Argyridou said there were instances where patients had cancer with a metastasis to their spine and needed radiotherapy. “Imagine them being on a bus with all the bumps on the road going up and down.”

The move to open the German oncology centre and have it work with the state “is the miracle that happened. This is what I applaud.”

The buses transferring patients to Nicosia have visibly fewer people but there are no concrete numbers as of yet as it still only been a few weeks, Argyridou said.

But Thalia Pikridou, of the Anti-Cancer society in Paphos told the Sunday Mail that the deal with the German oncology centre had only affected a small number of patients they dealt with.

According to Pikridou, they usually have about 40 patients per day they take to Nicosia from Pafos, with a few stops in Limassol to pick up more patients.

“The numbers are more or less the same as they used to be,” she said.

This is because most of them are chemotherapy patients and therefore haven’t really benefited from the agreement.

“We’ll start to see the effects of the deal in the next few months when many of these patients currently undergoing chemotherapy will require radiotherapy.”

Argyridou said the while the deal was a major first step and greatly applauded, she hoped it would be extended to chemotherapy treatments too.

“Because that is what’s really draining patients. The ideal would be that the agreement with the German oncology centre can be for both radiotherapy and chemotherapy.”

Kazamias said the centre was willing to discuss an agreement for chemotherapy too.

“But this must come from the health ministry.”

Elena Ioannou found out last October that she had breast caster. After a mastectomy to remove one breast, she then underwent gruelling chemotherapy lasting 16 weeks and had the means to use the German oncology centre.

“There was no way I would’ve gone to Nicosia for it. I don’t know how people did it. I felt so drained and sick after the sessions, especially towards the end of my treatment.”

Kazamias stipulated the government covers the expenses for the drugs people use for chemotherapy.

Ioannou told the Sunday Mail she is now doing radiotherapy treatment five days a week for six weeks and she continues to go to the centre.

“It’s just a 10 minute drive from my house, it’s so much easier than what my sister had to go through.”

Her sister a few years ago had a brain tumour for which she had to get radiotherapy and had to make the long trek to Nicosia.

“It had to be at the same time every day from Monday to Friday. If her husband took her, it meant he couldn’t open the shop he ran. So sometimes her father would take her, sometimes I would, we all worked around it.

“The treatment itself didn’t take too long but we had to go back and forth to Nicosia every day, it was so difficult for her and she lost so much of her day.”

Kazamias says that nonetheless, hundreds of patients are being helped.

“We feel satisfied because some of the services we offer are available for the first time in Cyprus (the PET scan and brachytherapy). Hundreds of patients that suffered because of the transport are also being helped and our contribution serves the public interest.”

“Currently, we have 10 beds for any internal incidents but this will be expanded.”

The next step for the German oncology centre that by this winter, it will house a unit with 40 beds for patient care, Kazamias said.

Our View: Indications are that we’ve reached the final act on Cyprob