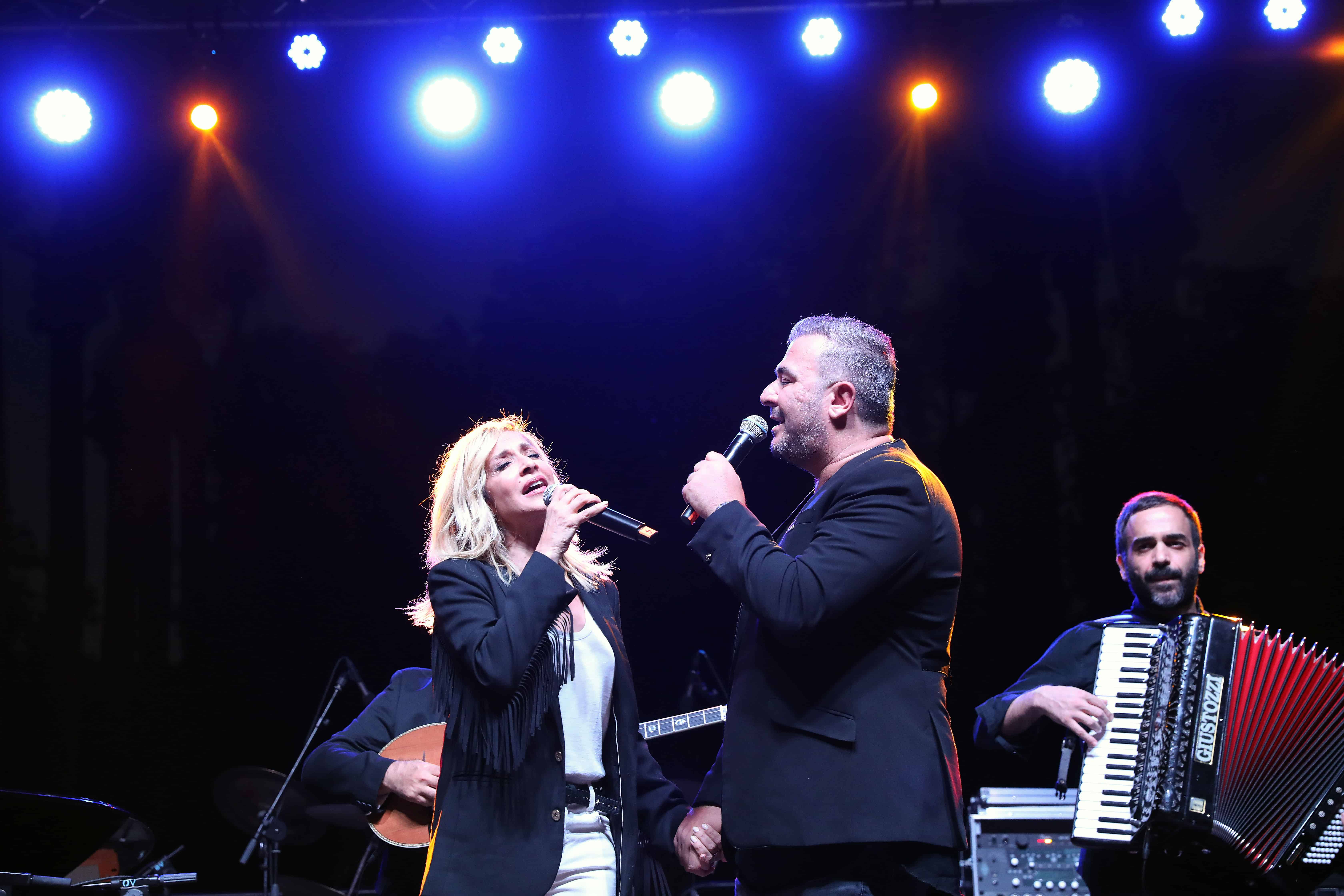 Thousands of people gathered on Tuesday as the sun set over Nicosia municipal gardens to stand by Greece and support the people affected by wildfires that hit the eastern Attica region last Monday, killing scores and leaving dozens missing.

Popstars Anna Vissi and Antonis Remos headlined the Stand By Greece concert, kiosks were set up by the organisation Hope for Children, and stalls sold food and drink for tickets costing €1, €2, and €3. Doors opened at 5pm and all funds collected are set to go to Greece and are expected to be used to help rebuild public spaces that were damaged in the blaze.

“We are deeply touched and proud that Cyprus has made this gesture.  My island is a great island,” said Vissi, who is from Cyprus after meeting with President Nicos Anastasiades ahead of the event.

Remos said he felt “blessed that all of Cyprus, all of the Cypriots, the president, and the media rallied the people to give this great aid to a place that is in need of love and support. And you have all provided this wholeheartedly.”

“We must support the effort and unite, in this collection of funds for the rebuilding of public space for children in one of the areas affected by the fires in Attica,” said Anastasiades.

He called on people to support the fundraising as it was with ‘deep sorrow that we have followed the unprecedented catastrophe in Greece’.

One of the volunteers involved in organising the event told the Cyprus Mail that the event ‘to make sure love is returned to Greece’ and that it was not about politics or about competition but rather to ‘help the innocent people’.

Over 200 volunteers arrived early to the event to help set up for the concert and to help organise the kiosks.

“We want to show our solidarity to our brothers and sisters in Greece,” the volunteer said.

The organisation Hope For Children, which organised the event, said that they are looking to work with various groups in Greece to rebuild public spaces for children affected by the fire.

Commenting on the fires, last week the Fire Services Chief, Marcos Trangolas said: “Due to the strong winds, which were 10 to 11 on the Beaufort scale, the spreading fire’s pace was disproportionate to the pace used for the areas evacuation.”

Cyprus sent a 64-member team made up of members from the fire, civil defence, and ambulance services to help deal with the aftermath of the blaze, which killed at least 91 people.

At Tuesday’s event, volunteerism commissioner Yiannis Yiannakis said: “Once again, the Cypriot people, together with all media groups, companies, banks, and NGOs is showing there love and solidarity to the people affected by the fires in Greece.”

He added that the fund would be used to build for the ‘children, who deserve it’.

“We want to bring hope to these people.”

Yiannakis said that the amount that was gathered will not be announced yet, due to the fact that the collection is running until Friday, and authorities want to be able to give a more complete picture of the total.

The structures to be built, he added, have also not been selected, as the decision will be based on ‘what is most needed’.  He said that they are working together with the Greek authorities and would decide together.

Also on Tuesday, a radio marathon was launched in the morning by state broadcaster CyBC with the participation of all media outlets and artists to help collect funds as part of efforts to help Greece deal with the after-effects of last week’s devastating fires.

The money raised from the #StandByGreece campaign, will help towards rebuilding public infrastructure that will primarily benefit the children of the Attica area.

Speaking at the concert, the head of CyBC, Thanasis Tsokos thanked all the media groups that supported the radiomarathon and the event.  He said that fund collection would be running until Friday, and that whoever wishes to donate still has time.

“Good morning friends, good morning Cyprus.  Cyprus is waking up with a sense of love and support.  At this time, the radiomarathon of support to our Greek brothers is starting, the people affected the fires in Attica,” CyBC radio presenter Athina Violari said on Tuesday as phone lines opened.

From July 31 until August 3 any member of the public will be able to donate funds through the Bank of Cyprus or the National Bank of Greece by simply going into any branch and telling the teller that they wish to make a donation.

Benitez offered to Spain by Newcastle as World Cup coach