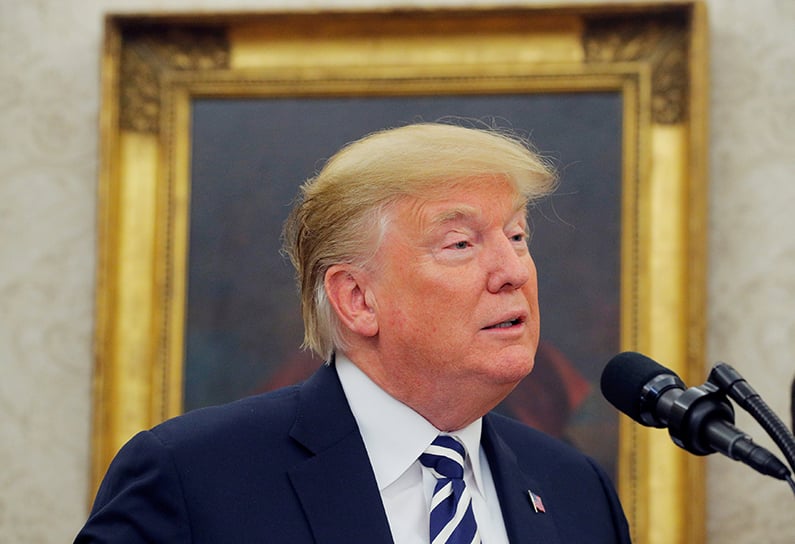 US President Donald Trump on Tuesday slammed the powerful Koch-led political donor network as “globalist” and “a total joke,” rejecting the conservative group amid signs of a growing public fissure between the president and business over trade and immigration.

Trump’s comments follow news media reports that some officials within the Koch donor network are concerned the president’s trade policies could fuel a recession and want to scale back support of Republican candidates.

The Koch brand – including the privately held energy company Koch Industries – has become synonymous in political parlance with pro-business policies and libertarian ideology. The company and the Koch political operations have pushed relentlessly for lower taxes, less regulation and free trade.

The political spat comes less than four months before the Nov. 6 midterm congressional elections that have Trump’s fellow Republicans seeking to maintain control of both chambers of Congress.

The Koch-backed network of political organizations – which were founded by brothers Charles and David Koch but now include a larger group of donors – have historically spent millions of dollars backing Republican candidates for office.

But as Trump has sought to pull his party toward more protectionist trade positions, backers of free trade policies like the Koch network have been reluctant to provide support. That could mean Republican candidates who seek to closely align themselves with Trump on trade are forgoing backing from groups like the Koch network.

“The globalist Koch Brothers, who have become a total joke in real Republican circles, are against strong borders and powerful trade. I never sought their support because I don’t need their money or bad ideas,” Trump wrote in a post on Twitter.

“Their network is highly overrated, I have beaten them at every turn.”

Neither representatives of Koch Industries or officials from the political network responded to a request for comment.

Charles and David Koch have been a force in American politics for decades, channeling billions of dollars into conservative causes. But the billionaire industrialist pair distanced themselves from Trump during the 2016 presidential election, in part over his divisive rhetoric toward Muslims and others.

Charles Koch has taken the lead after his younger brother, David, stepped down from their political group and their company earlier in June due to poor health.

While the two have backed Trump over taxes and judicial appointments, the Kochs have joined other business groups as vocal critics of the president’s trade policies.

The Kochs’ influence has been powered by their fortunes from Koch Industries, the second-largest privately held US company with operations in a range of sectors from refining and chemicals to ranching and forest products.

The pair have championed free trade and have launched a multimillion-dollar campaign to oppose Trump’s tariffs, which have targeted China, Canada, Mexico and the European Union, among others. Republicans have traditionally also backed free trade, and some lawmakers have grumbled about Trump’s moves but have stopped short of taking any major action.

Trump has defended his trade policies, saying he backs free but “fair” trade to support US workers.

In another twist, the Koch-backed network over the weekend also touted its support of Democratic US Senator Heidi Heitkamp, according to the Washington Post and Bloomberg.

Heitkamp is one of a handful of vulnerable Senate Democrats facing tough re-election races in conservative states that overwhelmingly backed Trump in 2016.

Her Senate seat, along with those in West Virginia, Indiana, Montana and Missouri, are critical given the Republicans’ narrowly 51-49 hold on the chamber. She faces Republican US Representative Kevin Cramer, who Trump endorsed on Friday.

Greek detained for drugs in north