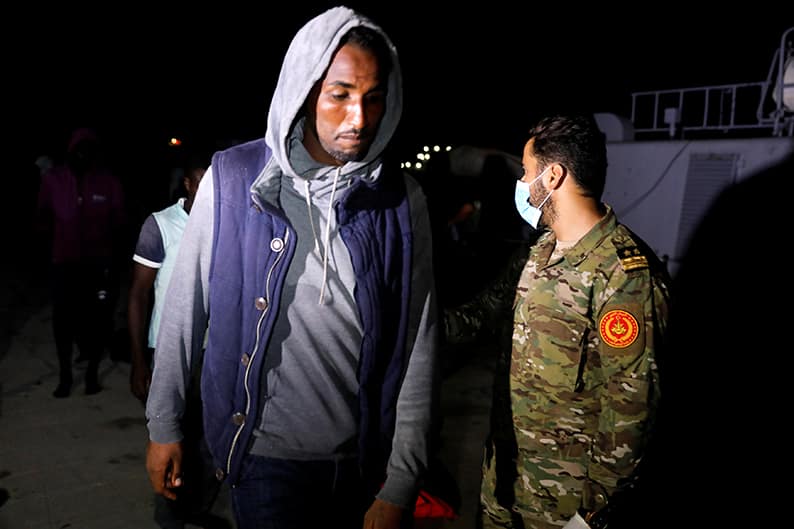 A rescue operation in which an Italian towboat rescued more than 100 migrants and returned them to Libya earlier this week may have been in breach of international law, the United Nations said on Tuesday.

A spokesman for the UN migration agency said it could not establish the location of the rescue, which is key to establishing migrants’ rights, although some other parties involved in the case have made contradictory assertions about the incident including where it took place.

The rescue coincides with a growing perception among human rights groups that some European countries are taking an increasingly hard line in their efforts to cut the number of migrants arriving on their shores, after Italy’s new government closed its ports to charities’ rescue boats in past weeks.

According to Spanish charity Proactiva Open Arms, an Italian towboat, Asso 28, rescued more than 100 migrants from international waters on Monday and took them to Libya, their country of departure.

This would constitute a breach of international law, under which people rescued in international waters cannot be returned to a place where their lives are put in danger. Both the United Nations and European Union have acknowledged that Libya is not safe.

Italy’s coast guard initially said on Tuesday that the rescue was coordinated by the Libyan coast guard, and later clarified that the operation had taken place in Libya’s so-called “search and rescue (SAR)” area.

The Libyan coast guard was not immediately available for a comment.

Libya’s SAR is not clearly defined but is widely understood to extend far beyond its national waters.

Proactiva spokeswoman Laura Lanuza said its members learnt the rescue occurred in international waters because their boat Open Arms was nearby and they could listen to radio communications between the Italian ship and the Libyan authorities.

The UN refugee agency said the operation “could represent a violation of international law,” it said on Twitter.

A spokesman for the UN migration agency said the agency was still investigating the case but confirmed the return of the migrants to Libya.

He said the Libyans first told him the rescue operation was carried out by “an unknown vessel”, then changed their version and said the rescuing boat was Libyan.

The head of mission at Open Arms, Fabrizio Gatti, contradicted the Libyan version and said a member of the Asso 28 crew told him over the phone the Italian boat carried out the rescue and was taking the migrants back to Libya. He said he had a record of the conversation.

Asso 28 is now docked in Tripoli, the Libyan capital, according to Marine Traffic, a real-time information service on ships movements.

Charities are at loggerheads with the new Italian government and its right wing home affairs minister Matteo Salvini who has adopted a hard line to cut the number of migrants arriving on Italy’s shores.