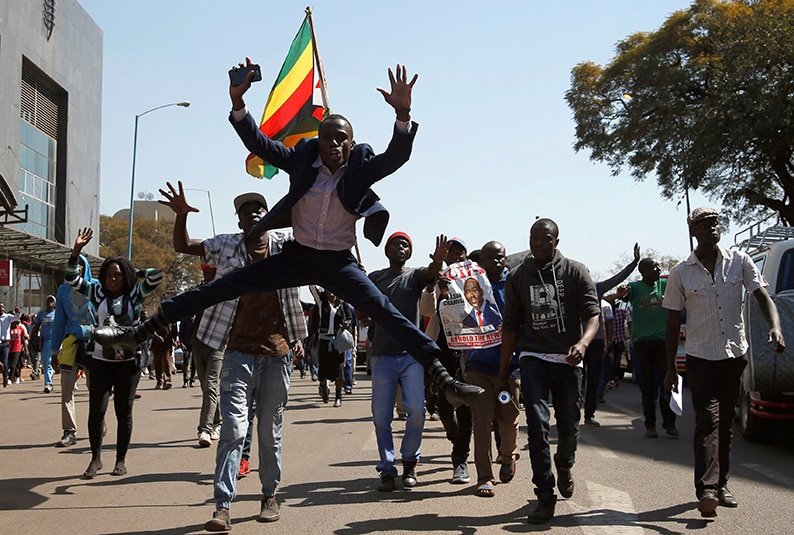 Supporters of the opposition Movement for Democratic Change (MDC) party of Nelson Chamisa, sing and dance as they march in the streets of Harare, Zimbabwe

They also questioned delays in releasing the results of the presidential contest in Zimbabwe’s first election since Robert Mugabe was forced to resign following a de facto coup in November after nearly 40 years in power.

The EU’s assessment is critical in determining whether Zimbabwe can shed its pariah status as it could help attract investors and trigger an economic revival.

Mugabe’s successor Emmerson Mnangagwa of the ruling ZANU-PF party and Nelson Chamisa of the opposition Movement for Democratic Change were the main contenders in Monday’s election.

The EU’s Chief Observer, Elmar Brok, said he did not yet know if the shortcomings would have a material effect on the outcome of the vote, and he criticised the Zimbabwe Electoral Commission (ZEC) for being at times “one-sided”.

The EU did not understand why the release of the presidential result was taking so long, he said.

“The longer it lasts that the results of the presidential election is not known, the more lack of credibility it provides,” Brok said.

“I would like to ask for as fast as possible the release of the presidential election,” he said. “The presidential results were counted first in the polling stations therefore I have still to learn why it will be published last.”

The electral commission had said it would start announcing results for the presidential race from 10.30 GMT, but this was delayed as commissioners read out more parliamentary results.

Opposition leader Chamisa accused the ZANU-PF of trying to steal the election after official figures gave it a two-thirds majority in parliament. He accused the commission of releasing the parliamentary results first to prepare Zimbabweans for a Mnangagwa victory.

“The strategy is meant to prepare Zimbabwe mentally to accept fake presidential results. We’ve more votes than ED (Emmerson Dambudzo). We won the popular vote (and) will defend it,” Chamisa said on Twitter.

In an indication of the growing tension, a crowd of about 100 MDC supporters gathered outside a Harare hotel where election results were being announced but police blocked the entrance to the building, a Reuters witness said.

“You can’t rig our election…this is a military government”, the crowd shouted. The situation was under control as police secured the area.

African observer groups said the vote was peaceful, orderly and largely in line with the law but they raised concerns about bias of state media and the commission. They also called for improvements in the counting procedure, saying the vote represented “a political watershed in Zimbabwe’s history.”

Zimbabwe was once one of Africa’s most promising economies but under Mugabe’s rule became tainted by corruption, mismanagement and diplomatic isolation. Its population of 13 million is struggling amid shortages of foreign currency, unemployment above 80 percent and lack of foreign investment.

The House of Assembly of Parliament has 210 seats and ZANU-PF’s two-thirds majority would allow it to change the constitution at will.

Voters in Zimbabwe traditionally pick a presidential candidate based on their party affiliation and the trend in the parliamentary election was expected to continue when results for the president are announced this week.

Chamisa’s MDC won in most urban centres, where it enjoys majority support. One independent candidate and a member from a party linked to Mugabe also won one seat each.

On Tuesday former MDC finance minister Tendai Biti and ZESN, the main domestic election monitor, said one in five polling stations – more than 2,000 in all – had not physically posted tallies on their doors, as required by law.

That omission gave room for the electoral commission, which ZESN and the opposition have accused of bias, to manipulate the results in favour of Mnangagwa and the ZANU-PF party, Biti said.

On Wednesday, the EU addressed the same issue.

“It is imperative that the results process is credible and transparent, with a full breakdown by polling station so that confidence in the outcome can be assured,” Brok said.

Building permits up 26 per cent in January to May