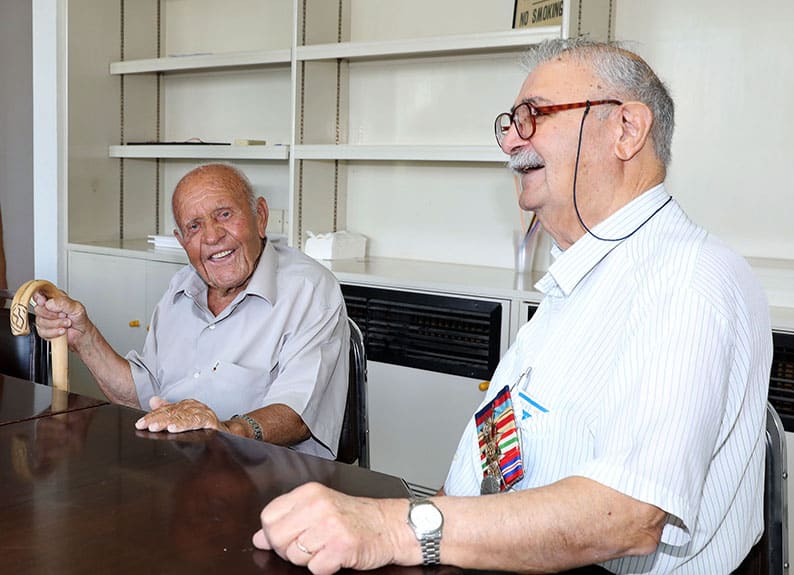 A Greek-Cypriot and Turkish-Cypriot who fought side by side in World War II only to find themselves in opposite camps in 1974, have reconnected for the first time after over 70 years.

Greek-Cypriot Menelaos Kouzoupis and Turkish-Cypriot Kemal Salih (Pili), both from Paphos, joined the British army to fight in the war, which broke out in early September 1939 and cost the lives of 50 million people from 70 countries.

Menelaos Kouzoupis, now 92, comes from the village of Ayios Photios and Kemal Salih, 95, from the Turkish Cypriot village of Falia, located in the same area at a distance of 3km.

When the war ended, they returned to Cyprus in the middle of 1946, and had since then lost touch. They met again after more than 70 years, and recalled their shared experiences which they still vividly remember, in a meeting that took place at the offices of the Cyprus Veterans Association in Nicosia that was arranged through common friends

They both recall joining up at the feast of Ezousas on June 29, 1944, in the Paphos village of Cholos, following a newspaper advertisement calling on the inhabitants of Cyprus, which was a colony of the British Crown at the time, to join the British forces in the war.

Kouzoupis said that he was only sixteen and a half years old, and had not informed his grandfather about his decision join the British army for fear that he would forbid him to do so because of his young age. He added that he had to lie about his real age at the army recruitment office for exactly the same reason.

He said that after being ranked, they were transferred to the English camp at Polemidia for training and then moved on to Syria, Palestine and ended up in Italy. Kouzoupis remembers that he shared a tent with Kemal, and still recalls his military number (21139) and Kemal’s (21142).

At the time when the two veterans fought side by side, Salih said that Greek-Cypriots and Turkish-Cypriots lived very well together, “they were like brothers.” Now things have changed, he added, but “what can we do.”

After the Turkish invasion of 1974, Salih left his village and now lives in Ayios Ermolaos in Kyrenia, and despite the passing of time he still speaks Greek fluently.

Kouzoupis said that “in 1974 I think it was the foreign finger that turned us against each other. There were no differences between the Greek Cypriots and Turkish Cypriots. We lived just fine. But the foreign finger made us separate into two camps. That is why I believe that a solution to the Cyprus issue must be found, even a federal solution, so that we can live together again and the good days can come again.”

“Right,” Kemal responded, blaming the responsibility for the non-solution of the Cyprus issue on the British. “When the British go and leave us on our own, we can go back to how we were in the old days.”

According to Cyprus Veterans Association, 30,000 Cypriots from all the communities of Cyprus took part in World War II. These include some thousands of Cypriots who lived in various countries abroad. Some 600 soldiers never returned to Cyprus, and only 338 soldiers have data on the fronts where they fell, as well as the dates and cemeteries where they were buried.

A tale as old as time