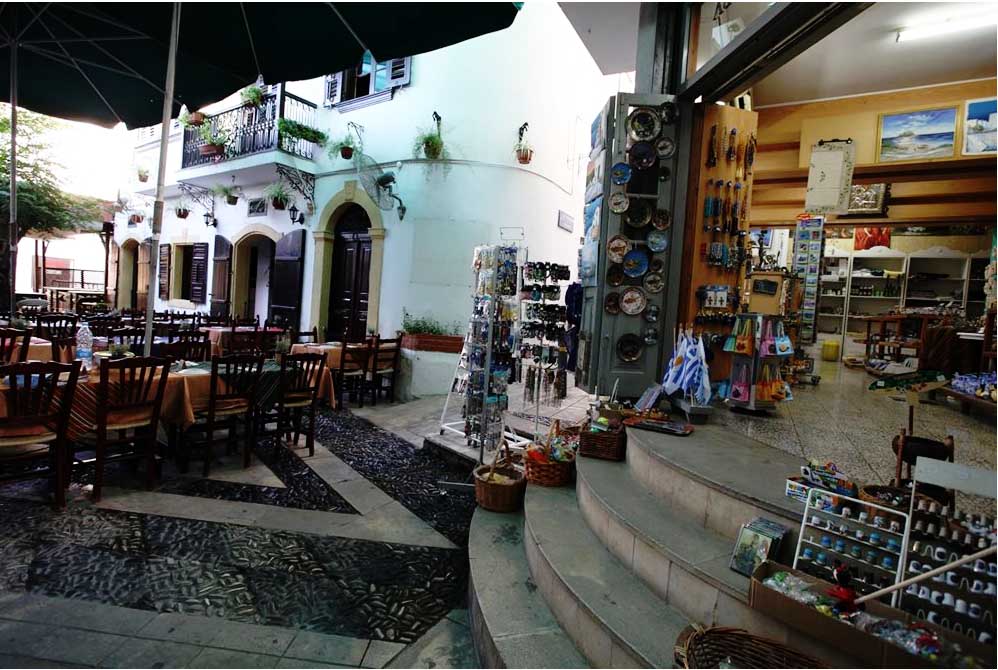 The traditional tourist shopping and restaurant area of Laiki Yitonia

Visitor numbers are up, but the city’s share of the tourist pie should be bigger stakeholders say

Nicosia has always been the poor cousin of Cyprus’ tourist industry, and although it has benefited from the tourism boom in recent years, those in the sector say much more could be done to attract the more than three million tourists expected to visit Cyprus this year.

Unable to compete with the mass tourism, all-inclusive deals offered in the coastal towns, Nicosia has had to rely on its museums, culture and shopping to try and lure visitors away from the beach. This means virtually all visitors are day-trippers brought up to the capital on coaches by tour operators or driving themselves in rental cars.

According to industry stakeholders, further growth of tourism in the Nicosia is inhibited by the lack of good public transport from coastal towns and their inconvenient operating hours, the city’s never-ending construction works, and the need for further embellishment of the capital.

Tight budgets are another reason, they said, as travel agents will take tourists to as few places as possible where there is an entrance fee.

Another factor is the north. The tourists are coming to Nicosia, but all too often they simply sail down Ledra street to cross over to the other side.

According to the Nicosia Tourism Board (NTB), the capital attracts only around six to seven per cent of the overall tourist arrivals on the island.

According to data of the Cyprus Tourism Organisation (CTO), tourists visiting Nicosia stay for 2.3 nights, much lower than the overall average of 6.6 days.

In total, just 121,720 arrivals were recorded last year in Nicosia’s hotels and other hospitality establishments out of the overall 2.41m arrivals in all districts including mountain resorts.

Nicosia has never aspired to compete with other towns but has focused on alternative forms of tourism such as cultural and religious tourism, conferences and incentives tourism, business tourism and sports tourism.

Nicosia, according to the NTB, for the general tourist is a more popular destination in the spring and autumn. The summers are simply too hot.

“Tourists do come to Nicosia in the summer, for one-day trips however from others cities,” an official of the NTB told the Sunday Mail, adding that many Germans, Israelis and Russians come to visit places like the Byzantine museum and the archbishopric.

According to the chairman of the Association of Cyprus Travel Agents (ACTA), Vasilis Stamataris, Nicosia remains a business centre because government services are based there, and therefore the capital’s hospitality businesses rely mostly on business trips and conferences.

He said specific numbers of the day trips to Nicosia are not available as they are organised by many travel agencies or by private visitors.

“Tourists rent cars and tour the island on their own, there are also private tours,” he said.

But apart from its museums, galleries and cultural heritage sites it is Nicosia as the last divided capital city of Europe that attracts the visitors. Many are curious to cross to the north.

“The occupied areas is something exciting as it is a ‘forbidden’ experience, and naturally it sparks the curiosity of tourists,” a source within the tourism industry said.

Some Nicosia shop owners near the Ledra street crossing complain that tourists just walk past them to get to the north.

“That is a sensitive, political matter, no one can stop them from crossing,” the source said.

But the opening of the crossings has also meant fewer visitors in Nicosia’s museums, stakeholders said.

“According to my experience, there were many more visitors 20 years ago to the capital’s museums than today,” vice chair of the tourist guides’ association, Maria Aristidou, said.

She put this down to the opening of the crossings but also because travel agents, to lower costs, will take their groups of visitors to just one site where entrance fees apply.

“Visitors want to go to the occupied areas, they are intrigued by the oriental atmosphere,” Aristidou said, adding that northern Nicosia has more mediaeval sites than in the southern part.

One bonus she has noticed is that with so many students now choosing to study at universities in Nicosia as part of student exchange programmes, there has been increased interest in tours of Nicosia.

According to data from the Cyprus Museum – Cyprus’ oldest and largest archaeological museum – from the more than 84,000 visitors in 2005, the number has gradually dropped to 33,609 last year.

This does not mean that tourists are not visiting Nicosia, but simply there is now more to see when they get there.

“The opening of the crossing points has greatly affected museum visits, as travel agents have diversified the product. Instead of bringing tourists as in the past, to two museums in Nicosia, now it is one museum and some other site in the occupied areas,” director of the Byzantine Museum, Yiannis Eliades said.

He added that last year the museum saw a 77 per cent increase in visits, but that was due to an important and popular exhibition they had on 13th century Cypriot icon painters.

Eliades said that the increase in overall tourist arrivals has benefited Nicosia as well, but that more efforts are needed to give the capital a further boost.

Museums and cultural wealth, he said, are what keep Nicosia alive as they are the only incentive for tourists to visit.

“Efforts are being made but there are construction sites all over Nicosia and there is no easy access to the old part of the town, where many museums are located,” he said.

Eleftheria square – now under redevelopment for six years – “is an open wound”, Eliades said. “Who knows when works will be completed. We are asking for support.”

The director of the AG Leventis Gallery, Loukia Loizou-Hadjigavriel, said that tourists who visit the gallery do not do so in organised groups but individually.

“Tour operators mostly avoid visiting museums or venues with an entrance ticket,” she said, adding that foreign visitors go to the art gallery because it was mentioned in tourist guides, or for special temporary exhibitions or even because there is promotional material in their hotel.

“We have special offers for guests in some hotels with a reduced entry fee. We also have a partnership with Aegean and Gold and Silver members have free entry,” Hadjigavriel said.

She said that around 35 per cent to 40 per cent of their visitors are tourists. Last year, Hadjigavriel said, around 95,000 visitors visited the art gallery, including schools.

“There is a steady increase of our visitors of around five to 10 per cent. Our goal is to organise a variety of events, periodic exhibitions, etc. to have recurring visitors.”

But she added that compared to the overall tourist numbers few visit Nicosia, especially in the summer.

“There is no good public transport from the coastal cities to Nicosia and when there is, their operation hours are prohibitive, since a tourist does not want to be in the city during the hot hours of the midday.”

Laiki Yitonia, the traditional tourist shopping and restaurant centre of the walled city, has been hit by the competition following the development of Ledra and Onasagoras streets nearby, which now attract most of the visitors.

But Nicosia’s share of the general tourist boom has meant that the first four months of 2018 have been very good for Panikos Poniros, a Laiki Yitonia shop owner.

In his 16-years as shop owner, Poniros said, “this year has been one of my best seasons.”

The secret to his success, he said, is that he sells products with Cypriot references and replicas of items found in museum.

“I have many recurrent customers from many countries,” Poniros said.

According to Aristidou, even though Nicosia cannot compete with other cities, the capital is not doing what it should to attract more visitors.

“Money is being spent on the promotion of Nicosia, but does it yield results?”

To attract more visitors, the Nicosia municipality, in cooperation with the CTO and the Tourist Guides Association offers free tours twice per week in the capital. On Monday mornings there is bus and walking tour in Pallouriotissa and Kaimakli and on Thursdays a walking tour of the old part of Nicosia and its walls.

Also, on Tuesdays and Fridays, in the mornings, the Nicosia Tourism Board, in cooperation with the Tourist Guides Association, offers guided tours of the Cyprus Archaeological Museum.