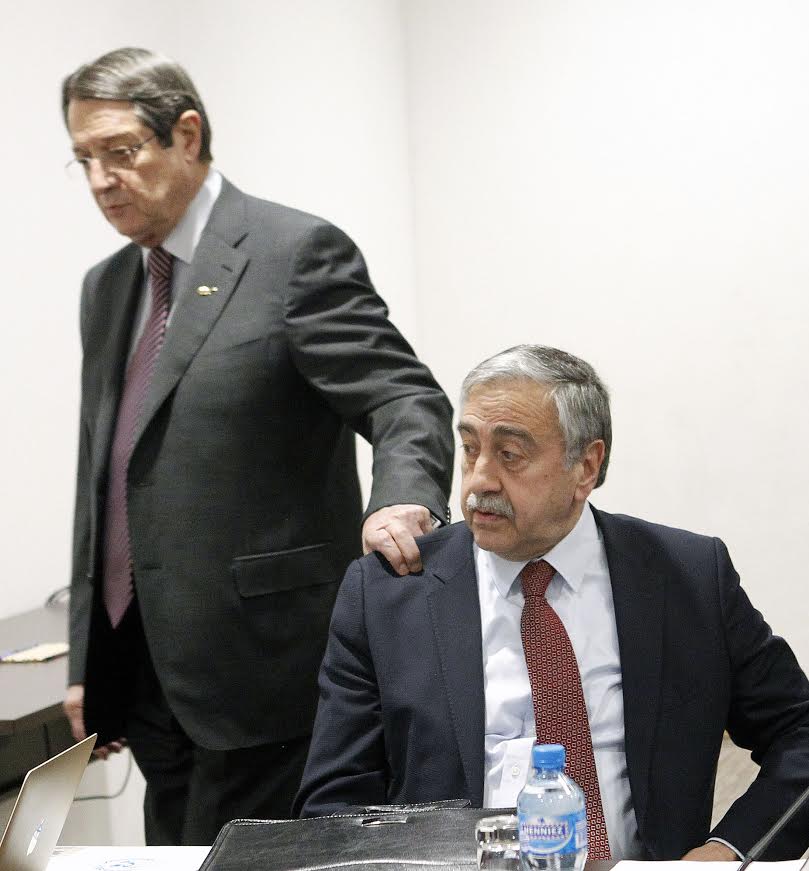 The two leaders in Geneva in January 2017

In view of the announcement by Mustafa Akinci, the Turkish Cypriot leader, that when UN sponsored Cyprus talks resume, they should have a time schedule, it is important to examine and evaluate the proposal.

At this time it is not clear whether this suggestion has been accepted by Nicos Anastasiades, the Greek Cypriot leader, but the impression persists that Anastasiades does not appear to have moved from the traditional Greek Cypriot position of no “suffocating” deadlines and no arbitration.

It is also not clear why the Turkish Cypriot leader has raised the issue of a timetable for the talks, though the frustration with the tradition of open ended talks failing, as well as the developments in Turkey, and the fact that the Turkish Cypriot community needs to develop a plan for the future, are all likely factors behind the new initiative.

There may also be another factor, with his victory in the presidential elections Nicos Anastasiades has time and does not need a timetable. Mustafa Akinci was elected leader of the Turkish Cypriot community in April 2015 which means over three years have gone of his five-year term. He has just one year and eight months left.

Given this situation it is in the interests that negotiations for a Cyprus settlement should begin as soon as possible, and that a time schedule be set, with a draft settlement document being presented at the end on a take-it-or-leave-it (Camp David) basis. Owing to the situation in northern Cyprus, that time schedule should not be more than 12 months of negotiations, plus three months of preparations for the referendums in both communities.

Given the progress made by the two leaders it is imperative that a settlement be found before the Turkish Cypriot elections.

A year is long enough for a settlement to be negotiated, assuming better and more efficient procedures, and cannot be described as a suffocating timeframe. It is also short enough to be completed before the Turkish Cypriot elections.

The experience with other negotiations for conflict resolution suggests that time schedules or deadlines can be useful, because they force the decision makers to focus on deciding on the difficult issues to be taken. President Carter locked up the Egyptian President Anwar Sadat and the Israeli Prime Minister Menachem Begin for 13 days at Camp David in 1978, to successfully negotiate a peace agreement between Egypt and Israel.

Nevertheless, he failed to resolve the broader Middle East conflict involving the Palestinians, owing to Prime Minister Begin’s insistence on continuing with settlements in the Palestinian areas, a decision that has plagued the Middle East talks ever since.

Richard Holbrook brought about a settlement of the Bosnian conflict by locking up all the political actors involved (other than the Bosnian Serbs) in the US Dayton airbase for 20 days of intense negotiations in 1995, until an agreement was reached.

In both cases there was considerable follow-up work on the details, but Holbrooke emphasises that though the details are important, one should not lose the momentum. In his book “To End a War” in the crucial “Showdown Chapter” he states: “ There is a sense that peace is probably inevitable … But the critical question (is) will the Bosnians grasp an imperfect peace or let the war resume…They have let other opportunities for peace slip away before. It could happen again.”

Even though the delegations involved in the negotiations were divided within themselves, the chance did not slip away and the Dayton Agreement was signed and went into effect. After 23 years it seems to be working.

The same could be said of Cyprus, many opportunities for a solution have been lost, and after 44 years no solution can be perfect. The key question then is whether in general the settlement will improve life for all the sides, and whether we can make it work. That requires that the parties involved work together to implement the agreement, and make the necessary compromises.

Such negotiation time scales of less than one month are suffocating, and mean that negotiations are like a pressure cooker, and would not be accepted by Cyprus politicians. But it is unlikely that that is what Akinci had in mind.

How then can a time scale be considered for the Cyprus talks? A schedule has not been tried before, though the Annan Plan was prepared with a deadline for a settlement to be reached by the time of Cyprus’ accession to the European Union, namely from November 1999 to May 2004. That is three to four years.

Based on the knowledge gained and the complexity of the issues, it should be possible to complete the negotiations within a year, and reach agreement internally within both communities, as well as the three guarantor powers. Then a period of at least three months is required for referendums in both communities. But this time schedule means that the rules should be changed. The type of changes proposed are as follows:

Another important consideration is that an agreement on a time schedule, on the lines suggested above, would convince the UN that the situation has improved and that negotiations should begin as soon as possible.

Britain plans for opt-out organ donation scheme to save lives