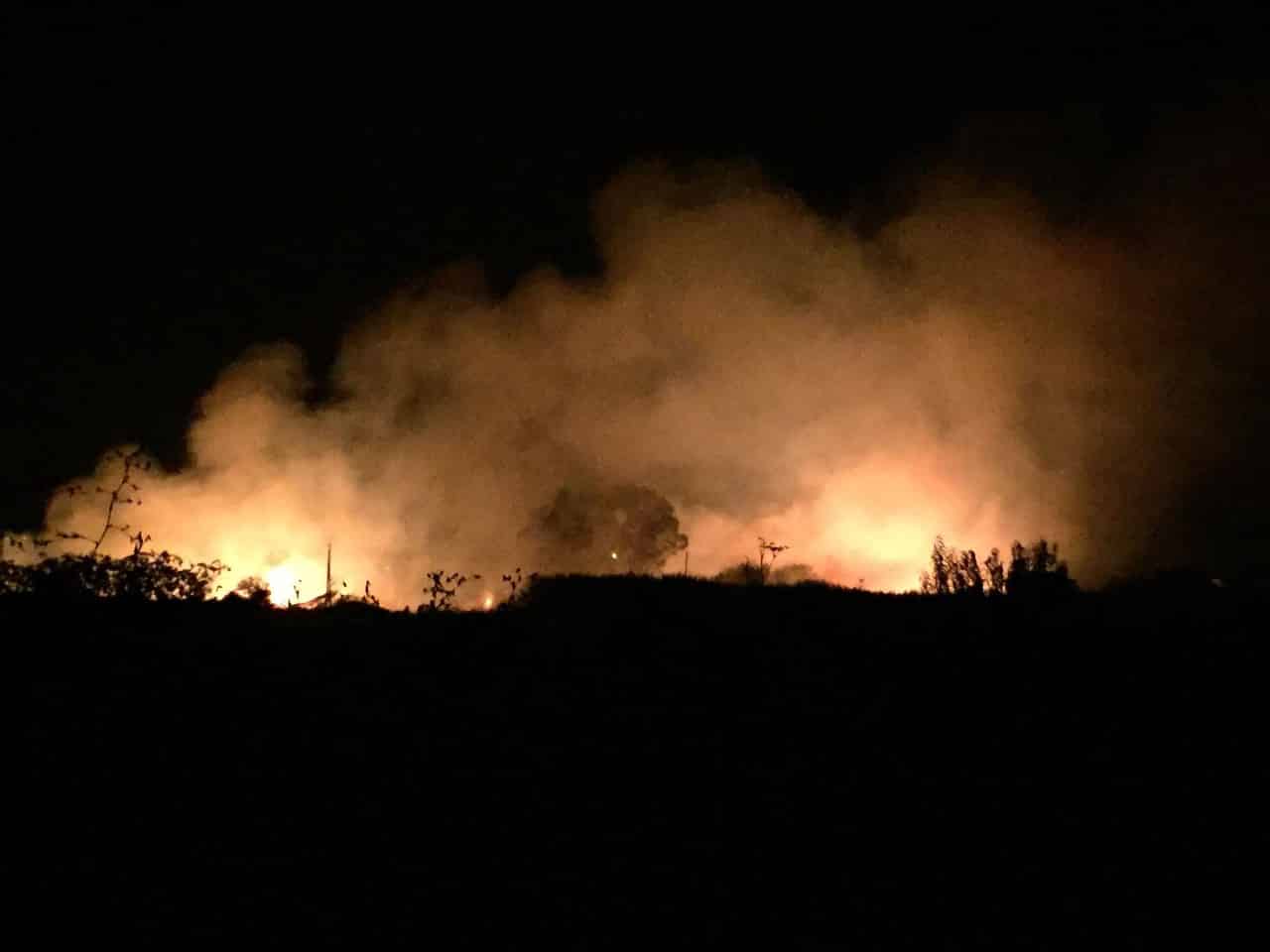 File photo of the fire on early Sunday morning

The mayor of Polis Chrysochous on Monday partly blamed government services for an arson attack that prompted the evacuation of 200 people from the popular beach campsite in the early hours of Sunday, saying they had failed to clean up a dry river bed where the blaze was set only 500 metres from the camp.

A meeting is to be held on Tuesday to ensure that all measures have been taken to safeguard the campsite, mayor Giotis Papachristofi said.

The fire started around 12.30am in a river bed, which dries out in summer and which can become overgrown with vegetation. The campsite is surrounded by Eucalyptus trees, tall grasses, bamboo and other vegetation, some 1.5 hectares of which was destroyed in the fire.

Papachristofi said that despite promises made to both him personally and the municipality of Polis that the area would be cleared of overgrowth late last year, no action was taken.

“It was also promised by the responsible government departments that it would be cleared in September, October, and then look what’s happened,” he said. He added that the forestry department was now clearing away the debris, and that next week, the entire area would be cleaned “very well”.

“At 10am tomorrow (Tuesday), the forestry department, the environment department, the fire department and the body responsible for the rivers, will meet to decide what measures will be taken to protect the campsite and ensure that there are no similar problems around this area,” he said.

The 200 or so campers and a number of homeowners in the area were evacuated by civil defence officers shortly after the fire started, and a marine patrol boat was ready to take them to safety if the need arose, according to the fire service. Around 1.5 hectares of wild vegetation and eucalyptus trees was destroyed.

The fire was brought under control at 3.30am and fully put out by 4am. Initial investigations showed it was started deliberately. Police are investigating.

David Wilkins, a Cyprus Mail online commentator posted on Monday: “I was there on Saturday night and I have to commend everyone, from the camp managers, the staff, police and the fire brigade. I was there with my wife, sister, her boyfriend and three kids. I have to say it was so scary to wake up to sound of burning trees, and red skyline. Anyway, we made it and sad that people set this on purpose. Hope they catch them.”

The manager of the campsite was on Monday looking to allay fears that the facility had been affected or was closed following the fire.

“It has been wrongly reported in much of the media that the fire was at the campsite and so people have been calling us thinking that we are closed and we are not. Everything is operating as normal,” Lakis Matheou, told the Cyprus Mail.

Matheou said that the fire occurred outside the campsite, well away from the entrance but added that everyone was evacuated for their own safety, including staff, to an area further towards Latchi.

The facility manager said that campers left behind their tents, taking only their personal items in their vehicles, and remained away from the campsite all night. Structures at the campsite were hosed down with water and the emergency procedure was followed to the letter.

“Some people were scared and anything can happen if the wind changes or something like that. We left for practical security reasons and it was the correct thing to do,” he said. He added that the flames were leaping high into the air. “Luckily it was brought under control and there was no damage to the site.”

He said once the emergency services gave the all clear, everyone returned to the camp.

Matteou said the relevant authorities were now going to clean what’s left. “They should have done it before,” he said. “There is another similar area close to the campsite and I’m sure that they will clear this and tidy it up too now,” he added. Matteou said there was no damage to the campsite, nor was there a smell of smoke, as the fire was a considerable distance away from the entrance.

August is the busiest month for the campsite, with around 2,000 to 3,000 overseas and local campers visiting during this period. The site was created by the Cyprus Tourism Organisation (CTO) in the late 1970s early 1980s.