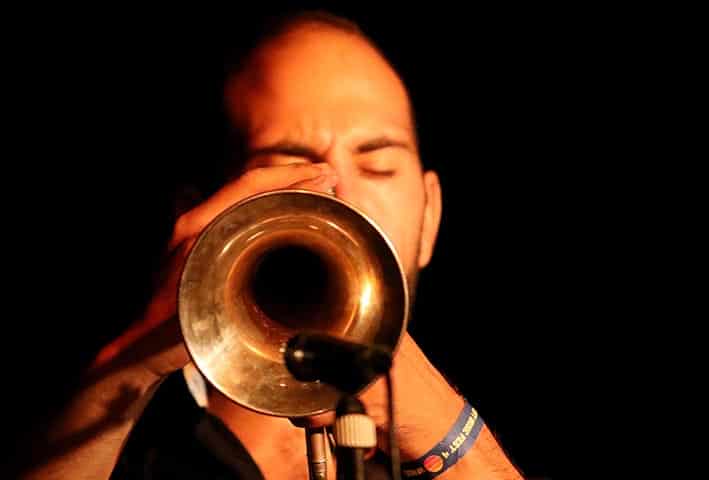 Asked to name a few wind instruments, most of us could come up with the flute, the clarinet and possibly the oboe. Those who remember their music lessons might be able to add the recorder and bassoon. But few of us (apologies to you musicians out there!) realise that everything from the trombone to the tuba also fall into the classification. Which bodes well for the upcoming Windcraft Festival… Because not only will there be delicate, ethereal music to delight the discerning listener, there’s also going to be plenty of oom pa pa for the big band-loving crowds…

Taking place on August 11 and 12 and organised by the non-profit cultural association Windcraft Loud, the annual Windcraft Music Fest is now in its fifth year: a triumph of modern musicality in the ancient village of Katydata. The get-together sees bands from all corners of Cyprus descending on the picturesque village each summer.

An event which animates this sleepy hamlet with its concerts, workshops, screenings and parallel activities, this year’s festival is billed as a place where “the music of the Balkans and the Eastern Mediterranean meets with the tradition of jazz and modern electronic sounds.” Organisers promise “a two-day music fiesta with the winds in the leading role; where tradition and modernity co-exist; where you can hear good music and feel good cheer everywhere!”

Well, perhaps not everywhere – though a total of three stages (known as the Inn, the Orchard, and the Little Square) in the village surrounds will be more than enough to bring this windy ethos to the public… “Having been established as one of the loveliest summer music events of the Cypriot countryside, the Windcraft Music Fest promises,” organisers explain, “to continue presenting music concerts of the highest level while aiming to blend harmonically the past with the present, creating the right circumstances for human interaction, cultural understanding and celebration!” Which basically translates thus: lovely music, wonderful location, top-notch instrumentalists and plenty of community spirit.

The festival will feature both local and international artists as well as a number of bands and will allow the musicians to showcase their original music projects – in particular those influenced by music traditions of the world. On the first day the main stage will host bands that flirt with ethnic and jazz music: the quartet of Israeli pianist and composer Uriel Herman, whose pieces blend traditional, classical, jazz and rock music elements; the new project from Cypriot ud player Giannis Koutis in collaboration with Armenian musician Vahan Galstyan (duduk) and German Ruven Ruppik (percussion), which is entitled Levant Project; and the ethnic jazz Alkis Agathokleous Quintet. The day’s events culminate in the Little Square, with a sunset performance from the Pafos Big Band playing well-known swing tunes from the golden era of jazz, followed by dancing in the orchard to the grooves of The French Experience, courtesy of Marios Takoushis and Stelios Xydias.

The second day brings in the brass, with the sound of the Balkans from Captain Stambolov, a brass band orchestra from France which intends to “serve up its famous Balkan turbo-futuristic recipe”. We’ll also be hearing from the Chouska Ensemble of Greece, who will be offering a rather more traditional approach to Balkan music, coupled with a touch of jazz. Then we’ve got the Windcraft Band sharing the stage with various special guests and reinventing well-known Cypriot and traditional tunes; the Marlia Project presenting their “jazz experimentations on traditional songs, poly-rhythm fusion improvisations on cover songs, and tunes from their latest album”; and lastly Dimitris Baslam in collaboration with the University of Cyprus presenting a performance of Sofia the Bee – a theatre show with live music.

Over the two days of the festival, a number of free music workshops and seminars which promise to “involve everyone in the process of music creation” will also be taking place. And, to encourage “interactions between visitors and locals, different parallel activities such as an exploration game in the village and a photographic walk will be organised.” But best of all is a mysterious event which calls for “more than 100 people to join their breath in producing sound from a 48-metre long handmade flute!” Which may not make much in the way of an oom pa pa, but is certainly bound to blow the socks off the village of Katydata!

August 11 and 12 in Katydata. For more information and bookings, call 22 377748, email [email protected], or visit www.windcraftmusicfest.com/ Tickets cost €20 per day, or €25 for a two-day pass. No charge for under 12s. All activities and workshops are free of charge

Film reviews: The First Purge *** and The Darkest Minds **

Napa gets swimming in musical waves