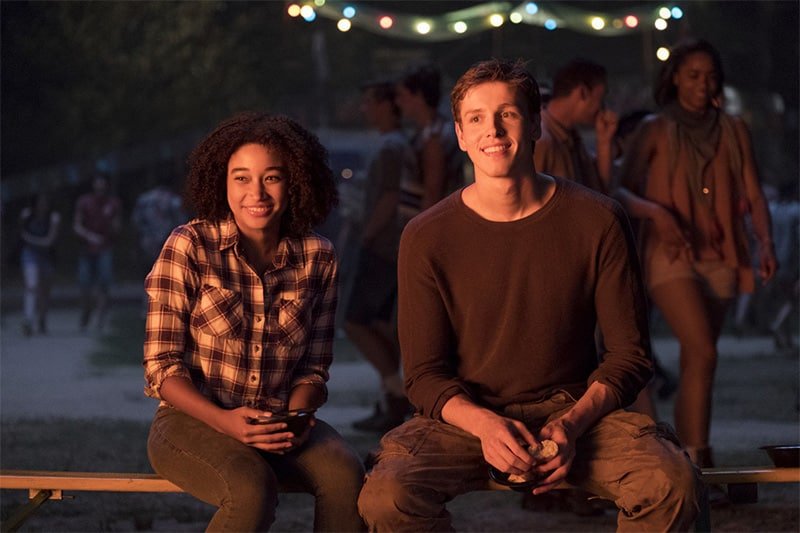 “What do we do now?” asks one survivor of another at the end of The First Purge. “Now… we fight!” replies her friend, underlining even further – if it needed to be underlined – the film’s status as socio-political manifesto. This is, unabashedly, ‘Black Lives Matter: The Movie’, less universal than the previous films in the Purge franchise – even though, ironically, it’s the first to be shown in Cyprus cinemas.

The franchise is based on a counter-intuitive premise: a once-a-year ‘Purge’ when society suspends law and order for 12 hours, making everything legal, even murder. Given how much modern life seems to be going in the opposite direction (the gated communities, the culture of fear, the ever-increasing regulation of everything), that kind of anarchy works as a potent nightmare – and a lucrative one. This lively prequel is the fourth Purge movie in five years, and the first not to be directed by James DeMonaco (who, however, wrote the script); given that DeMonaco is white while director Gerard McMurray is black, he may have handed over the reins to avoid igniting yet another fuss about cultural appropriation. America is going through a weird moment.

That weirdness – very much including the weirdo in the White House – finds full expression in this transparent allegory, with Republicans and Democrats being elbowed aside by a populist, fear-mongering party named the New Founding Fathers whose stated aim is to “revive this country” (a.k.a. make America great again). They’re the ones who organise the Purge for the first time – as a cathartic “experiment” – with the poor and predominantly black neighbourhood of Staten Island as the guinea pigs. Residents are urged to “release your anger”, making for a slight thematic muddle since releasing black America’s anger is exactly what this film seeks to do as well – but of course the baddies mean against each other, whereas The First Purge advocates revolution. “The state will not win,” as community activist Nya (Lex Scott Davis) puts it.

Nya is one of our heroes, along with ex-boyfriend Dmitri (Y’lan Noel), a ghetto drug dealer even more sympathetic than the one in Moonlight. Then again, almost everyone is heroic here; with the exception of two comical hags and a terrifying junkie known as Skeletor (he has a touch of the voodoo priest in Live and Let Die), the residents of Staten Island mostly refuse to take advantage of the Purge – at which point the government, showing its hand, sends in white-supremacist militias to massacre people and make it look like the experiment is working. The climax, set in a cramped housing project with lights flashing and fire alarms blaring, has real visual brio (earlier, two silhouettes with glowing eyes peer out from a lurid, sickly patch of bottle-green). This is a wild, violent, totally unsubtle B-movie, but when historians look back on Trump-era paranoia its explosive crudeness will be part of the charm, just as Reagan-era paranoia now gets reflected in gritty 80s B-movies like They Live. America, purge thyself.

The mid-August lull at the multiplex (another annual rite, like the Purge) is throwing up some interesting smaller movies – though The Darkest Minds has a hefty $34 million budget and hopes to launch a Young Adult franchise along the lines of The Hunger Games and Divergent. That’s unlikely to happen – but the film does start and finish very strongly, even if it sags into bland juvenile adventure in between.

As in Divergent, kids in a future society are divided into factions (this time by colour, with ‘Orange’ at the top of the pyramid) – but the premise matches The Purge in fear and loathing, with the under-18s having developed mutant powers and become public enemies in the eyes of the adult Establishment, variously exterminated or locked up in prison camps. The opening, with kids keeling over and our heroine Ruby (Amandla Stenberg) mysteriously disowned by her parents – a moment worthy of a body-snatcher movie – promises a more traumatic drama than what follows, in which Ruby meets a trio of fellow runaways and they all drive around in a minivan, like the gang from Scooby-Doo.

Clichés abound, from a cheesy ‘You had one job!’ moment when a henchman screws up to a didactic ‘Don’t be ashamed of who you are’ moment, Ruby learning to live with her Orange-ness. The film slackens altogether when our heroes get to a hippy-dippy sanctuary run by an obviously dodgy figure known as Slip Kid, a fellow Orange who tries to get fresh with our girl – but in fact The Darkest Minds builds to a satisfying ending, with Rube wallowing in maudlin self-denial, like the heroines of old, before being reborn as an orange-daubed Amazon, like the heroines of today. The very last shot shows a fist raised in anger and defiance – and it’s more conventional than the anger in The First Purge but it still makes clear that, outside the escapist fantasies peddled by Marvel and Co., US films are indeed catching on to the stormy mood in that polarised country. What do we do now? We fight, obviously.

Willian keen to stay in Chelsea under Sarri

Festival gets its wind up