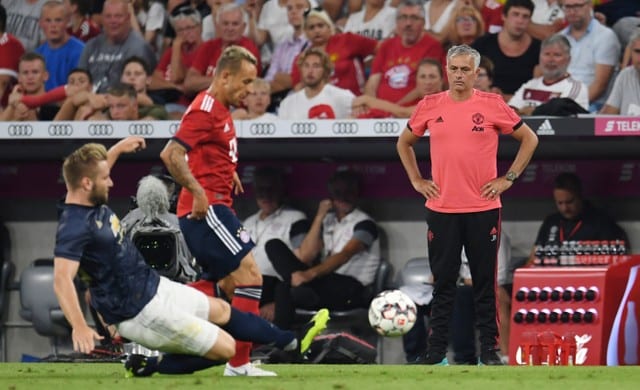 The Red Devils were beaten 1-0 by Bayern Munich at the Allianz Arena, five days before their Premier League campaign begins at home to Leicester

Jose Mourinho believes his Manchester United team had nothing more to give as they ended their pre-season with a narrow defeat to Bayern Munich.

United were beaten 1-0 by Bayern Munich at the Allianz Arena, five days before their Premier League campaign begins at home to Leicester.

Manager Mourinho, without some key players due to their involvement at the World Cup, including Paul Pogba, Romelu Lukaku and Jesse Lingard, brought on academy prospects James Garner, Axel Tuanzebe, Tahith Chong and Demetri Mitchell during the second half.

At full-time, the Portuguese compared his youthful team to the raft of talent at Bayern’s disposal, including experienced players such as Robert Lewandowski and Arjen Robben.

“Finally, it’s over. Finally, such a difficult pre-season is over,” Mourinho told manutd.com.

“The players were, once more, brilliant. They could not have done better than what they did. (It was a) fantastic experience for the boys.

“There was a moment I was looking to the area and there was Axel at centre-back to left, Demetri at left wing-back, Garner in midfield on the left and Chong.

“At the same time it was Lewandowski on Axel, Robben on Mitchell, (Leon) Goretzka on Garner and (Niklas) Sule on Chong.

“It was fantastic, absolutely fantastic. We were playing against their best team, it was their complete squad apart from (Corentin) Tolisso.”

Mourinho, who has been linked with moves for Tottenham defender Toby Alderweireld and Leicester centre-back Harry Maguire before Thursday’s transfer window, selected Alexis Sanchez as captain in Bavaria.

Forward Marcus Rashford donned the number 10 shirt, with the club later confirming he would keep the squad number, previously worn by Zlatan Ibrahimovic and Wayne Rooney, for the coming season.

“Yeah, he wanted it. He always wanted it,” Mourinho said of Rashford’s switch from 19 to 10.

“Of course, he respected the big Rooney and then Zlatan wanted to have it.

“He was in the shadow, waiting for the opportunity and now the shirt is empty. It’s something fantastic for the kid, let’s give the shirt to him.”

Javi Martinez scored the only goal of the game, heading home from a second-half corner.