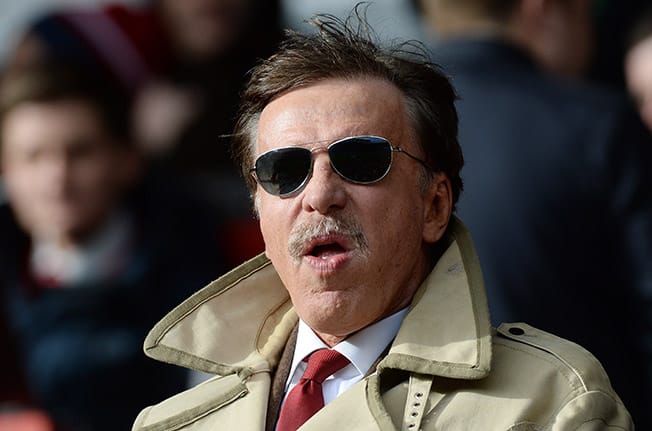 American billionaire Stan Kroenke has struck a deal to take Arsenal private by buying out Russian rival and minority investor Alisher Usmanov in a move that values the English Premier League soccer club at around £1.8 billion.

The deal comes at a crucial time for the north London club as it embarks on life without long-time manager Arsene Wenger who stood down in April after 22 years in charge.

It also brings an end to the standoff between the two tycoons, who had both battled for control, and enables Kroenke to squeeze out the independent shareholders who had used the annual meeting to lambast the board for not spending more on a team that last won the Premier League in 2004.

The Arsenal Supporters’ Trust and one independent shareholder condemned the move, saying it would allow Kroenke to run the business with no oversight and to add debt to the balance sheet.

The bid will be part funded by a 557 million pound loan from Deutsche Bank.

Kroenke, a 67-percent shareholder in Arsenal who also owns the U.S. Denver Nuggets basketball team and the Los Angeles Rams American Football team, said in a statement to the London stock exchange that a single owner would be able to pursue its strategy more quickly.

“We appreciate Mr Usmanov’s dedication to the Arsenal Football Club and the storied ethos and history the club represents,” he said.

Initially viewed with suspicion by the board, Kroenke started building up his position from 2007 as he slowly bought out the families who had run the 132-year-old club for generations.

He said on Tuesday he had now received an irrevocable undertaking from Usmanov to sell his 30 percent stake and would buy out the remaining independent shareholders at 29,000 pounds per share.

Usmanov, who is ranked by Forbes as Russia’s 10th richest man with a fortune of $12.5 billion, owns stakes in some of Russia’s biggest companies including phone operator Megafon, iron ore producer Metalloinvest and Internet group Mail.ru, among other investments.

Arsenal fans have long complained that the club has not ploughed enough money into the team and even let some of the best players leave to join rivals, including Robin van Persie and Alexis Sanchez who both joined Manchester United.

Arsenal finished the 2017/18 season in sixth place behind the two Manchester clubs, fierce local rivals Tottenham Hostpur, Liverpool and Chelsea. That marked the second season running it had missed out on the lucrative European Champions League.

David Kershaw, an independent shareholder, fan and chief executive of advertising group M&C Saatchi, told Reuters he was concerned that the deal would not lead to a better performance on the pitch.

“I think it’s very sad that we’re in danger of losing any transparency into how our club is run,” he said.

His comments were echoed by the Arsenal Supporters’ Trust, an independent group representing fans who fear their influence will be diminished.

“Many of these fans … hold their shares not for value but as custodians who care for the future of the club. Kroenke’s actions will neuter their voice and involvement,” the Trust said in a statement.

While many Americans run clubs, or franchises, like a business, the richer owners of Chelsea and Manchester City have thrown hundreds of millions of pounds at their clubs to buy the world’s best players.

Founded by a group of workers at the Royal Arsenal armaments factory in Woolwich, the Arsenal team were League champions on 13 occasions, including three under Wenger, and FA Cup winners a record 13 times.

New manager Unai Emery, who joined from Paris St Germain, will be given a baptism of fire this weekend when Arsenal kick off their new season against Manchester City.