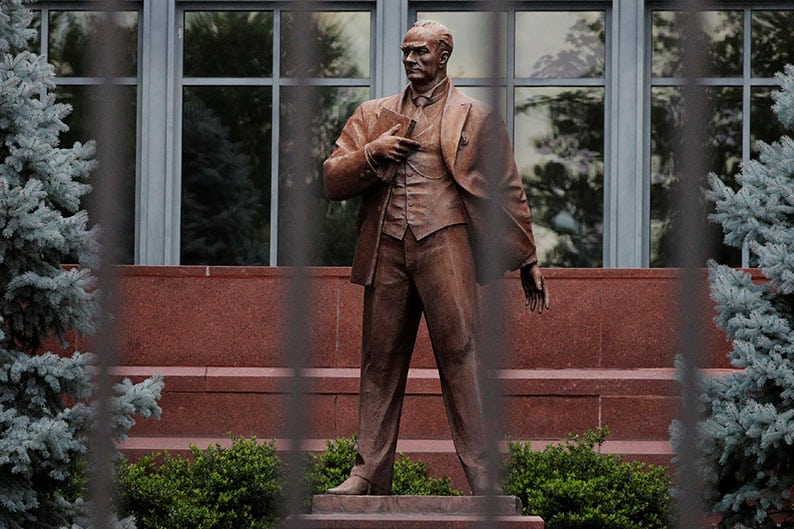 A statue of Mustafa Kemal Ataturk, Turkey's founder, stands in front of the Embassy of Turkey in Washington

A delegation of Turkish officials will head to Washington in two days to discuss an ongoing row between the two Nato allies, broadcaster CNN Turk reported on Tuesday, citing diplomatic sources.

Relations between the two countries have steadily worsened, strained by differences on Syria policy and over the trial of US pastor Andrew Brunson inTurkey. A trade spat between the two sent Turkey‘s lira currency to plunge to a record low on Monday.

Over the weekend, the US Trade Representative said it was reviewing Turkey‘s duty-free access to the US market, after Ankara imposed retaliatory tariffs on US goods in response to American tariffs on steel and aluminium. The move could affect $1.7bn of Turkish exports.

On Tuesday, CNN Turk cited diplomatic sources saying that Ankara and Washington had reached pre-agreements on certain issues, but it did not elaborate.

The Turkish government was not immediately available for comment, and the US State Department did not respond to a request for comment.

US President Donald Trump’s administration has demanded that Turkey release Brunson, an evangelical pastor who has lived in Turkey for more than two decades and has been charged with supporting a group that Ankara has blamed for an attempted coup in 2016. He has denied the accusations.

Erdogan said that Turkey would retaliate by freezing assets of the US interior and justice ministers in Turkey “if they have any.”

The Turkish currency, which has lost 27 per cent of its value this year, fell some 5.5 per cent to a record low of 5.4250 against the dollar on Monday, its biggest single-day drop in nearly 10 years.

Greece to tear down unlicensed constructions after killer blaze

Man pleads not guilty to defrauding retired teacher out of €571,000