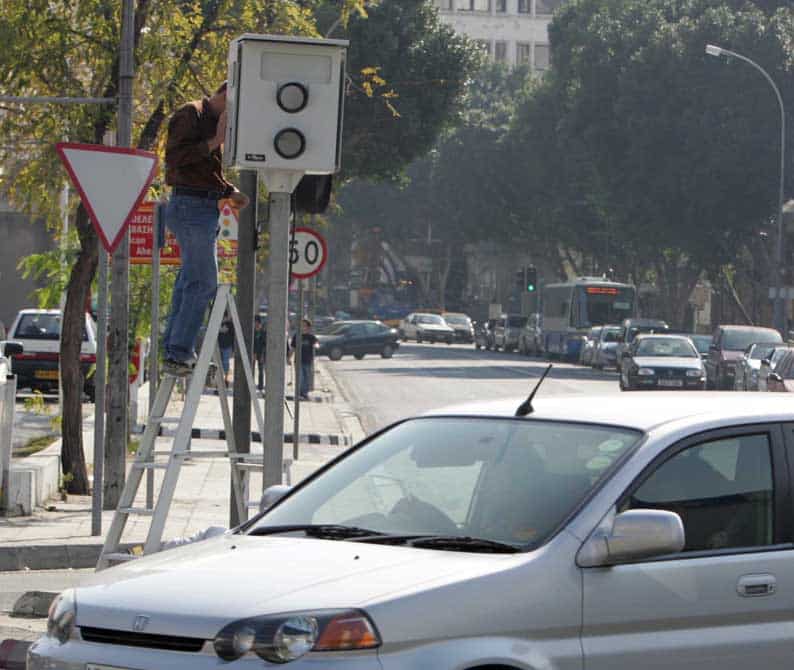 A traffic camera being installed in 2006. They were discarded a year later

Yet another delay over installing traffic cameras is expected after the transport ministry has agreed to choose more sophisticated traffic cameras which photograph vehicles from the front as well as the back, it was reported on Wednesday.

An agreement between police and the electromechanical services department is being sought by the transport ministry so that there are minimal delays to the process.

Last week, police asked the transport ministry to install more sophisticated cameras which as well as recording speed, can also check for other violations such as not wearing a seatbelt, talking on the phone while driving, driving through a red light and crossing the white line at the traffic lights.

These cameras would not be activated however unless the speed limit is broken.

The request by police came after the initial plan by the ministry was to install cameras that only photographed vehicles from behind.

The changes will delay the plans by about a year as the tender process will now need to account for the new, more sophisticated cameras.

In late July, the ministry’s initial plan was to have the tender process completed and the first cameras installed by the first quarter of 2019. The ministry predicts the end of 2019 is now more likely.

In a statement to ‘Politis’, Transport Minister Vassiliki Anastasiadou said the ministry was currently in talks with a company.

“We are waiting on some information in the next few days and if we reply positively to some lingering questions and we receive the green light, then we will proceed with the implementation of the requests made by police,” Anastasiadou said.

She said that drivers would only be penalised for other violations such as not wearing a seatbelt or talking on the phone if they were caught speeding in the first place.

Installing traffic cameras dates back over a decade. After heated debates, mainly focused on personal data protection, a network was set up in 2006 but was quickly discarded. The cameras had numerous problems, including failure to store photographs, and extensive bureaucracy that in some cases resulted in fining a person twice for the same violation while letting others go unpunished.

The cameras were taken down in 2007 and in 2008 it was announced that new cameras would be put up by 2010. In 2011 the Tender Review Board challenged the specifications outlined in the process and cancelled the government’s plan for the fifth time. Failing to find a way of effectively setting up the system, the government decided to outsource the venture to a private firm.

The ministry of finance has decided to fund the 2019 project using a private company and will do so in one-year instalments over five years. The company that is chosen will install the cameras and be responsible for their functionality over those five years. The total cost for the project is expected to be around €45.4 million and it is estimated that around €57 million will be made from fines during that period.