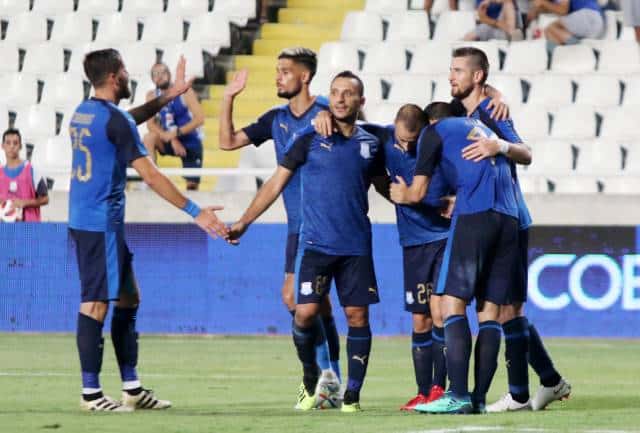 Only Apollon, who take on Belarusian side Dynamo Brest, can be labelled as favourites prior to the first leg ties on Thursday night

The three teams still carrying the Cyprus flag in Europe, Apoel, Apollon and AEK, are up against tougher opposition for the third qualifying round of the Europa League with only Apollon labelled as favourites prior to the first leg ties on Thursday night.

Apollon vs Dynamo Brest
Apollon face a relatively unknown quantity from Belarus in Dynamo Brest and the Limassol side should prove too strong for the Belarusians.

However their press spokesman Fanourios Constantinou was quick to point out that the fact that Dynamo have managed to get through to the third qualifying round shows that they are not a team to be taken lightly.

“We have the quality and the experience to see us through to the final qualifying round but we need a good result in Limassol to do so,” he said.

Dynamo Brest were on the verge of bankruptcy a couple of seasons ago but since then an UAE investor stepped in leading the Belarusian team to two cup triumphs.

They grabbed worldwide attention last July when it was announced that Diego Maradona had signed a three-year contract as chairman of the club.

This will be just the third time that Dynamo Brest will be competing in Europe and the first time they reach this stage.

Hapoel Be’er Sheva vs Apoel
Cyprus champions Apoel got off to a torrid start in Europe this season, getting knocked out of the lucrative Champions League competition in the first qualifying round and suffering a humiliating second leg defeat to Flora Tallin in Estonia.

The onus is on Apoel coach Bruno Baltazar, who has come under fierce criticism for the team’s lacklustre displays especially as the club’s president Prodromos Petrides declared a few days ago that the squad assembled this season is the best in recent years.

Baltazar needs to find a way to plug Apoel’s porous defence that let in five goals in their two away European games. He will also have to address the problem up front, where the champions do not have an out and out striker following the recent transfer of Mikael Pote and the exclusion from the squad of Iranian striker Reza Ghoochannejhad due to political reasons.

Hapoel Be’er Sheva have suffered a poor start to the season as well, crashing out of Champions League qualifying to Dynamo Zagreb who thrashed them 5-0 in Croatia.

Greek goalkeeper Anesti was blamed for the heavy defeat and a couple of days ago the Israelis signed Anorthosis’ former goalkeeper Ariel Arush. However he has not been deemed fit enough and veteran 38 -year-old David Goresh will be Be’er Sheva’s last line of defence.

SK Sturm Graz vs AEK Larnaca
The last of the Cyprus hopefuls, AEK, face Austrian side SK Sturm Graz at the Liebenauer Stadium.

The good news for AEK coach Andoni Iraola is that striker Florian Taulemeusse and defender Daniel Mojsov were both passed fit giving the Spanish coach more options at both ends of the pitch.

AEK spokesman Kyriacos Dimitriou admitted that the Austrians were a far superior team than Dundalk and that a lot more effort and concentration was required to get the result that will allow them to have a chance of progressing when they meet again in a week’s time in Larnaca.

This season SK Sturm Graz are in the process of rebuilding their team. There was a high turnover of players over the summer with the Austrians losing their top scorer of last season Deni Alar amongst others. This has forced their German coach Heiko Vogel to chop and change his team as he searches for his best starting eleven.

Certain to start for the Austrians is Peter Zulj who seems to be behind their every incisive move.

City set the standard for chasing pack in Premier League