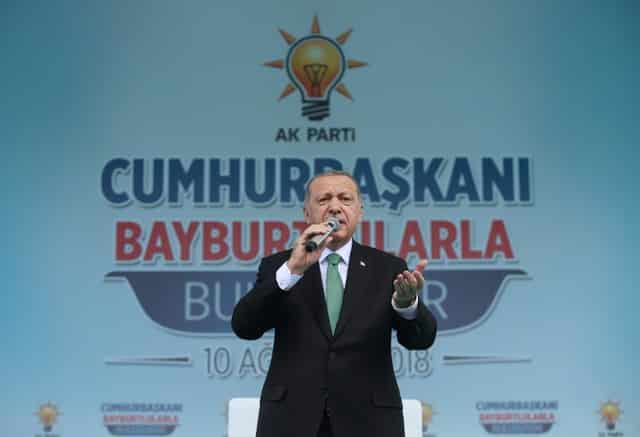 President Tayyip Erdogan told Turks on Friday to sell their gold and dollars to support the crumbling lira, with the currency in free fall as President Donald Trump escalated a feud with Ankara by doubling tariffs on metals imports.

The lira has long been falling on worries about Erdogan’s influence over monetary policy and worsening relations with the United States. That turned into a rout on Friday, with the currency diving as much as 18 percent at one point, the biggest one-day drop since a 2001 financial crisis in Turkey.

The lira, which has lost more than 40 percent this year, hit a new record low after Trump announced he would punish Ankara in a wide-ranging dispute. He said he had authorised higher tariffs on imports from the United States’ NATO ally, imposing duties of 20 percent on aluminium and 50 percent on steel.

The lira, he noted on Twitter, “slides rapidly downward against our very strong Dollar!”

“Our relations with Turkey are not good at this time!” he wrote.

Without naming countries, Erdogan said supporters of a failed military coup two years ago, which Ankara says was organised by a U.S.-based Muslim cleric, were attacking Turkey in new ways since his re-election two months ago.

Although Erdogan struck a defiant tone and warned of “economic war,” his foreign ministry called for diplomacy and dialogue to solve problems with Washington and Trade Minister Ruhsar Pekcan said “we implore President Trump to return to the negotiating table.”

The new duties on Turkey are double the level that Trump imposed in March on steel and aluminium imports from a range of countries. The White House said he had authorised them under Section 232 of U.S. trade law, which allows for tariffs on national security grounds.

FOCUS ON PASTOR While Turkey and the United States are at odds over a host of issues, the most pressing disagreement has been about the fate of American Christian pastor Andrew Brunson, who is on trial on terrorism charges for allegedly supporting a group that Ankara blames for the failed coup. He denies the charges.

Turkish officials held talks in Washington this week but there was no breakthrough.

The Turkish crisis has set off a wave of selling across emerging market assets, reviving the spectre of contagion that has been the sector’s Achilles heel for decades.

The lira sell-off has deepened concern over whether over-indebted Turkish companies will be able to pay back loans taken out in euros and dollars after years of overseas borrowing to fund a construction boom under Erdogan.

His characteristic defiance has further unnerved investors. The president, who says a shadowy “interest rate lobby” and Western credit ratings agencies are attempting to bring down Turkey’s economy, appealed to his countrymen’s patriotism.

“If there is anyone who has dollars or gold under their pillows, they should go exchange it for liras at our banks. This is a national, domestic battle,” he told a crowd in the northeastern city of Bayburt.

“Some countries have engaged in behaviour that protects coup plotters and knows no laws or justice,” he said. “Relations with countries who behave like this have reached a point beyond salvaging.”

Turkey, home to the Incirlik air base which is used by U.S. forces in the Middle East, has been a NATO member since the 1950s. It is host to an X-band radar, a critical part of the Western alliance’s missile defense system again Iran.

Ivo Daalder, a former U.S. ambassador to NATO and now president of the Chicago Council on Global Affairs think tank, said Turkey could grind decision-making at NATO’s headquarters in Brussels to a halt if the dispute with Trump got out of hand.

“Also completely underestimated is Turkey’s capacity to effectively shut down everything that happens in Brussels if they want to, because Brussels works on consensus and nothing, literally nothing happens without consensus,” he said.

Ankara wants the United States to extradite Fethullah Gulen, a Pennsylvania-based cleric who Turkish authorities say masterminded the 2016 coup attempt in which 250 people were killed. Gulen denies the allegation.

Brunson, an evangelical Presbyterian from North Carolina, was jailed for allegedly supporting a group that Turkey blames for the failed coup. His cause resonates with Christian conservative supporters of Trump, who could be influential as Republicans seek to retain control of Congress in midterm elections in November.

Some U.S. officials say Turkey is holding Brunson as a bargaining chip after an executive at Turkey’s state-owned Halkbank was convicted and imprisoned in the United States in May for helping Iran evade U.S. sanctions.

Halkbank has said that all of its transactions were lawful.

Erdogan enjoys the support of many Turks even though food, rent and fuel prices have all surged.

Some economists were unimpressed by the government’s handling of the crisis.

“Confidence needs to be regained. It is obvious how it will be done: since the final decision-maker of all policies in the new regime is the president, the responsibility of regaining confidence is on his shoulders,” said Seyfettin Gursel, a professor at Turkey’s Bahcesehir University.

The turmoil makes it difficult for global investors to justify remaining in Europe and it is also negative for emerging markets, and the lira’s relentless depreciation drives up the cost of imported goods from fuel to food for ordinary Turks, and not only Turks but Turkish Cypriots in the north of the island.

In the north of Cyprus, in Famagusta, a popular roast chicken seller hiked his prices from 15TL to 18TL on Friday, and didn’t rule out a further increase in the coming days.

For some in the north, the currency meltdown has been an unexpected windfall. Thousands of African and Middle Eastern students – subsidized by dollars wired to Turkish banks from family abroad – are suddenly enjoying a lira bonanza.
For foreign tourists, benefits are being found when out shopping or in restaurants – but most car-hire deals, boat trips and other excursions, as wells as many hotel bars, charge in either euros or sterling.
The crossing point at Ayios Nikolaos has a long queue back into the Republic, past SBA customs, as many locals from the east took advantage of the crisis to go shopping at the huge Lemar hypermarket.