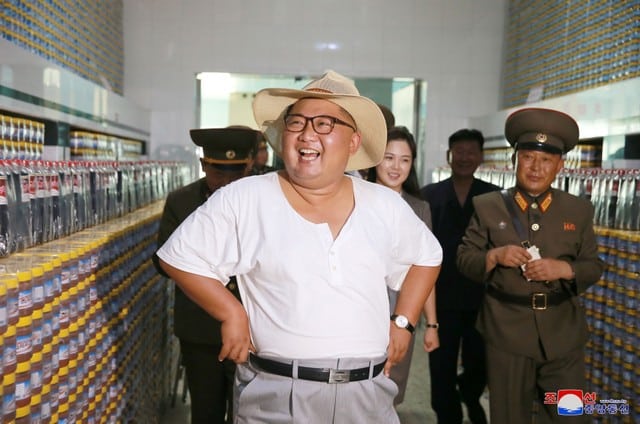 North Korea denounced U.S. calls for enforcing international sanctions despite its goodwill moves and said progress on denuclearization promises could not be expected if Washington followed an “outdated acting script.”

North Korea’s foreign ministry said Pyongyang had stopped nuclear and missile tests, dismantled a nuclear test ground and returned the remains of some U.S. soldiers killed in the 1950-53 Korean War.

Yet Washington was still insisting on “denuclearization first” and had “responded to our expectation by inciting international sanctions and pressure” it said.

“As long as the U.S. denies even the basic decorum for its dialogue partner and clings to the outdated acting script which the previous administrations have all tried and failed, one cannot expect any progress in the implementation of the DPRK-U.S. joint statement including the denuclearization,” the ministry said.

The statement on the KCNA state news agency said North Korea, which calls itself the Democratic People’s Republic of Korea, was still willing to implement a broad agreement made at a landmark June 12 summit between U.S. President Donald Trump and North Korean leader Kim Jong Un.

But it accused unidentified high-level U.S. officials of “going against the intention of President Trump” by “making baseless allegations against us and making desperate attempts at intensifying the international sanctions and pressure.”

It said “expecting any result, while insulting the dialogue partner” was “a foolish act that amounts to waiting to see a boiled egg hatch out.”

The White House did not respond to requests for comment.

Kim vowed in Singapore to work towards denuclearization but the two sides have yet to define a deal to meet that goal and Washington insists sanctions pressure must be maintained during negotiations.

The North Korean statement followed comments this week by top American diplomats stressing the need for Pyongyang to take additional steps toward denuclearization and contentious remarks last week by U.S. Secretary of State Mike Pompeo and North Korean Foreign Minster Ri Yong Ho on the sidelines of a regional summit in Singapore.

Trump’s national security adviser, John Bolton, said this week that Pyongyang had not taken the necessary steps to denuclearize while U.S. Ambassador to the United Nations Nikki Haley said Washington was “not willing to wait for too long.”

Bolton, who spoke on Tuesday, said Trump, in a letter to Kim, proposed sending Pompeo back to North Korea, and that Trump was ready to meet with Kim any time.

State Department spokeswoman Heather Nauert told a regular briefing on Thursday that the United States was in touch with North Korea virtually every day or other day but had no travel plans to announce for the moment.

Ri traveled this week to Iran, where President Hassan Rouhani told him the United States cannot be trusted after the Trump administration reneged on a 2015 deal to lift sanctions in return for curbs on Iran’s own nuclear program.

U.S. officials have declined to comment on a report on the Vox news website on Wednesday saying that North Korea had repeatedly rejected a U.S. proposal for it to cut its nuclear arsenal by 60 to 70 per cent within six to eight months.

U.S. officials familiar with the talks, however, told Reuters that North Korea had yet to agree to a timeline for eliminating its nuclear arsenal or to disclose its size, which U.S. estimates have put at between 30 and 60 warheads.

They said it had also not agreed to definitions of the key terms of any agreement, or to any inspection of its nuclear test site, which it claims to have decommissioned, but which U.S. intelligence officials have said may still be operable.

Two U.S. officials said North Korea appeared to view Trump as a softer touch. They said that when a session with Pompeo reached an impasse last month, North Korean officials asked if he would like to step outside to call the president, who declared after the June summit that North Korea was “no longer a nuclear threat.”

Our View: State’s plan for ‘a little privatisation’ of Cyta is doomed to fail