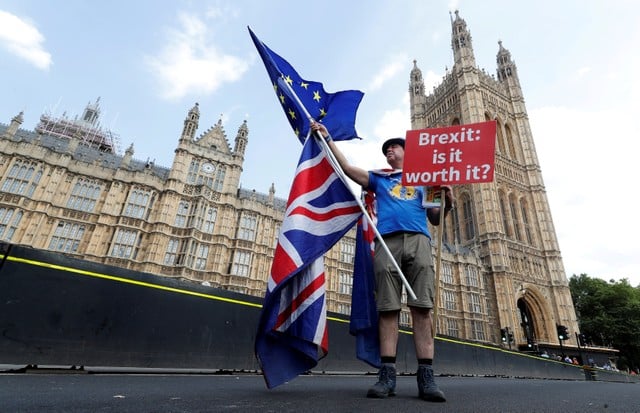 A man holds an anti-Brexit banner on Westminster Bridge, in central London

If Brexit talks break down without a deal, half of Britons believe the final decision over whether to leave the European Union should be taken by the public in a referendum, according to a survey of more than 10,000 people published on Friday.

The YouGov poll, conducted July 31-Aug 7 and commissioned by the pro-referendum “People’s Vote” campaign, found 45 per cent of voters supported holding a referendum on completion of the negotiations whatever the outcome, while 34 per cent opposed it.

“Across the spectrum, the message from voters in this survey is clear: if the government and parliament can’t sort out Brexit, the people should,” said Peter Kellner, former president of YouGov.

With less than eight months until Britain is due to leave the EU, Prime Minister Theresa May has yet to find a proposal to maintain economic ties with the bloc that pleases both sides of her divided party and is acceptable to negotiators in Brussels.

She has proposed a compromise that would keep Britain in a free trade zone with the EU for manufactured and agricultural goods, which would still have to comply with some EU rules. Some in her party want closer ties; others favour a cleaner break.

At the weekend, British trade minister Liam Fox said he saw a 60 per cent chance of a “no-deal”Brexit, which would see the world’s fifth-largest economy quit the EU on March 29, 2019 without a trade agreement.

Sterling slid to its lowest level in more than a year on Friday, bringing its loss since Monday to 1.9 per cent, on concerns Britain could leave the EU without a deal.

May’s minority government faces a series of make-or-break moments in the Brexit process over coming months. London and Brussels seek a final deal in October to give time to ratify it.

May has repeatedly ruled out holding another public vote on Brexit, saying the public spoke at a June 23, 2016, referendum, in which 51.9 per cent of the votes cast backed leaving the EU while 48.1 per cent backed staying.

Goldman Sachs said it believed May would clinch a deal on access to EU markets for goods and get it passed by parliament, though a disorderly exit remained possible.

The YouGov poll found 74 per cent of those questioned believed the negotiations were going badly, and 68 percent thought that made it likely Britain would get a bad deal.

From the UK decks to ours

UK’s Raab: We must ‘unlock’ the Northern Ireland protocol