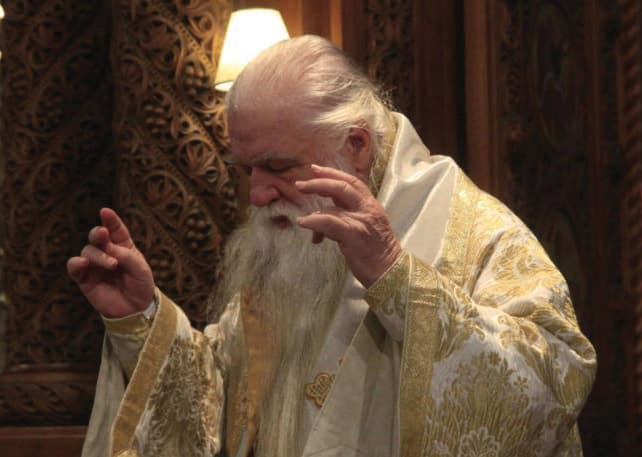 A big uproar – not only among intellectuals, but also among ordinary people – greeted the comment by the Greek bishop that the recent killer fires in Greece were an act of God because Prime Minister Alexis Tsipras and his staff were atheists. “With their atheism they provoke the wrath of God,” said the Bishop of Eyialias, Ambrosios.

Let us examine the issue from its philosophical aspect. In a democratic country, the principle of freedom of thought is fundamental. A person is free when they act according to their judgement, namely, with the consent of their intellect and not His intellect. This is why it is difficult, if not impossible, for two people to agree on everything. The Latin saying “quot homines, tot sententiae”, which translates to “as many opinions as people” is appropriate here.

We should therefore not find it strange that millions, if not billions, of people all over the world (among them Alexis Tsipras) are not convinced of the existence of a supernatural being that intervenes in private lives. They are atheists or agnostics – they believe in something only if there is scientific proof and we should respect their worldview.

Some very important questions are raised by Bishop Ambrosios’ claim and those on his side because there seem to be two schools of thought in the Orthodox Church. The first, with which we are all familiar, presents God as the supervisor of selfless love and forgives all sins without any conditions. On the website of the Church of Greece (www.psyche.gr/amartia.htm) we read that “We cannot escape the Love of God… the space of the distance caused by sin is covered by excess of the Love of God.” Therefore, according to this school, there is no case for putting any blame on the atheist Tsipras.

The other school, embraced by Ambrosios and other bishops, has a diametrically opposed view. It presents God as an avenger-murderer in the style of Hitler or Saddam Hussein, shocking open-minded people. Bishop Ambrosios wrote in his blog: “We will try to give an answer to the question: why all these terrible things are happening? We seek the light of the Holy Spirit and Holy Bible in search of an answer.” According to the Holy Bible, in times of “apostasy” from the path of God, the wrath of God would be displayed through a variety of disastrous happenings, such as earthquakes, hunger, pestilence, diseases, plagues, bloodshed, criminality and catastrophic fires.

If this is the God that some bishops want to present us, why does he not punish Tsipras and his associates instead of burning innocent people including children and babies? What rational being could perceive the indiscriminate extermination of people as justice? Referring to the Holy Bible, Ambrosios had in mind the flood and Noah’s Ark as well as the destruction of Sodom and Gomorrah.

This is why the challenge to educated Christians that adopt a measured and balanced approach is so important. As in the middle of the 19th century, these Christians, faced with the overwhelming evidence surrounding the evolution of the species, disputed the law of Creation and the narrative of Adam and Eve, are being asked to consider the two above-mentioned catastrophes.

Is it possible for a God, whose love is limitless, to drown the whole world (apart from Noah and his family) in a flood, after a downpour that lasted 40 days and nights? This disaster is estimated to have taken place more than 6,000 years ago and the population of the earth drowned for their sins was about 30 to 40 million. Were there not millions of babies and innocent children among them who drowned in this shocking way? And could a compassionate God have completely destroyed two large towns because their citizens were depraved? The way that God destroyed these towns, according to the Old Testament, with fire and sulphur from the skies, shocks as it is more nightmarish than the chemical weapons used by Saddam in the war against Iran.

As was expected, many personalities, organisations and ordinary people denounced Ambrosios and his like. But all of us who are protesting about the brutal, anti-Christian, fascist, misanthropic, savage sentiments of Ambrosios are not dealing with the real issue. As long as there are chapters in the Old Testament referring to the flood and to Sodom and Gomorrah, it is inevitable they will give rise, in perpetuity, to Ambrosios and other Hitler-like bishops. Only if their eco-system is destroyed will the hatred they disseminate dry up.

And this can only be done by action from clergy who are inspired by humanism and believe in a kind and compassionate God and not a God comparable to Hitler and Saddam Hussein. It is up to them to re-appraise the messages of some of the chapters of the Old Testament. Otherwise, the word of God will carry on fighting it out with His acts.