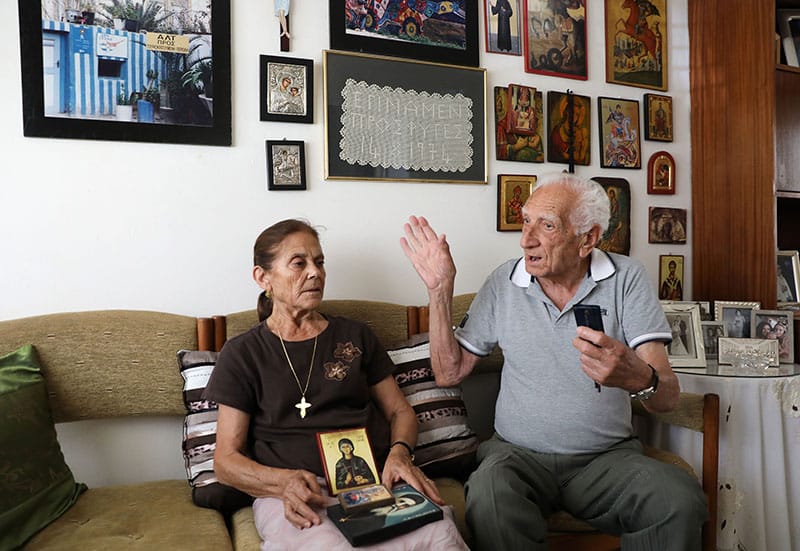 Andreas and Demetra Christodoulou in their Strovolos III home

A few clothes, sheets and a blanket for the parents, kids and grandparents were all that the suitcase could hold. Meanwhile Katia put her school PE kit in a plastic bag. The suitcase, the plastic bag and the keys were all the family took with them as they left the village of Palekithro in Nicosia district on August 14, 1974.

This coming Wednesday marks 44 years since the start of the second phase of the Turkish invasion and was the day that many Greek Cypriot refugees fled, including Katia with her two brothers and parents Demetra and Andreas Christodoulou, who ended up in the Strovolos III refugee estate, where they still live.

The day before the second phase of the invasion, Katia, her brothers and some other children took water, watermelon and halloumi to the Greek Cypriot soldiers outside the village. One of them, who had parked his car in their yard, gave her the key and told the family to take the car and leave as the Turks would advance and the soldiers would be moved from the area.

“We could not sleep that night. There were cars coming and going, there were people outside talking. We decided to leave,” Katia’s mother Demetra said. The family took their tractor with a carriage on the back for the children and set off, at which point the village priest asked where they were going. “Wherever fate takes us,” Demetra said.

Speaking to the Cyprus News Agency, Andreas remembers the long train of cars leaving the village. They travelled to Strongilos, then Ashia and headed to Xylotymbou in the British Bases areas, for safety.

Andreas said the worst part of their flight was that the Civil Defence issued no guidelines. “People were doing whatever they thought was best. Others left, others stayed behind and could not escape. Whoever took the road to the Tympou airport was arrested by the Turkish army. The only empty road was the new road to Varosi,” he said.

Demetra remembers the fighter jets flying over them. The Turks did not bomb however, as they wanted people to simply leave the villages. As the family was leaving she turned back to look at the village: “The land was on fire. All crops were on fire. There was a thick veil of black smoke… you would think the village was on fire, but it was the crops.”

On August 15, the family now in Xylotymbou went to church to celebrate the Assumption of the Virgin Mary. “There were many like us… there was a man from the Famagusta villages. He brought mattresses.

When people asked him where he would put all those mattresses, he replied ‘don’t you know we will stay here for good, there’s no going back.’ We thought he was kidding. It was an unreal situation, like we were in a movie”.

A week before the family left Palekithro Demetra gathered their most valuable possessions: two sets of cutlery, silverware, earrings, a cross and a pendant of the Virgin Mary. She and her husband put them in a metal container, dug a hole, put a garden hose inside and buried it under the lemon tree at the side of the house. “We thought, if we get to live, we will see them again”. And they did, 29 years later.

Katia, a photographer by profession, often visited the north and went to the family home. Emine and Yuksel, two Turkish Cypriots who now live in their home, would always tell Katia to ask her mother to visit. “All my relatives visited the house and everyone told me that Emine wanted me to visit. However, I didn’t feel like visiting,” Demetra said.

Eventually, the family decided to cross to the north. “They came out, hugged me and I entered the yard and stood under the lemon tree where we had buried the treasure,” Demetra said. Emine’s daughter asked Katia in English if I was looking for something. She said yes. “Then the girls went inside the house and soon came out with the treasure. I fainted. Everything happened so fast.”

Demetra recalls that Emine and Yuksel found the treasure and hid it inside the wall.

Returning home the family was stopped at the checkpoint and ordered to open the trunk. There, Katia said “you will find what we left and was returned to us”.

She, however, is from Kontemenos, which was bombed during the first phase of the invasion. “We were hiding in the holes that were dug by a neighbour who was planning to build his daughter a house. Me, my mum and dad and my two small children.

With their grandparents, the family stayed in Kontemenos until August 6. They then moved to Ayios Georgios Monastery in the Morphou district before staying in a cave in Kapouti until the August 14 bombings were over. They then headed to Kakopetria from where her father wanted to go and check on the animals. “We didn’t let him. If we did, then he would have been dead just like him and we would be looking everywhere to find him,” Nitsa said pointing at the picture of her missing brother, Nicholas, aged 19 at the time.

The young soldier was one of the commandoes that went to Bellapais. He was never found.
When she visited Kontemenos, the soldiers who now occupy Nitsa’s home did not allow her to even cross the road to approach the house. “I don’t want to go back again, it’s just miserable, it’s just grey”, she said.

No payment of transfer fees for registration of immovable property