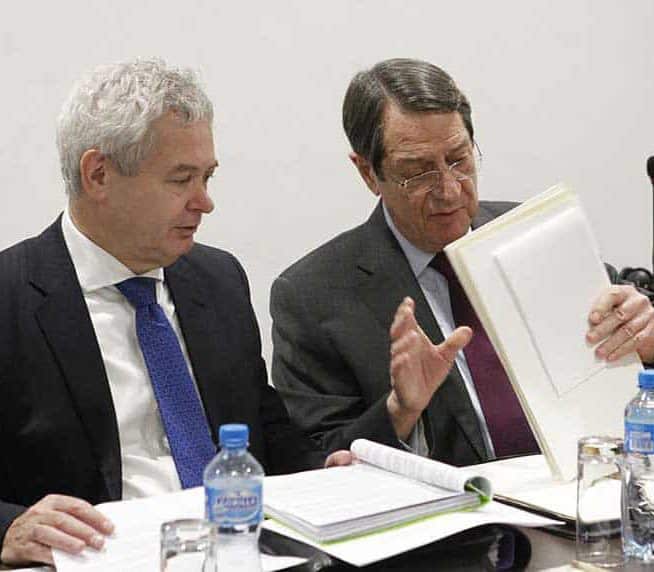 Greek Cypriots “cannot live in the illusion” that the status quo will bring peace and stability, chief negotiator Andreas Mavroyiannis has said, warning that if the current talks’ effort fails, “we will find ourselves empty-handed in front of a steamroller”.

“That is why we need to manage the signs of an extremely worrying situation that could destabilise us,” he added.

Mavroyiannis made the comments in an interview with Phileleftheros published on Sunday. He gave a similar interview to Alithia.

“Without a lasting critical judgement and clear analysis, how can we cope with the difficulties that appear before us?” he added.

Mavroyiannis reiterated comments he made recently that the current situation as regards Cyprus talks marks the end of an era in terms of it being the last chance for a solution based on a bicommunal, bizonal federation.

“The features that formed this kind of solution are fading,” he said.

Mavroyiannis said the Greek Cypriot side needed to be realistic.

He said problems cannot be avoided by ignoring them and that realistic analysis and the correct perception were the basis for appropriate action. Even though the understood federal form of a solution reached within UN parameters with the axing of guarantees, withdrawal of Turkish troops and the restoration of human rights in a modern European state, with full sovereignty and territorial integrity was still the goal, and this had not been exhausted yet as a possibility, “on the other hand, there are other scenarios that are of great concern,” he said.

Mavroyiannis explained he was referring to the shifting international political scene and changes in multilateral diplomacy.

“If the negotiations format is erased and the present effort fails, we will be left empty-handed in front of a steamroller,” he said. “So let us take care to preserve our prospects.”

Reminded that Cyprus talks have on many occasions been presented as “the last chance” but always came back around, Mavroyiannnis said this approach today would be an absurd road to take.

“Today this approach is synonymous with irresponsibility when faced with the dangers of tomorrow,” he said.

Commenting on the recent visit by UN envoy Jane Holl Lute who was on the island last month to assess prospects for new talks and whether she had a plan B, Mavroyiannis said there was no such issue and that Lute’s role was “clinical”.

“She did not suggest anything at all. She gave a strong signal that it is up to all parties to be able to convince the secretary-general that they have an approach that can work,” he said.

“We would of course like the secretary-general and Mrs Lute not to confine themselves to a clinical diagnosis but to contribute in a catalytic way and if necessary to help bring to fruition the conditions for pursuing the solution.”

Asked whether a confederation of two states rather than a federation might ever be on the table, Mavroyiannis said if it was proved to be feasible and desirable and acceptable to everyone, possibly but “under no circumstances is such a scenario ours or a suggestion of ours.”

“The President of the Republic has rejected any idea of such scenarios and reiterated the commitment of our side to the parameters of the Security Council on the form of the solution based on the decisions of the National Council and its joint declaration February 2014, in a very clear and unequivocal manner,” he said, adding that all two-state notions had been coming from the Turkish side.

Mavroyiannis said the Greek Cypriot side had made some suggestions to Lute on where they thought things went wrong when talks failed at Crans Montana last year, that if corrected would offer a way forward. He rejected “artificial timetables” but said if things picked up where they left off, it should not take long. He put down the failure to lack of preparation.

Commenting on the possibility of the two leaders meeting with UN chief Antonio Guterres on the sidelines of the UN General Assembly in New York next month, Mavroyiannis said that would be a “natural landmark” date but it would be down to Lute’s report due earlier in the month.

On Turkey’s plans to drill in the region as a counter to plans by the Republic in the Autumn, Mavroyiannis said any such actions or violations of Cyprus’s EEZ would certainly be a source of tension that Cyprus could not let pass.

“With full awareness and sense of responsibility and with measures, we will try not to let things derail. But at the same time, we have to safeguard our interests,” he said.