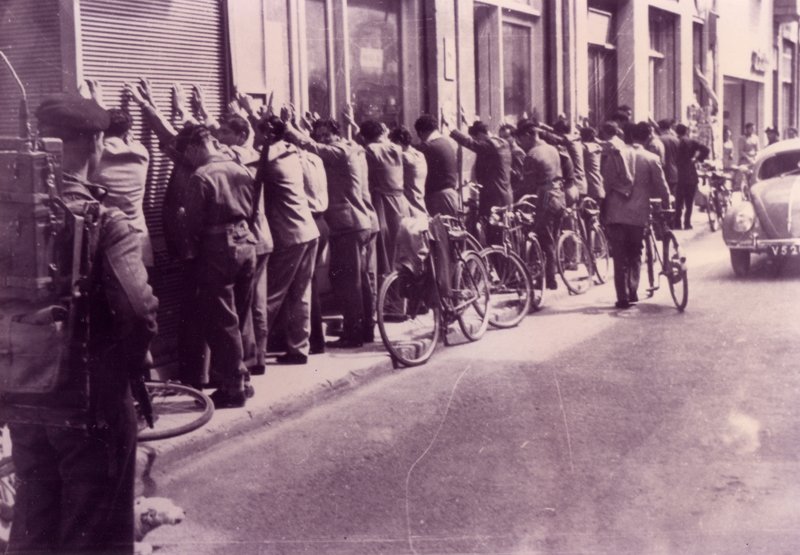 British soldiers searching for Eoka suspects in the 1950s

British government lawyers have written to UK veterans who served in Cyprus during the Eoka struggle against colonial rule in the 1950s asking them for recollections of their service on the island and whether they had observed any wrongdoing by army personnel.

A report in the Daily Express said the move was part of the ongoing case brought by 33 Eoka veterans against the British government over torture they said they endured between 1955 and 1959 when they were minors.

According to the British tabloid, former Royal Signals Regimental Sergeant Major Sam Bedwell reportedly received a letter asking whether he had witnessed ‘anything untoward’ during his service in Cyprus.

Bedwell, 83, said he had not seen any such behaviour and slammed the ‘nonsense’ of the courtcase.

Bedwell told the Express he had only seen “exemplary” behaviour from British troops under what he called “very trying circumstances”.

Julian Lewis, the chairman of the House of Commons defence committee, told the paper it was “outrageous” for officials to go on “fishing expeditions” so long after the conflict.

Other veterans also slammed the latest investigation saying they had been fighting a “ruthless enemy” and were “doing their duty”, the Express said.

One document lodged at the High Court earlier, it said, claimed that British colonial forces had raped a 15-year-old girl and tortured civilian detainees with beatings and mock hangings.

But MP Bambos Charalambos, a member of the Commons justice committee, said the British government should admit responsibility to avoid a needless and embarrassing battle in court.

“Rape is rape and torture is torture. It doesn’t matter how long ago it occurred; anyone who commits these abhorrent acts should always be looking over their shoulder,” said the MP for Enfield Southgate. “The idea that the truth should not out because of the passing of time is ridiculous.”

He said one of his constituents, Christos Constantinou, is among the claimants in this case.

“His truth is undeniable. He was beaten so badly by two British army captains that they were court marshalled and dismissed from service.”

One of them is still alive and should come forward and tell his story, the MP said.

Foreign Office documents released in July 2012 described claims of torture and abuse during the Eoka struggle, which opened the way for the lawsuits filed by the 31 men and two women.

The Eoka veterans filed their claim in mid-2015 after the Foreign Office documents described claims of torture and abuse. The British government denies any wrongdoing.

The plaintiffs say they have eyewitnesses, declassified documents, newspaper reports and medical evidence. The arguments of the Cypriot claimants are also expecting a boost from International Red Cross archives.

In parallel with legal procedures to lead test cases to trial, the solicitors were expected to open negotiations with British authorities with a view to settling out of court on a similar basis to the Kenyan example, which opened the way for the Eoka veterans.

An official admission in Britain in 2013 that thousands were tortured during Kenya’s Mau Mau insurgency between 1952 and 1963 expressed regret, but denied liability and settled out of court for a reported €24 million.

According to the Express, Britain has already paid tens of millions of pounds to Afghan and Iraqi civilians after claims resulting from the more recent conflicts in the Middle East.