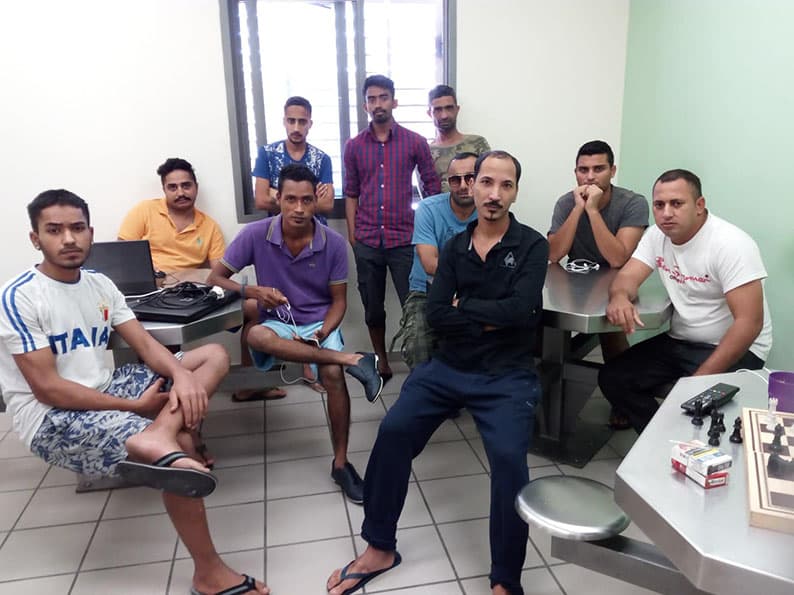 Some of those on hunger strike at Menoyia. John Dhull in white t-shirt on the far right of the photo

The father of a baby who had a life-saving operation in Israel in 2013 after the minister of health stepped in, is one of 19 detainees on hunger strike at the Menoyia detention centre to protest the lack of movement on their individual cases.

Speaking from the facility, John (Sanjeev) Dhull, 36, from India told the Cyprus Mail that the refugees, asylum seekers and immigrants in Menoyia’s Block A decided to stop eating as of Monday morning, only taking liquids to try to highlight their frustration at their lengthy detention.

“We are never told how long we will be kept in here or what is going on at all. I have an appeal court date for October, I have a work permit and a job and my family needs me, and they still don’t let me out,” he said.

Dhull has been held for almost a month since his arrest in July, when he visited immigration at their request to collect a letter. On July 20 he was moved to Menoyia in Larnaca where he remains.

He said fellow detainees are from all over the world including Iran, Pakistan, India, Africa, Asia and Arabic countries. “Many of these people, unlike me, have applied for asylum and they don’t know why they were arrested and kept here as no decision has been made on their cases,” he said.

Dhull said that some people arrive and are released within a week and others are kept waiting for months on end.

Menoyia is used to facilitate immigrants ahead of their deportation or until the Civil Registry and Migration Department process their application for refugee status or grant them asylum.
However, many of these cases are complex and the department often takes a long time to reach a decision. Hunger strikes, protests, and even suicide attempts have all previously occurred, which led to the ministry of the interior trying to speed up the application process.

Dhull’s wife Virginia said: “I am very upset he is on hunger strike, health is important and Zoe often cries asking where her Daddy is as she can’t find him. We need him at home with us.”

The Cyprus Mail was unable to contact the ministry of the interior for further comment, probably due to the summer break.

The family hit the headlines when Zoe, now 5, who was born in Paphos general hospital on June 25, 2013, was diagnosed with a heart defect shortly after her birth, which had gone undetected during pregnancy.

She was rushed to the Makarios Hospital and her parents had less than two weeks to raise the €15,000 needed to pay for a vital cardiac catheterisation in Israel as the operation could not be done in Cyprus.

They had no private medical insurance and were unable to obtain a state medical card as their visas had expired. The health ministry stepped in and offered to pay the costs, and at just three weeks old Zoe underwent the life-saving operation at the Schneider Children’s Medical Centre in Israel. The family said they were extremely grateful for this act.

Nicosia-based lawyer, Maria Serghi Mirbagheri was only engaged by the couple last month, as they had been unable to contact their previous lawyer for some time. She said: “It is sad in today’s society that someone has to resort to such extreme measures to be listened too.”

She added that she was waiting for a response from the office of Leda Koursoumba, and a request to put the family unit first on humanitarian grounds by granting Dhull an extension. The welfare of the child must come first, she stressed.

The ministry of the Interior previously listed the couple’s immigration history, noting that they both remained in Cyprus illegally after their visas had run out – before Zoe was born – and that Dhull was given a ‘final residence permit’ which expired on 3/10/17. The ministry said this ‘cancels out any requests filed by him, his wife or daughter’, despite him having a work permit valid until October 2018.

However, Dhull’s lawyer said she was not disputing these points and noted that subsequent permissions to stay had been granted on humanitarian grounds, adding that although Dhull was given a letter by immigration to leave Cyprus, it also includes the right to appeal the decision, which is what he is doing.