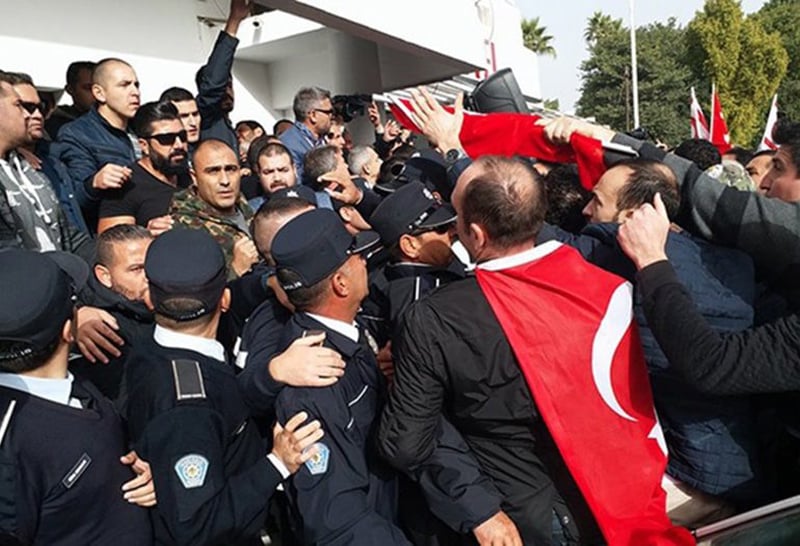 Demonstrators outside the Afrika offices

Sener Levent and the Turkish Cypriot publishing company Afrika have filed a lawsuit against Turkish President Tayyip Erdogan, for instigating attacks on the newspaper on January 22, 2018, according to Afrika’s front page on Saturday.

The front page led with the title “We have taken Tayyip Erdogan to court”, and showed images of the suits filed to the ‘district court’ in the north.

Afrika’s front page also included images of the protestors outside their offices on January 22, showing people making the symbol of the Turkish ultranationalist movement ‘Grey Wolves’ and the symbol of the ‘Rabia’, a gesture used to show support for the Muslim brotherhood.

This is the first time a Turkish Cypriot media group is suing a Turkish politician, which follows a case opened against the newspaper in Ankara for the first time, regarding Afrika’s January 21 front page which ran with the title “Yet another invasion by Turkey”, in relation to the Turkish military operation in Syria’s Afrin.

The newspaper wrote in their story that in the town of Bursa on January 21 at an AKP women’s party conference, Erdogan had called the paper “lousy” and said they had ran with an unethical title that day.  He called on “his brothers” in the north to take a stand, the newspaper said.

“They say that the Turkish army, after Cyprus, has conducted a new invasion.  How unethical, how obscene is that,” Erdogan said then.

The article says that after that speech by Erdogan, on January 22, “fanatics” attacked the newspaper with rocks and crowbars attempting to lynch the staff.

“I am your accuser…you are the accused my sir…you are a defendant in Cyprus…You will be called to give answer! You are guilty! You have committed a big crime! You are the instigator!  You instigated them to lynch us, to murder us! Do you see that ruthless, raging mob?  Do you see the man holding the large rock in his hand,” was the lead of the article by Sener Levent in Afrika on Saturday.

Regarding the suit against Levent in Ankara, the newspaper’s head said: “You filed a suit against me in Ankara…I accept it…Now it’s your turn to come to our courts…I would come to your courts…If a court existed.”

Levent added that the issue will not remain only with the council, and that the case will move forward “otherwise this island [Cyprus] will not forgive us.”

Bolt lands Down Under for ‘real’ soccer mission