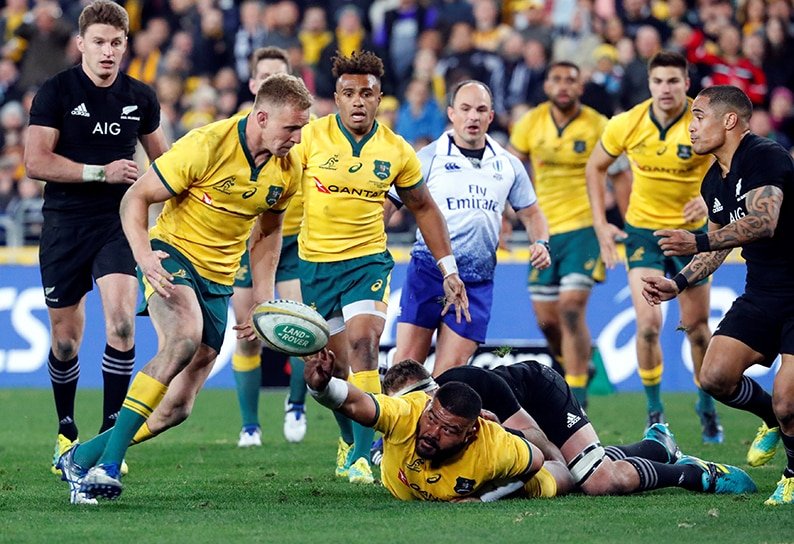 WINGER Waisake Naholo scored a brace of tries and Beauden Barrett enjoyed a stellar return to form as the All Blacks steamrolled the Wallabies 38-13 in the Rugby Championship opener in Sydney on Saturday.

Trailing 6-5 at the break due to some dogged Wallabies defence, the All Blacks notched a record second half points tally against Australia in a six-try masterclass of ruthless, running rugby at Olympic stadium.

Naholo played a huge part in the All Blacks’ 13th successive win in the southern hemisphere tournament, grabbing a late pair of tries in two minutes as veteran lock Sam Whitelock celebrated a joyous 100th test.

The Fijian-born winger also sparked their second half blitz by setting up their second try through Jack Goodhue before putting Wallabies fullback Israel Folau out of the game with a mid-air clash near the hour-mark.

Aaron Smith grabbed the All Blacks’ first try late in the first half, with Barrett and Brodie Retallick also crossing after the break to bruise the Wallabies’ confidence for a third successive RugbyChampionship opener in Sydney.

The match also doubled as the first in the Bledisloe Cup, the annual series contested between the nations.

The All Blacks have held the Cup since 2003 and the Wallabies will need to beat them at their Eden Park stronghold next week for the first time in 32 years to keep the series alive.

“You come to Sydney and you expect an explosion and we sort of got a different type of an explosion this time,” All Blacks coach Steve Hansen said.

“We haven’t done anything tonight other than get the right to put one hand on the (Bledisloe) Cup and we’ve got to go back next week, work hard and earn the right to put the other hand on it.”

The Wallabies battled hard in the opening period, but their set pieces were a mess throughout and they were quick to buckle when put under pressure in the second half, gifting the All Blacks tries with a slew of turnovers.

Debutant back Jack Maddocks scored their sole try in the 66th minute but the match was all but decided.

World Player of the Year Barrett came in with queries over his form after a subdued finish to the Super Rugby season with the Wellington Hurricanes. But he responded with a masterful display only tempered by some errant kicking.

He manufactured the All Blacks’ third try in the 51st minute with typical enterprise.

Swooping on a handling error by winger Dane Haylett-Petty at midfield, Barrett toed the ball forward three times in an exhilarating sprint before collecting it a metre from the line and diving over to put his side 17-6 up.

The wheels then fell off for the Wallabies, with Folau limping off ten minutes later, having rolled his left ankle after landing from an aerial clash with Naholo.

Lock Brodie Retallick capitalised on the Wallabies’ disarray, thundering over for the All Blacks’ fourth try.

Naholo had earlier done the damage deep in defence, stripping the ball off fellow Fiji-born winger Marika Koroibete two minutes into the second half.

The tackle allowed the All Blacks to switch the ball wide and then quickly downfield to give outside centre Goodhue his maiden try.

The Wallabies came into the match with some optimism but will head to Eden Park with renewed doubts a year out from the World Cup.

“There’s no lying down,” said a deflated Wallabies coach Michael Cheika. “We’ve got to improve on what we brought today and go out there with the attitude that we’re going to win.”

Lesbians and gays support the miners!