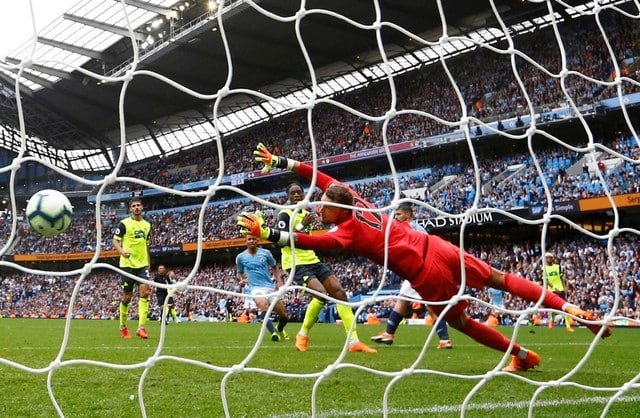 The prolific Argentine scored on 25, 35 and 75 minutes, also hitting the post in a devastating display to which the visitors, who last season were the only side to stop City scoring in the league at home, had no answer.

Gabriel Jesus also netted, along with David Silva on his 250th league appearance for City, with the rout completed by a Terence Kongolo own goal late on after excellent work from substitute Leroy Sane.

“I am happy,” said man-of-the-match Aguero, who was about to be replaced when he scored his third.

“I was a little bit tired. I try two or three times to get the third goal.”

For once, Pep Guardiola chose to pair Aguero with Jesus up front and such were the array of City attacking options that Huddersfield were simply pulled apart.

After the visitors rode their luck for 25 minutes, City keeper Ederson found Aguero with a perfect through ball and the Argentine kept his cool to finish cleverly.

Jesus was next on the scoresheet after exchanging passes with Benjamin Mendy and firing past Ben Hamer, who then fumbled a cross to gift Aguero his second and City’s third in a blistering 10-minute spell before halftime.

Although Jon Stankovic pulled a goal back before the interval, there was no respite as Silva produced a perfect free kick to cap an impressive display in front of his watching wife and child.

Aguero flicked home his third on 75 minutes and Kongolo put through his own net late on — the ninth goal Huddersfield have conceded in two games.

Second half strikes from skipper Troy Deeney and Will Hughes gave Watford an impressive 3-1 win at Burnley in the Premier League on Sunday.

Former Burnley forward Andre Gray opened the scoring in the third minute with a superbly taken volley from a fine Deeney cross from the right flank.

Three minutes later, though, Burnley got back on level terms when James Tarkowski rose well at the back post to head in a Johann Berg Gudmundsson corner.

After an evenly balanced and entertaining first half, Watford hit Burnley, who have now gone seven league games without a win, twice after the break.

Deeney drove home in the 48th minute after being found in the box by Abdoulaye Doucoure then a terrible giveaway by Burnley defender Matt Lowton to Will Hughes resulted in the Watford midfielder firing past Joe Hart with a brilliant left-foot strike.