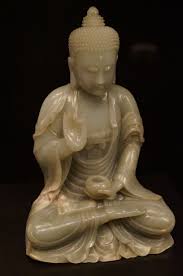 China’s official Xinhua news agency said experts believe many of the items recovered are of “tremendous historical value” as they show cultural interactions between the East and the West during the early days of the Tang Dynasty, which lasted from 619-907 A.D.

The suspects are said to have illegally excavated items from the Dulan tombs, which lie along the ancient Silk Road, and subsequently arranged their sale.

Several of the arrests were made in provinces further east following an investigation that began in 2017, the ministry said.

A police official speaking on China’s state-run CCTV on Sunday said the criminals, two of whom were on the police’s “most wanted” list, were asking for as much as 80 million yuan ($11.6 million) for their loot.

Of the 646 items recovered, 16 were classed as first-class cultural relics, according to a ministry statement.

Partial excavations of the Dulan tombs have revealed a valuable collection of ancient silk textiles and garments, including from Central Asia and Byzantium, according to the New York-based World Monuments Fund.