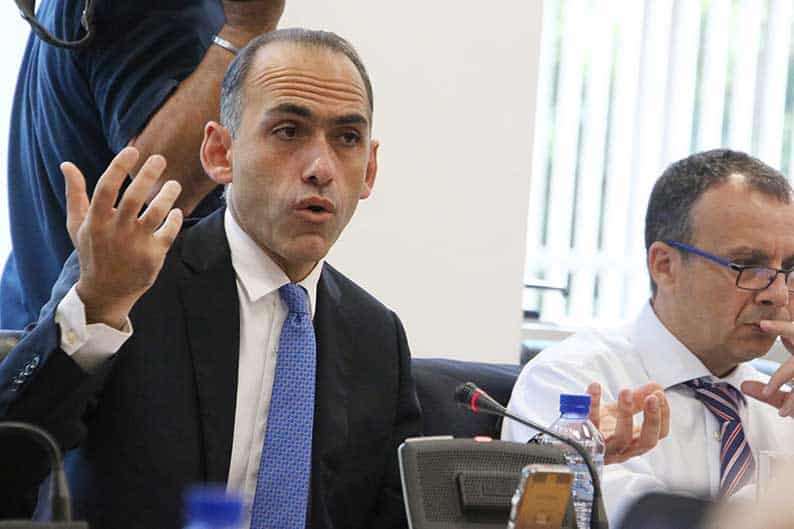 FOLLOWING a prolonged fiscal slippage, Finance Minister Harris Georgiades became a valuable asset for the government in the months and years after the chaotic bailout of 2013 as Cyprus struggled to restore its severely damaged credibility.

Now, five years after he took office, the economy is growing at the highest rate in a decade and has produced surpluses. While any other finance minister would be now basking in the sun, Georgiades may be about to battle for his political survival.

Amidst the failure of the Cyprus Co-operative Bank, damning Audit Office reports and now witness testimonies, Georgiades is generally considered responsible for promoting a culture of favouritism and nepotism at the Co-op, or at the very least failing to prevent it. Even if the committee probing the breakdown of the Co-op, ultimately exonerates him of being legally responsible, the minister may end up a political liability.

The above conclusion is the result of interviews taken from three persons familiar with the economy, banking and politics who all spoke on condition of anonymity with one citing fears of retribution. None of the interviewees held a position in the Co-op at any time and have therefore not been invited to testify to the committee set up by the attorney-general or are expected to be summoned.

One of the three, a prominent economist, said that the committee will most likely fail to prove that the minister had directly intervened at any time in the state-owned Cyprus Co-operative Bank, especially in favour of his childhood friend Nicholas Hadjiyiannis.

A middle-management finance ministry official who served as the liaison between the ministry and the Co-op, “is most likely representing the position of his superiors rather than his own”, he said in reference to a testimony given on August 6, by former board member Demetris Theodotou.

“It is obvious that there was political interference,” he continued. “But the law provides that the committee’s hearings are to be held open to the public and witnesses are therefore afraid to talk freely. If you say a few things more, it is likely to going to make you some enemies.”

The potential repercussions that keep people from speaking up are obvious, he explained. They are the rewards that may be denied to those speaking up but, on the other hand, are abundantly offered to those who look the other way.

Several witnesses testified in the committee that there were fixed majorities in the board, which favoured Hadjiyiannis before and after he became the bank’s top executive. His predecessor, the former chief executive officer (CEO) Marios Clerides, openly said more than two weeks ago that he felt undermined by Hadjiyiannis.

This, in turn, points – even if only indirectly – to the minister because he tolerated a situation which allowed a friend to get the highest paying job in a bank that taxpayers kept afloat for five years with €1.7bn.

Hadjiyiannis, it emerged at the committee hearings, was not even included in a shortlist of candidates for the position Clerides abandoned in 2015, fed up by the board’s meddling in executive affairs. Even amid reservations about whether Hadjiyiannis was fit and proper for the job, the finance ministry official Dionysis Dionysiou was behind “a lot of pressure” to support Hadjiyiannis in becoming CEO, according to ex-board member Theodotou. And all this followed a recommendation from Andreas Mouskallis, a former Akel deputy, football coach and representative of the former Co-op owners whose shareholding was diluted to below 1 per cent following decades of mismanagement.

“Because in certain cases, the board membership was the only or main source of income (of directors), this was taken advantage of,” said the anonymous economist, describing how the ruling political forces had directors toe the line.

“Testimonies so far do allow reaching conclusions, including how some people got there and how they subsequently acted,” the source added. “Hadjiyiannis agreed to go there and run the Co-op by bullying others. This has nothing to do with good corporate governance.”

Another source, an academic, said that the perceived political interference in the Co-op had not gone unnoticed at the European Central Bank’s (ECB) Single Supervisory Mechanism (SSM) and together with the slow pace in the reduction of the bank’s non-performing loans, this was a source of irritation.

“It is one thing for the (co-operatives) to become state owned in 2013, it is another not to follow any corporate governance protocol and make political appointments without explicit searches for qualified people to deal with a challenging task,” the academic said.

He added that while the Co-op’s model was based on ethical banking, the lender hired in 2015 and 2016 well-paid staff in an attempt to expand into corporate banking without having a specific strategy for this.

With all the above occurring while the finance minister oversaw the operations in the bank, “the government’s credibility will be suffering,” the academic source said.

An asset manager told the Sunday Mail that while the Co-op’s situation was difficult immediately after the banking crisis as a result of its weak loan portfolio, the Central Bank of Cyprus had failed to intervene by being stricter in approving government-proposed appointments and so reduce political influence in the bank.

“While there wouldn’t be a dramatic change even if you had hired (John) Hourican,” much may be blamed on the central bank which didn’t have a “hands-on” approach, which in turn left political interference unchecked, he said.

The asset manager was referring to Bank of Cyprus’ CEO, John Hourican, who aggressively pursued a reduction in its non-performing loans, as a result of which they were slashed to €8.3bn last March, roughly 55 per cent of what they were in December 2014.

The failure of a second bank in five years — after Laiki — further blemishes the reputation of Cyprus’ financial sector, wrecked by the massive depositor losses in 2013.

“I am told by lawyers and accountants that they avoid bringing funds to Cyprus as they don’t see a properly functioning banking system on the island,” the asset manager explained. “We need to establish one from scratch by giving the central bank more say. While the Co-op turbulence may be over, the stain is still there.”

And for that, the finance minister must take his share of the blame.

Georgiades was appointed in April 2013, days after Cyprus finally accepted its onerous bailout. The discipline in complying with its terms in the initial phase quickly paid off. In June 2014 — just 15 months after the bail-in on deposits — a triumphant finance minister could announce Cyprus’ first successful test of international markets with the issue of a government bond.

But it was also a fateful decision which sent signals in various directions. It reduced the international lenders’ leverage to enforce fundamental economic reforms because it also reduced the island’s reliance on bailout funds. And it also increased the appetite of the unions to successfully claw back perks and pay rises that had been put on hold or reduced in the immediate wake of the banking crisis.

In the process Georgiades seemed unable to prevent his transformation from a fiscal hawk to the flunkey of a populist president who could not resist the pressure of organised groups to the public finances.

The finance minister, who never misses an opportunity to decry “the practices of the past” which led to the financial crisis, last month had to make €128m in taxpayers’ money available to compensate Co-op workers.

US missionary thrust to the centre of Turkey-U.S. crisis