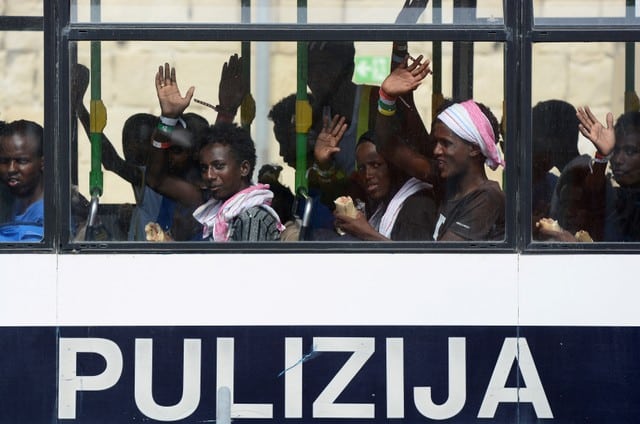 Migrants sit in a bus after disembarking from the MV Aquarius in the harbour of Valletta, Malta, August 15, 2018. REUTERS/Guglielmo Mangiapane TPX IMAGES OF THE DAY

Italian Transport Minister Danilo Toninelli on Sunday called for sanctions against Malta, accusing it of not rescuing migrant boats in the Mediterranean and leaving the burden to Italy, in the latest row between the two countries over the issue.

Toninelli said on Twitter the European Union had to open “its ports to solidarity” and take in migrants rescued at sea.

The government, made up of the anti-establishment 5-Star Movement and the far-right League, has pledged to crack down on migration, even though flows are now lower than in the past.

On Wednesday, Malta did not aid a boat carrying 190 migrants which was crossing international waters, saying it was not in distress. Once closer to the Italian island of Lampedusa, the Italian coastguard vessel Diciotti picked it up.

The Diciotti has been at sea off Lampedusa for the past four days as the countries argue over where it should dock.

“They are now on board a military vessel, which practically means on Italian soil. I expect that Italy would ask other EU states to help, it is up to them, but Malta followed international law,” Maltese Prime Minister Joseph Muscat said on Sunday in a radio interview.

Muscat did not comment on Toninelli’s call for sanctions.

The row was the latest tussle illustrating how politically fraught the issue of coping with seaborne migrants remains despite a migration deal EU leaders agreed on in June.

Over the past week Malta has rescued two boats in distress in its waters, one on Monday carrying 114 people and one on Saturday with about 60 migrants.

There have been other stand-offs between Italy and Malta.

In July, Malta rebuffed Italian pressure to aid a boat carrying hundreds of migrants in the Mediterranean.

Flows on one of the main migration routes into Europe – across the Mediterranean Sea from Libya to Italy – has tapered off as Libyan factions have cracked down on people smugglers.

But people are still dying at sea and summer is peak season for migrants attempting the crossing, often in overcrowded, unseaworthy boats.

Since taking office in June, Interior Minister Matteo Salvini has led a campaign to stop the activity of humanitarian rescue ships out of Italy’s ports and has toughened the stance on allowing ships to dock in the country’s ports.