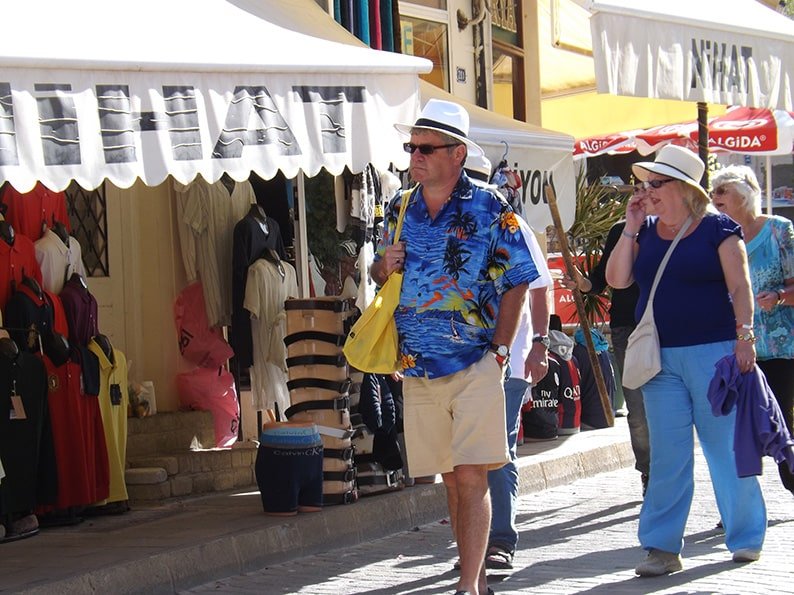 The situation was equally grim at stores in Kyrenia, Famagusta and in the north of Nicosia

AS GREEK Cypriots continued to cross to the north in their droves on Saturday to take advantage of the slide in the Turkish lira, the full force of the ongoing crisis was biting even deeper into the pockets of Turkish Cypriots causing them to fear for the future.

Despite authorities in the north attempting to keep the cost of living under reasonable control, and launching a series of measures late last week, the risk of inflationary pressure in the near term remains strong.

In the last week, officials from the ‘ministry of finance’, headed by Serdar Denktash have been bombarded with questions about pensions and social welfare benefits, import costs, fuel prices, falling consumer demand, rising rents, loan restructuring and a raft of other subjects.

“Turkey is coughing, we have pneumonia,” exclaimed Tanzel Nisam, an executive at a popular supermarket chain. “However, it is important to remember everyone is in the same boat,” she said, after totting up the cost of a dramatic week.

Supermarket owners claim they are at the front line of the battle to prevent runaway price rises, and expressed fury that many suppliers have hiked prices, whilst a few others had stopped deliveries altogether.

In the last year alone, there has been a 12 per cent increase in the price of basic commodities like bread, milk, eggs, yoghurt, sugar, salt, butter and cheese. There is also widespread speculation in the local media that the price of bread will rise this coming week.

“We have to admit Turkish Cypriots have become poorer by half, their buying power has fallen,” Nisam told Yeni Duzen.

Meanwhile, the full force of the currency slide can be seen everywhere. Several construction companies have halted credit sales, with deliveries of raw materials including timber, bricks and paint suspended, whilst a dozen suppliers froze taking new orders.

The situation was equally grim at stores in Kyrenia, Famagusta and in the north of Nicosia. Sacide Bayuk, a sales representative for Samsung, said some products would rise from 300TL to 500TL. “The increase in foreign currency affected us a lot. We are trying to keep our prices low, but people are afraid to spend money.”

In some shops, owners began limiting the sales of cigarettes to a maximum of three packets per customer, whilst a few other kiosk vendors pulled foreign tobacco from shelves altogether. “This situation has reduced the purchasing power of everyone,” businessman Ziv Alpturk complained. “Before the problem, I earned the equivalent of U$1000 now its U$500.”

For the thousands of Turkish Cypriots that cross the Green Line to shop in the Republic, visits to stores like Ikea, Lidl, and Jumbo became much pricier.

“We cross quite a few times every month at Ayia Nik and shop at Litsas using euros, obviously, this is now not really economically practical, so we have to wait and see what will happen,” said Hakan Turan, a Turkish Cypriot, who has recently returned to the island after living in Manchester. “We have got to live within our income. There are certain items we want from the south, for us, good milk, fresh meat and certain dog food brands are important. It has been a tough week.”

The panic around the repayment of loans is among the biggest concern since it is unpredictable what will happen next, especially due to the fact that the monthly instalments are on the verge of exceeding monthly income.

The option of selling or renting property to subsidise the difference is de facto off-the-tables since no one is willing to buy or rent given the economic instability. Indirectly, everything that is imported from abroad – including the goods that directly come from Turkey are purchased in foreign currency, meaning that their prices are gradually increasing as the lira falls, including basic goods such as medicines.

People are now at risk of not finding goods on the market at all and many are rushing to buy in bulk. Due to scepticism around the measures ‘the government’ might impose on the banks, some people are also trying to withdraw their savings from the banks.

Given this insecurity, people feel they are trapped in a situation that is out of their control and Turkish Cypriots are left to predict worst-case scenarios and to prepare for those. The announced measures have failed to prevent panic. Some are waiting for the Bayram holiday to pass, hoping that the US and Turkey will reach a compromise during the holidays.

Rifat Gunay, the head of the Turkish Cypriot ‘central bank’ insists financial institutions in the north have enough liquidity and has taken ‘concrete steps’ to extend loan payments for those who borrowed in foreign currency.

“This has offered some relief to debtors since it’s not possible for banks to fix the foreign exchange rate,” he told Radio Bayrak, adding those seeking new loans should do so in the currency that they are paid in.

On Thursday, Turkish Cypriot leader Mustafa Akinci met with political party leaders to discuss the situation, saying he was working with ‘coalition partners’ in good faith to minimise the impact of the crisis on the public, despite all areas of life becoming expensive for the residents of northern Cyprus. Akinci was quick to point out the Turkish Cypriot ‘central bank’ had no control over the Turkish lira, but said his administration would do their best to ‘ease conditions’.

“This is what we are genuinely trying to do,” Akinci told reporters. The direct loss from foreign exchange to his administration is estimated to be 500 million TL.

In addition, rents for homes and businesses would be paid based on a fixed exchange rate with foreign currencies, while exchange rates would also be fixed for private-school fees.

Even though the currency has slightly stabilised, the rhetoric in Turkey is still volatile. Ibrahim Kalin, a spokesman for President Erdogan, said: “There is a growing reaction in Europe against the Trump administration’s restrictive and punitive economic policies.” Kalin added that Turkey, France and Germany were ‘on the same page’ regarding their opposition to tariffs imposed by Washington.

“Misfortune makes strange bedfellows, so now Turkey is cosying up to Germany and France under the common complaint of US sanctions,” Turkey analyst Robert Ellis told the Sunday Mail. Ellis added that the threat of contagion had not only hit emerging markets but also Europe. “For example, Spanish, French and Italian banks are particularly exposed and German banks are owed $20.8 billion compared with $19.2 billion to Greece.”

At the centre of the US-Ankara spat is the dispute over two clergymen. Washington is calling for the release of US pastor Andrew Brunson, who is being held on disputed ‘terrorist charges’ in Turkey. Turkey, on the other hand, wants the US to extradite Turkish preacher Fethullah Gulen, who they blame for the coup attempt against President Erdogan in 2016.

Commentators agree that the crisis is pushing Ankara – a Nato member since 1952 – into the arms of Russia, despite the countries only recently resolving a severe low-point in relations after Turkey shot down a Russian fighter jet in 2015.

Meanwhile, Qatar pledged $15 billion in investments in Turkey and Russia’s foreign minister talked about using national currencies instead of the dollar in trade with Turkey. Erdogan’s government is adamant that it won’t need a bailout from the International Monetary Fund.

(Yagmur Izcan contributed to this article)

Tales from the Coffeeshop: Retreating from the silly season