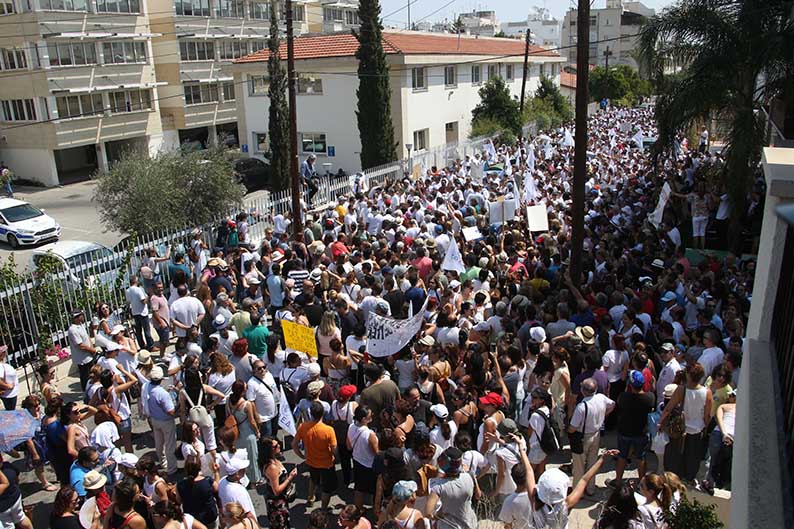 Teaching unions on Sunday asked Education Minister, Costas Hambiaouris, to delay their meeting next week a few days to give them time to study the proposals, regarding the measures for the streamlining of state schools, he included in a letter sent last week.

The unions also said the data the education ministry included in its documents were “incorrect and misleading.”

According to the Cyprus News Agency, unions Poed, Oelmek and Oltek on Sunday sent a preliminary letter to Hambiaouris in response to his Friday letter, which included a 30-page memo and an invitation to return to negotiations. This was a last-ditch attempt by the ministry to avert the indefinite strike threatened by unions, from the start of the new school year.

The dispute was triggered by the government’s decision in July to abolish the reduction of teaching hours with years of service and for extra-curricular activities. Teaching unions were outraged with this “arbitrary” decision and thousands of teachers took to the streets in July to protest.

They plan another demonstration at the end of the month, while also threatening an indefinite strike, which became a possibility after negotiations, held at the behest of President Nicos Anastasiades, broke down 10 days ago.

Hambiaouris had invited each union to a separate meeting on Monday and a joint meeting on Tuesday.  The unions asked to push back the meeting to Wednesday as they needed time to assess the material he sent them.

In Sunday’s letter of response, unions told the minister “many of the data you present in the appendices but also in the two letters you have sent us are not correct and are misleading.”

At Wednesday’s meeting, unions said they would present “the actual facts from the data published by the European Commission, ‘Eurydice’ report and from various other organisations.”

One of the main points, made by the education ministry in Friday’s letter, was that the public service commission had warned last year that unless cost rationalisation measures were introduced, the bulk of the state’s education budget, in the next five years would, be taken up by the teachers’ payroll. It also said that the government’s decisions regarding the reduction of teaching time with years of service affected only 13 per cent of the overall exemptions from teaching time.

Citing results of international and European surveys on education standards, the ministry reminded teachers that despite a greater percentage of state spending going on public education, “both the educational staff and schools fare worse than EU and OECD countries.”

Cyprus was one of the states that spent a comparatively bigger percentage of its annual budget on public education, it said. It had the sixth highest percentage of GDP allocated to education expenditure. This stood at 5.7 per cent of GDP, significantly higher than the 2016 EU average of 4.9 per cent.

It also said noted Cypriot teachers had fewer teaching hours and fewer pupils per teacher compared with other EU countries.

Some union members, however, insisted on social media that that data was inaccurate. Unions argue that the new measures would lead to 300 contract teachers losing their jobs. The ministry, however, said that this year there would be 159 more teachers appointed than last year. The total for the 2018-2019 school year is set to be 844, while last year 685 new teachers were appointed, it said.